On the Rise: Singapore Edition 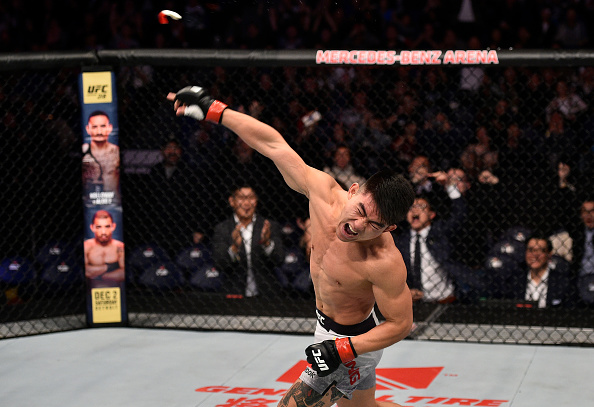 Song Yadong of China celebrates after his victory over Bharat Kandare in their featherweight bout during the UFC Fight Night event inside the Mercedes-Benz Arena on November 25, 2017 in Shanghai, China. (Photo by Brandon Magnus/Zuffa LLC via Getty Images)" align="center" />
Bright and early Saturday morning, the action returns to the Octagon for the first time since UFC 225 as 13 sets of combatants will step into the cage in Singapore for UFC Fight Night: Cowboy vs. Edwards.

Emanating from Singapore Indoor Stadium, the international event is headlined by a key matchup in the welterweight division pitting perennial contender and all-action gunslinger Donald Cerrone against Leon “Rocky” Edwards, the West Midlands man who has quietly racked up five straight victories to emerge as a threat in the 170-pound weight class.

Supported by a light heavyweight showdown between Tyson Pedro and Ovince Saint Preux and a crucial women’s flyweight clash between Jessica-Rose Clark and Jessica Eye, this weekend’s card should get your weekend off to an electric start.

In addition to the matchups noted above, Saturday’s event also features the promotional debut of one of the top prospects in the sport, as well as the return of two hopefuls looking to stand out in deep, talent-rich divisions.

Here’s a look at those athletes.

This is On the Rise: Singapore Edition.

Fighting out of Tiger Muay Thai & MMA, Yan garnered the attention of prospect watchers during his time competing under the ACB banner with his split decision loss to Magomed Magomedov in March 2016 introducing him to a wider audience. In the two years since that contest, the 25-year-old Yan has avenged that loss and earned two additional victories, pushing his record to 8-1 as he readies to step into the Octagon for the first time.

While bantamweight is brimming with talent, Yan has the opportunity to make an impact right out of the gate by collecting a victory on Saturday when he squares off with Teruto Ishihara, who has seen mixed results during his UFC tenure, but has become a fan favorite thanks to his flamboyant personality and aggressive approach inside the cage.

Beating “Yashabo” isn’t going to vault Yan into title contention right away, but it would establish a solid baseline for the Russian newcomer. Ishihara is a known commodity and a tough out, and for Yan to step into the Octagon for the first time and post a quality win over the 26-year-old would be an excellent way to start his UFC career.

The upper echelon in the 135-pound weight class is flush with quality contenders and battle-tested talents, so cracking the Top 15 will take time, but collecting a debut victory over someone like Ishihara would earmark Yan for bigger and better in the second half of 2018.

With 15 professional bouts under his belt already, it’s hard to believe that Song is only 20, but after beginning his career in 2013 and logging six appearances two years ago, the Chinese featherweight arrives for his sophomore appearance in the Octagon with an 12-4, 1 NC record overall and riding a four-fight winning streak.

His last victory came last November in Shanghai when he collected a first-round submission win over Bharat Khandare to cement his place on the UFC roster. Now he gets the opportunity to make a considerable jump up the list of contenders with a challenging assignment against Felipe Arantes.

The 30-year-old Brazilian has alternated between competing at featherweight and bantamweight during his UFC tenure, amassing a 5-5-1 record over his 11 appearances. Seasoned in the cage and savvy in all areas during the fight, “Sertanejo” is the type of talented veteran that can serve as a serious litmus test for his young opponent on Saturday.

If Song can roll into the Octagon and replicate his debut performance this weekend, he’ll not only position himself on the fringes of contention in the featherweight ranks, but also establish himself as one of the top young talents on the entire roster.

Selected to take part on Season 2 of The Ultimate Fighter: Latin America after racing out to a 4-0 start to his career, Aldana is poised to end a three-year hiatus and step into the Octagon for the very first time on Saturday when he steps in against Song Kenan.

A member of Team Gastelum during the 2015 competition, Aldana scored an opening round win over Alvaro Herrerra before falling to eventual runner-up Enrique Marin in the semifinals. Various things have kept the now 29-year-old on the sidelines since then, however that chapter of Aldana’s career closes this weekend.

Song scored a victory in his promotional debut last winter, knocking out Bobby Nash in 15 seconds to emerge as one of the standouts from the promotion’s debut event in Shanghai. Having already logged 17 fights, the 28-year-old welterweight is far more experienced than his Mexican opponent and an intriguing addition to the 170-pound ranks.

This has the potential to be Fight of the Night this weekend, and if Aldana can get his UFC tenure started with an eye-opening performance, it will make his extended hiatus a footnote in his story, rather than a key talking point.