On the Rise: Shanghai Edition

The non-stop month of November wraps up this weekend with the UFC’s first event on Mainland China, airing exclusively on UFC FIGHT PASS.

While this month has already produced a handful of stunning performances from established stars – the trio of new champions crowned at UFC 217, Dustin Poirier’s victory over Anthony Pettis, Matt Brown’s hellacious finish of Diego Sanchez – there have also been a slew of emerging prospects that have propelled themselves into the spotlight or taken another step forward in their development in the previous few weeks.

This weekend’s event offers an opportunity for another trio of talented upstarts to join the likes of Ricardo Ramos, James Vick, Tatiana Suarez and Tai Tuivasa on the list of breakout fighters for the month of November and claim their place amongst the collection of hopefuls to watch heading into 2018.

This is On the Rise: Shanghai Edition.

While older than most newcomers who garner the “prospect” designation, the 33-year-old Russian is one of the more intriguing additions to the UFC roster this year, and his debut matchup with Alex Garcia should provide an immediate indication of where Salikhov fits within the welterweight hierarchy.

A five-time world champion in Wushu Sanda and an International Master of Sports in Sanshou, Salikhov owns an insane 185-13-1 record as a kickboxer and carries a 12-1 mark as a mixed martial artist into his first foray into the UFC cage this weekend. In his two most recent outings, the “King of Kung Fu” has earned back-to-back stoppage wins over UFC veterans Ivan Jorge and Melvin Guillard, finishing both with spinning techniques that deserve to be watched multiple times because they’re so breathtaking.

Dropping him in against Garcia this weekend is the perfect way to measure where his floor sits in the 170-pound ranks, as the Dominican-born, Montreal-based competitor is a powerful wrestler with dynamite in his hands that is entrenched in the middle of the division. A strong showing Saturday could earn Salikhov entry into the express lane towards contention, especially if he’s able to deliver another highlight reel finish. 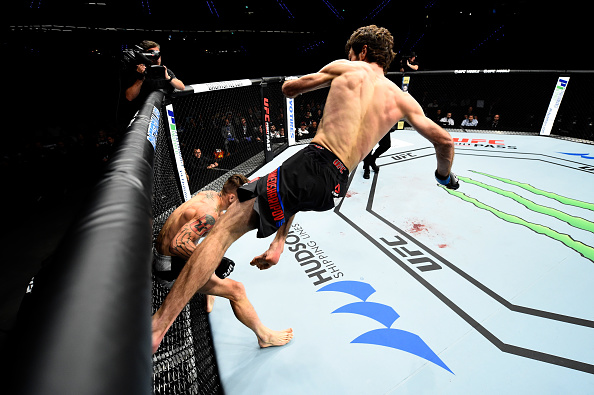 It’s easy for emerging talents from renowned camps to get over-sold and then under perform once they hit the Octagon for the first time. That wasn’t the case with the man everyone just addresses by his first name when he debuted in the UFC back in the fall.

A highly touted prospect from the Ricardo Almeida/Mark Henry/Iron Army crew, Magomedovsharipov entered his promotional debut opposite Mike Santiago with lofty expectations. Brandishing a 12-1 record, an eight-fight winning streak and famous teammates quick to sing his praises, the 26-year-old was positioned as a future featherweight contender and he showed why, collecting an impressive second-round submission win over the Dana White’s Tuesday Night Contender Series alum in Rotterdam in September.

Huge for the division and boasting a frightening blend of submission skills and crisp striking, Magomedsharipov has already put himself on the radar in the 145-pound division and could be someone who starts making a run at the top of the division next year if everything goes as planned in Shanghai on Saturday night.

Moraes is the man standing between Magomedovsharipov and second UFC victory this weekend and the 27-year-old Brazilian with a 9-1 record has the potential to usurp his opponent’s place on the fast track to success and stardom in the featherweight division.

A former bantamweight title contender under the World Series of Fighting banner, Moraes’ only loss came in his championship bout with Marlon Moraes (no relation), who has also since migrated to the Octagon and established himself as a formidable threat in the 135-pound division. Since then, the Blackhouse representative has earned consecutive victories over veteran stalwarts Robbie Peralta and Luis Palomino, setting the stage for this weekend’s showdown with Magomedsharipov.

The featherweight is at an interesting crossroads at the moment – brimming with emerging talent, but still flush with established, competitive veterans as well – so a matchup like this against a fellow upstart will go a long way in figuring out where Moraes fits within that collective and how high he might potentially climb in the years to come.