On the Rise: Sao Paulo Edition 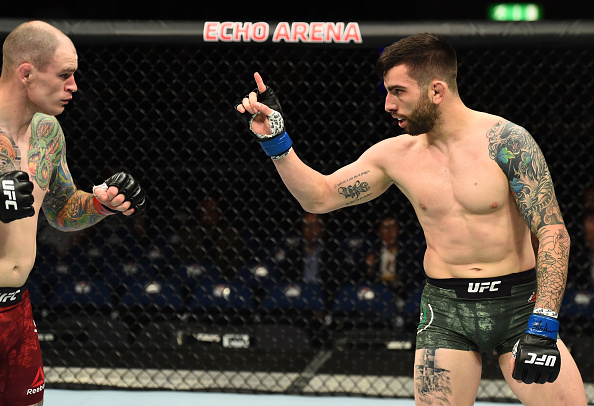 Last weekend’s debut in Moscow, Russia was a rousing success, with the 12-fight card delivering several impressive performances, introducing the world to Jin Soo Son and culminating in Aleksei Oleinik finding Mark Hunt’s neck to close out the night with back-to-back submission wins.

Now this week, the Octagon shifts to Sao Paulo, Brazil for the seventh time as the Ginasio do Ibirapuera plays host to a massive 14-fight event on Saturday night.

Though bitten by the injury bug, Saturday’s card remains intriguing, with a collection of veterans joining several newcomers on the bill.

But the most compelling element of this weekend’s fight card – at least in my opinion – is the host of new arrivals who will be stepping into the Octagon for the first time and the relative neophytes looking to continue making an impression on the audience.

Saturday’s card features eight fighters with two or fewer UFC appearances, including three athletes who earned victories on the all-Brazilian edition of the Contender Series, one competitor who appeared in each of the first two domestic seasons of the summer smash hit and a returning lightweight looking to make a splash in his return to the Octagon.

And because this card is so rich with fresh talent, none of those combatants made the cut for this week’s installment of this series.

Here’s a look at the trio who did.

This is On the Rise: Sao Paulo Edition.

Carlo Pedersoli, known professionally as Bud Spencer, was a two-time Olympian who went on to become a successful actor, known for making various films with his long-time film partner Terence Hill.

His grandson, Carlo Pedersoli Jr., is an 11-1 welterweight who arrived in the UFC on a seven-fight winning streak and extended his run of success to eight with a short-notice, split-decision victory over Brad Scott four months ago in Liverpool. Now he’s back for a second replacement opportunity, looking to make a serious splash in the welterweight talent pool by taking on Alex “Cowboy” Oliveira in Saturday’s penultimate contest.

The 25-year-old newcomer used a lot of kicks in his bout with Scott, keeping the former finalist on “The Smashes” at range and showing impressive conditioning given that he was a month removed from a hard-fought split decision victory over UFC vet and European standout Nicolas Dalby.

Pedersoli got the call to fight on Saturday’s card late last month, filling in for Neil Magny after the Elevation Fight Team member was pulled to face Santiago Ponzinibbio in the main event of November’s debut event in Buenos Aires, Argentina.

He’s already proven that he’s capable of pulling out a victory on short notice and going 15 hard minutes if needed and if Pedersoli is able to pull off the double by downing Oliveira, he’ll vault himself into the Top 15 in the welterweight division.

While it’s coming six weeks later than he had hoped, Ewell is set to make his Octagon debut this weekend, venturing to Brazil to take on Renan Barao in what could very well be a must-win fight for the former bantamweight champion.

Fighting out of Riverside, California, the 30-year-old Ewell was hoping to get the call to compete at UFC 227 in Los Angeles, but is more than happy to venture into enemy territory in search of his first UFC victory.

Riding a four-fight winning streak that includes three first-round stoppages and a third-round submission win and boasting a victory over UFC veteran Willie Gates, “Mr. Highlight” intends on bringing the fight to Barao and making an instant impression on the bantamweight division.

After struggling to find consistency early in his career and amassing a 5-3 record through his first eight appearances, the former high school track star has rattled off eight victories in his last nine fights while only going the distance once. Should he keep his run of success going through the weekend, Ewell will enter the final quarter of 2018 as one to watch in the 135-pound weight class.

Originally scheduled to make her UFC debut in February against Jessica Aguilar, Souza will finally step into the Octagon for the first time this weekend, taking on Alex Chambers in Saturday’s opener.

Following a 7-0 run on the Brazilian regional circuit, Souza rolled into Invicta FC and claimed the promotion’s strawweight title in her debut, submitting Katja Kankaanpaa in the fourth round to earn the strap. Following a blistering first-round stoppage win over DeAnna Bennett in her first title defense, Livinha dropped the title to Angela Hill by split decision in an ultra-close contest that could have gone either way.

Fully recovered from the hand injury that forced her from her bout with Aguilar in Austin, Texas, the ultra-confident 27-year-old aims to continue rolling as she squares off with Australia’s “Astro Girl,” a TUF 20 cast member who has struggled to find success since joining the UFC roster.

Strawweight is abuzz with excitement right now on the heels of electric performances by Tatiana Suarez and Jessica Andrade earlier this month at UFC 228 and Souza has the talents to add to here. Aggressive on the feet and dangerous on the ground, the Sao Paulo native has the potential to start the night in thrilling fashion on Saturday and set the tone for an entertaining evening inside the Octagon.