Featuring a solid mix of veteran talent and up and comers, it has the potential to be a sleeper hit like last month’s mid-week affair in Sioux Falls, South Dakota, which might have been the most consistently entertaining event out of the six shows that ran in July.

This weekend’s event at the Vivint Smart Home Arena also features a trio of emerging stars that you’re going to want to start paying serious attention to right now, if you haven’t already.

Here they are in the latest edition of On The Rise.

The featherweight winner from the first season of The Ultimate Fighter Latin America, Rodriguez has added three more victories to his resume, progressing up the competitive ladder with each successive triumph. Last time out, the 23-year-old taekwondo black belt connected with a highlight reel flying head kick to knock out Andre Fili and earn himself a Performance of the Night bonus, announcing to the division that “El Pantera” was ready to take the next step forward in his development.
RELATED CONTENT: Rodriguez is El Pantera | Free Fight: Rodriguez vs Fili | Matchup with Caceres | Fighter bio

While comparing developing fighters to established names is always tricky, watching Rodriguez operate in the Octagon, you see flashes of various former champions and superstars – the aerial creativity of Anthony Pettis; the instinctive unpredictability of Jon Jones; the speed and force of Jose Aldo. In a division where Max Holloway has blossomed into a tactical, punishing contender right before our eyes, it’s easy to see the same potential for growth in Rodriguez as he continues to gain experience and log more time in the cage.

Saturday’s main event assignment against Alex Caceres will be a quality litmus test for the Mexican standout that now calls Chicago home. “Bruce Leeroy” is coming off his best performance to date and finally seems to be putting all the pieces together under the guidance of John Crouch and the team at the MMA Lab.

Another strong showing in Salt Lake City and a fifth consecutive UFC victory will elevate Rodriguez in the rankings and close the book on his days as a prospect on the rise, so consider this your last chance to get on the bandwagon while you still can. 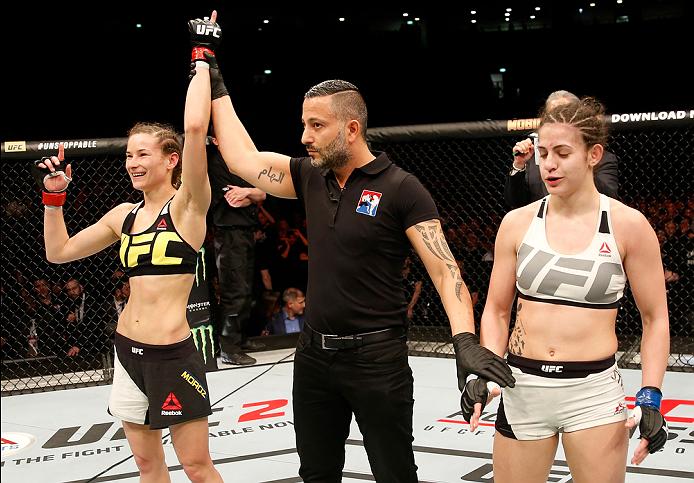 We try to keep the names fresh in this column, only doubling up with an athlete in those rare cases where maybe you weren’t paying close enough attention or didn’t fully buy in to their rising stock the first time around. That’s why you got a second helping of Francis Ngannou before his first-round technical knockout win in Chicago last month and why you’re catching another reminder about the “Iron Lady.”

Moroz was thrown into the deep end of the strawweight division right out of the gate, and after upsetting Joanne Calderwood and falling short against Valerie Letourneau, she’s now settling into that comfortable zone inexperienced talent need to live in for a while as they log reps in the cage.

Having gotten back into the win column earlier this year with a victory over Cristina Stanciu, Moroz looks to make it two in a row this weekend against newcomer Danielle Taylor as she continues adding polish to her raw, but well-rounded, skill set.
RELATED: Matcups - Moroz vs Taylor | Ishihara vs Gutierrez | Fighter bios - Moroz | Ishihara

Flamboyant and fun-loving, Ishihara could become a household name on his personality alone, as the 25-year-old Japanese competitor is as charismatic as they come, whether there are cameras rolling or not. But there is more to get excited about with Ishihara than just his over the top personality.

The young fighter, who fought veteran Mizuto Hirota to a split draw in the finals of the Road to UFC Japan competition in September 2015, showed his knockout power in his follow-up win over Julian Erosa in March at UFC 196. Of his eight career victories, the last seven have all come by way of TKO stoppage and as his bout with Hirota showed, Ishihara has no problem taking one to land one inside the cage.

This weekend, Ishihara squares off with TUF Latin America Season 2 lightweight finalist Horacio Gutierrez in hopes of securing a second straight UFC victory. If he’s able to turn in another impressive showing and make waves on the microphone again, don’t be surprised if “Yashabo” quickly becomes a lot of people’s new favorite fighter.