On the Rise: Sacramento Edition

Coming off an electric night in Toronto, the scene shifts to Sacramento this weekend for the penultimate UFC event of 2016 and a FOX card featuring both an assortment of familiar names and a bevy of emerging threats worth keeping an eye on.

While this column is dedicated to focusing the spotlight on the up and coming competitors set to hit the Octagon, I would be remiss if I didn’t use this opportunity to offer a quick “Congrats on everything you’ve done and enjoy your retirement” shout out to “The California Kid,” Urijah Faber, who will hang up his four-ounce gloves following his bout with Brad Pickett on Saturday.

In a way, it’s fitting that Faber gets a shout out in a column of this nature because throughout his career, the affable, entertaining competitor has always made a point of shining a light on the younger fighters climbing the ranks at Team Alpha Male and this weekend’s card is headlined by one such fighter, Paige VanZant.

All the best, Faber!

Here are three fighters to watch this weekend.

This is On the Rise: Sacramento Edition.

Two fights into his UFC tenure – and just three bouts into his professional career – there are bound to be people who still consider Gall a novelty act; a kid plucked from obscurity because he asked for an opportunity at the right time and has managed to beat a pair of neophytes to maintain his spot on the roster.

While none of that is incorrect, it also feels like it sells the New Jersey native short as well, as it’s not like Gall has struggled through his bouts with Mike Jackson and CM Punk. He’s needed three minutes less a tick to get through the two of them and made similarly quick work of Ron Templeton the night Dana White was in the building in Philly, meaning the 24-year-old is stepping into the cage and handling his business quickly and efficiently.

He’s also someone that clearly gets how to “play the game” and that adds to his “must follow” factor going forward. After calling out and quickly submitting Punk, Gall turned his attention to Sage Northcutt, begging for a chance to face the spiky-haired human action figure from Katy, Texas in a battle of young upstarts. He got his wish and now, just like in his bout with Punk, the confident young talent needs to keep showing his critics he’s much more than a guy that can beat MMA novices.

Whether you want to call him “Bam Bam” or “The Prospect Killer,” the key is that you know Bryan Barberena’s name, know that he’s competing this weekend and know that he’s someone you definitely should be keeping your eye on. 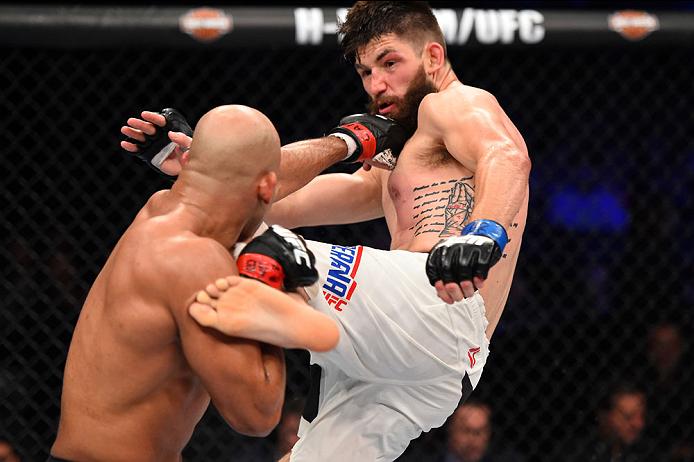 Night effort as a follow-up, the MMA Lab product has produced consecutive victories over Sage Northcutt and Warlley Alves to establish himself as the guy you don’t want to match your welterweight hopefuls against. With those victories, Barberena banished each hopeful from the ranks of the unbeaten, elevating his standing in the process.

This time out, the 27-year-old gets a chance to prove he’s a potential contender when he takes on Colby Covington, the hard-nosed American Top Team product who rebounded from a loss to Alves to record back-to-back stoppage wins over Jonathan Meunier and Max Griffin. If “Bam Bam” can add another win to his total and halt Covington’s quality run in the Octagon, he should remove himself from bouts against upstarts in favor of contests against established contenders in 2017.

Following in the footsteps of Alexa Grasso, her teammate at Lobo Gym in Guadalajara, Aldana graduates from Invicta FC to the Octagon for an instant litmus test against scrappy veteran Leslie Smith that has Fight of the Night potential written all over it.

While Grasso hit the UFC with more hype and an unbeaten record, Aldana is undeniably one to watch in the 135-pound weight class, as she sports real power and continues to show growth and development every time she hits the cage. Debuting with a strong performance against someone as battle-tested as Smith would be a great way to introduce herself to the UFC audience and set herself up for a marquee opportunity in 2017.