On the Rise: Prague Edition

There is a trio of lesser-known talents with the potential to steal the show readying to step into the Octagon this weekend in Prague.
By E. Spencer Kyte • Feb. 18, 2019

The UFC makes its 2019 European debut this weekend as the Octagon lands at the O2 Arena in Prague, Czech Republic for a 13-fight card capped by a clash between light heavyweight contenders Jan Blachowicz and Thiago “Marreta” Santos.

Saturday’s event features a collection of familiar names from the region, as well as a host of up-and-coming European talents looking to use this opportunity to catapult themselves to bigger and better opportunities as the year progresses.

While the headliners will command the most attention and plenty of people will be paying close attention to the continued ascent of bantamweight up and comer Petr Yan, there is a trio of lesser-known talents with the potential to steal the show readying to step into the Octagon this weekend in Prague.

This is On the Rise: Prague Edition.

After going 2-2 in four starts as a bantamweight, the 24-year-old Pudilova drops down to flyweight for the first time in her UFC career and gets an opportunity to make an instant impact by squaring off with veteran stalwart Liz Carmouche.

In each of her four previous Octagon appearances, Pudilova has shown tremendous toughness and a willingness to step into the fire and trade. Although she dropped her promotional debut, many believed she did enough to edge out Lina Lansberg (including Lansberg), and the Czech native rebounded by registering a pair of clear decision wins over Ji Yeon Kim and Sarah Moraes.

Last time out, Pudilova landed on the wrong side of a split decision against Irene Aldana in a back-and-forth affair that earned Fight of the Night honors at UFC 228.

Moving down the scale opens up new possibilities for Pudilova, who has always appeared slightly undersized while fighting at bantamweight. If she can maintain the same levels of output and aggression that highlighted her time at ’35, Pudilova has a chance to emerge as a contender right out of the gate as Carmouche is one of the most seasoned competitors in the division and entrenched in the Top 10.

How’s this for a trial by fire?

Just 22 years old and making his UFC debut, Naurdiev gets the opportunity to immediately disrupt things in the welterweight division in a matchup with surging Brazilian Michel Prazares, who has kept on rolling since relocating from lightweight, pushing his winning streak to eight.

Did I mention he took the bout on short notice?

Known as “The Austrian Wonderboy,” Naurdiev carries a 17-2 record into his promotional debut in Prague, including a win over one-time UFC competitor Benny Alloway. He’s picked up back-to-back first-round stoppage wins since having his 11-fight winning streak snapped following that bout with “Benny Blanco,” needing less than four minutes combined to earn the tandem victories.

This is a massive step up in competition for Naurdiev, as Prazares boasts a 26-2 record overall, including 10 victories from a dozen trips into the UFC cage. But it’s also a massive opportunity for the young newcomer, as a win over Prazares would catapult the Austrian freshman into the thick of things in the welterweight ranks. 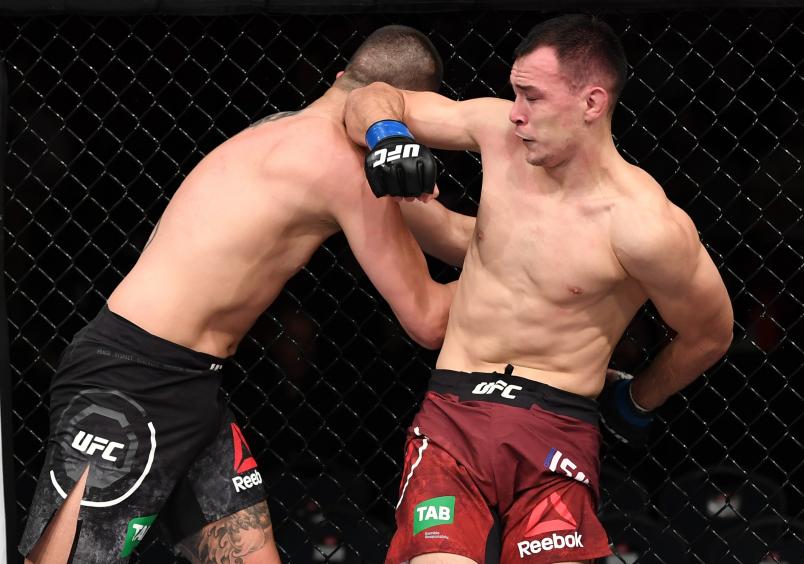 ADELAIDE, AUSTRALIA - DECEMBER 02: (R-L) Damir Ismagulov of Russia lands a spinning back elbow against Alex Gorgees of Australia in their lightweight bout during the UFC Fight Night event inside Adelaide Entertainment Centre on December 2, 2018 in Adelaide, Australia. (Photo by Jeff Bottari/Zuffa LLC/Zuffa LLC via Getty Images)

ADELAIDE, AUSTRALIA - DECEMBER 02: (R-L) Damir Ismagulov of Russia lands a spinning back elbow against Alex Gorgees of Australia in their lightweight bout during the UFC Fight Night event inside Adelaide Entertainment Centre on December 2, 2018 in Adelaid

Fresh off a decision win in his promotional debut in December, Ismagulov makes a quick return this weekend, diving into his sophomore appearance in the opener against newcomer Joel Alvarez.

Last time out, Ismagulov ran his own winning streak to an even dozen, collecting a victory over Alex Gorgees in Adelaide, Australia back in December. The Kazakhstan-born lightweight took that fight on short notice, jumping at the chance to fill in for the injured Ross Pearson against Joe Duffy before the Irishman was felled by an injury as well.

Now, with the benefit of a full camp under his bout and no changes to contend with, the 28-year-old has the opportunity to deliver an even more emphatic and impressive performance in his second foray into the Octagon.

Alvarez carries a 15-1 record and a 10-fight winning streak into his UFC debut, with each of his victories coming by way of stoppage, including a variety of chokes. If Ismagulov can halt his momentum, score a second straight UFC triumph and run his winning streak to a baker’s dozen, he’ll set himself up for a move up the fight card and a bout with a more familiar name next time out.