On the Rise: Ottawa Edition

There are a number of up-and-coming talents and promising new arrivals set to step into the Octagon this weekend. Here’s a closer look at three of those competitors. This is On the Rise: Ottawa Edition.
By E. Spencer Kyte • Apr. 29, 2019

Three years after venturing to the Canadian capital for the first time, the Octagon returns to Ottawa this weekend with a 12-fight card headlined by a pivotal lightweight matchup between two all-action, crowd favorites — Al Iaquinta and Donald “Cowboy” Cerrone.

Cerrone is one of only two fighters on this weekend’s fight card to have competed the first time the UFC touched down on the banks of the Ottawa River, having picked up a third-round stoppage win over Patrick Cote in the co-main event of that initial show, while Elias Theodorou outworked Sam Alvey the first time through the city and he takes on Derek Brunson in the penultimate pairing this time around.

While the focus will be on the familiar names closing out the card and dotted throughout the rest of the matchups, there are also a number of up-and-coming talents and promising new arrivals set to step into the Octagon this weekend in hopes of having this be the next step in their journey to capturing UFC gold.

The Main Card of UFC Ottawa Is An ESPN+ Exclusive | Start Your Free Trial Now!

This is On the Rise: Ottawa Edition.

What — you thought because the event was taking place in Canada and I too am Canadian that this would be an All-Canadian affair?

As much as I would have liked to shout out one more fellow Canuck, there was no way to overlook the 24-year-old heavyweight newcomer, who makes his UFC debut this weekend against “The Big Ticket,” Walt Harris.

Spivac was tagged in after Aleksei Oleinik was pulled into a pairing with Alistair Overeem a couple weeks ago in Russia, and while that fight didn’t go so well for the veteran grappler, this is an intriguing matchup and tremendous opportunity for the undefeated Moldovan.

Standing six-foot-three and sporting a perfect 9-0 record with nine stoppages, Spivac is one of those quintessential “not sure what we’ve got, but can’t wait to find out” fighters emerging from the Eastern European regional scene.

Winning nine straight fights at any level is difficult and getting nine consecutive finishes increases the degree of difficulty exponentially, and while he’s beaten a few unknowns, he’s also shared the cage with two of the most seasoned heavyweight veterans on the planet, Tony Lopez and Travis Fulton, submitting each in the opening round.

I know it sounds crazy to some people for me to be intrigued by someone who handed Lopez the 29th loss of his career and spoiled Fulton’s 318th professional appearance, but they’re the type of cagey veterans who dispatch pretenders pretty much every other weekend, so Spivac getting through both with ease says a little something.

Harris will be a true litmus test for the newcomer, as he enters on a two-fight unbeaten streak. If Spivac can keep his winning streak intact through the weekend, the heavyweight division will have another intriguing name in its ranks for fans to keep track of going forward. 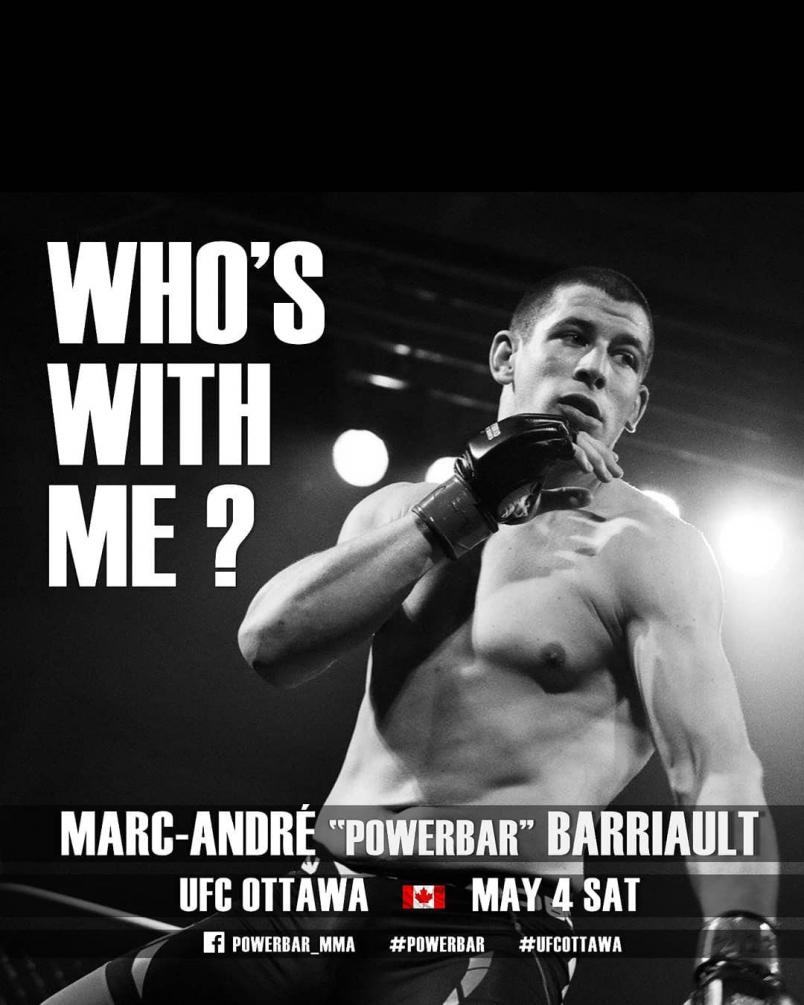 A two-division (middleweight and light heavyweight) champion under the TKO banner, the 29-year-old Barriault makes his promotional debut this weekend against former TUF winner Andrew Sanchez in a middleweight contest that will tell people a lot about both fighters.

Unbeaten in his last eight fights, Barriault has beaten a collection of top Canadian competition over the last three years, winning the middleweight belt by beating Strahinja Gavrilovic for a second time, successfully defending it against Brendan Kornberger and then claiming the vacant light heavyweight strap with a first-round stoppage win over Adam Hunter last September.

The Quebec City native has shown he has the conditioning to go the distance in a hard-fought, five-round championship fight and also packs the kind of pop that makes him a threat to end every contest in a hurry.

After suffering back-to-back losses in 2017, Sanchez rebounded with a strong showing against Markus Perez in his lone appearance of 2018 and looks to build on it here. “El Dirte” is a suffocating grappler with the strength, experience and savvy to shut down less seasoned foes and could very well spoil the French-Canadian’s first foray into the UFC cage.

But if Barriault can topple the TUF 23 light heavyweight winner, it will instantly set a strong baseline for him in the 185-pound weight class and send him into the second half of 2019 in prime position to face another entrenched middleweight in his sophomore appearance in the Octagon.

Called in to replace Brian Kelleher opposite fellow Canadian Mitch Gagnon, Smith has a perfect 6-0 record as the latest champion from British Columbia’s Battlefield Fight League promotion to earn a call up to the UFC.

Training out of The Sound MMA in Squamish while adding reps in Thailand, Smith claimed the BFL bantamweight belt with a dominant performance against Tyler Dolby in his third professional fight, submitting the ZUMA representative in the just three minutes. Since then, he’s added two more wins to his resume to establish himself as one of the top prospects in the country.

The matchup with Gagnon, which kicks off the festivities at Canadian Tire Centre on Saturday, is an interesting one as the veteran from Sudbury, Ontario has been out of action since UFC 206 and hasn’t picked up a win since October 2014. After more than two years on the sidelines dealing with injuries, it’s hard to forecast how the 34-year-old Gagnon will look on Saturday.

Smith is an aggressive, punishing grappler with good size and strength for the division and if he rolls into Ottawa and performs the way he has in his last several appearances under the Battlefield banner, “The Cole Train” will keep chugging along.