On the Rise: Mexico City Edition

Coming off an exhilarating night of fights at T-Mobile Arena in Las Vegas, the action shifts 1,750 miles (give or take) south to Mexico City for UFC Fight Night: Pettis vs. Moreno.

While the rudos and technicos from AAA will take over Mexico City Arena later this month for Triplemania XXV, this weekend the fighting is real and takes place inside the Octagon with a 12-fight card heavy on up and comers looking to establish themselves on the biggest stage in the sport, and capped by bouts featuring two of Mexico’s top rising stars, Alexa Grasso and Brandon Moreno.

Here’s a look at some of the emerging talents aiming to make a name for themselves this weekend.

This is On the Rise: Mexico City Edition. 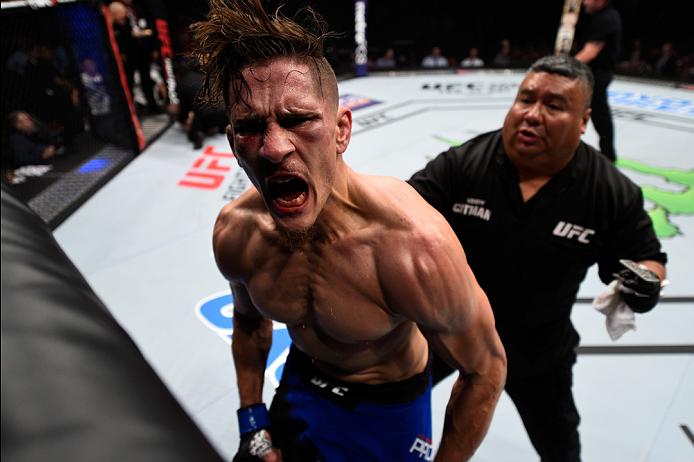 The 27-year-old welterweight has looked very good through his first two Octagon appearances and carries a 10-fight unbeaten streak into his showdown with Alan Jouban on Saturday.

After racking up eight straight win on the Florida regional scene, Price made an immediate impact in the 170-pound weight class back in December at UFC 207 when he stormed into the cage and submitted Brandon Thatch in the opening round. Five weeks later, he fought Alex Morono on his home turf in Houston, Texas, picking up a second straight stoppage win that was later deemed a no contest when Price tested positive for marijuana.

Overturning the decision doesn’t do anything to diminish the performance “The Hybrid” delivered in Houston, who rallied after getting stung late in the first round to put Morono away at the close of the second. The American Top Team product has only gone the distance once, has demonstrated a well-rounded skill set to this point in his career and there is clearly room for him to grow.

Jouban is a sharp step up in competition for Price, having already made nine appearances under the UFC banner as he’s worked his way to the brink of breaking into the Top 15. A victory here would surely be the biggest of the Cape Coral, Florida native’s career and put Price in a position to join the crowded push towards contention in the welterweight ranks going forward.

“Toro” worked his way into the finals of Season 3 of The Ultimate Fighter: Latin America, where he proved himself to be someone to keep tabs on by taking the fight to Claudio Puelles and putting him away less than two minutes into the second round. Now back at his natural featherweight, Bravo looks to go 2-0 in the UFC and push his record to 13-0 overall when he squares off with Humberto Bandenay this weekend.

The 23-year-old Bravo is a bundle of raw potential – tall for the division with good hands, proven power and an opportunistic submission game. He’s only seen the scorecard twice thus far, which can be a strong positive indicator for possible growth in the future because while he hasn’t faced elite competition as of yet, Bravo has been posting strong performances and stacking finishes. 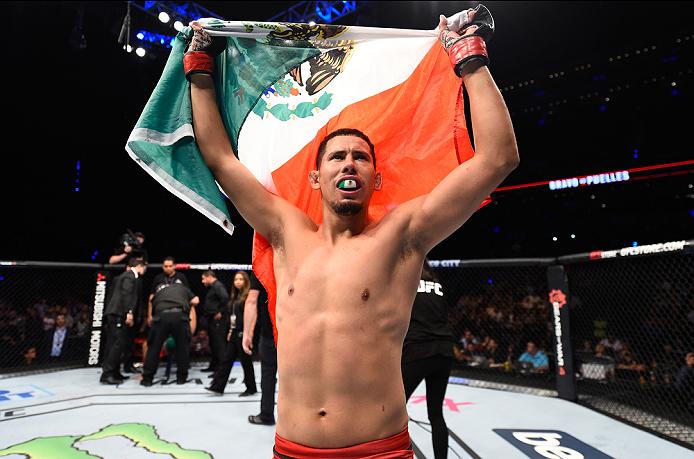 Bandenay replaces TUF alum Chris Gruetzemacher and enters on a five-fight winning streak, all of which have come by way of stoppage. Like Bravo, he’s been quickly racking up experience on the regional ranks despite being in his early 20s and he should test the former TUF Latin America winner on Saturday.

But with a host of his fellow Entram Gym teammates competing on the card and backed by what is sure to be a raucous crowd at Arena Mexico City, don’t be surprised if “Toro” turns in the best performance of his career this weekend.

Morales is more than just the latest member of Team Alpha Male to arrive in the UFC – he’s an undefeated flyweight prospect who has garnered the Urijah Faber seal of approval, which is more than just an endorsement from the team captain.

The recent inductee into the UFC Hall of Fame always backs his guys, but Faber has also made a point of telling anyone who will listen about the real blue-chippers coming from the Sacramento-based fighter factory. The two most recent recipients of Faber’s advanced praise were TJ Dillashaw and Cody Garbrandt, both of whom went on to win UFC gold.

Boasting an 8-0 record with six finishes, the 22-year-old has been training with Faber & Co. for a dozen years and he gets the call to the Octagon after earning a second-round stoppage win over East Coast regional standout Sean “Shorty Rock” Santella in March. Saturday night, Morales squares off with fellow unbeaten prospect Roberto Sanchez, who has picked up six submission wins in seven appearances, all of which have come with the Legacy Fighting promotion.

Given the track record of guys coming out of the Alpha Male camp and Faber’s history of highlighting standouts emerging from his gym, you might want to pay close attention to Morales on Saturday and in the future.