On the Rise: Melbourne Edition

The next stop in the journey to the final event of 2016 brings the Octagon back to Melbourne, where 12 months of shocking upsets and record-setting events kicked off last year at UFC 193.

This time around, the UFC is back with a Fight Night card loaded with local talent and fighters looking to use this year’s stop in Melbourne as a launching pad to greater opportunities in 2017 the way Holly Holm did last year.

Granted, none of them are fighting for championship gold against one of the biggest stars in the sport, but breakthrough performances come in all shapes and sizes and this weekend promises to have a couple.

Here are three fighters capable of shining and emerging from the shadows on Saturday.

“The Hulk” has been smashing the competition on the regional circuit for the last several years, compiling a 10-fight winning streak heading into his promotional debut opposite Yusuke Kasuya this weekend.

Volkanovski has shown serious power during his extended winning streak, collecting six of his 10 victories by way of knockout or technical knockout, adding three submissions into the mix to cement his standing as a finisher. Those instincts and the fact that his power is of the “one-and-done” variety make him an interesting addition to the deep and talented 155-pound ranks.

While headliner Robert Whittaker is currently carrying the torch for Australia as the country’s top talent in the UFC, the second position is up for grabs and a dominant showing in his first Octagon appearance could fast track the lightweight newcomer into the running to fill the vacancy. 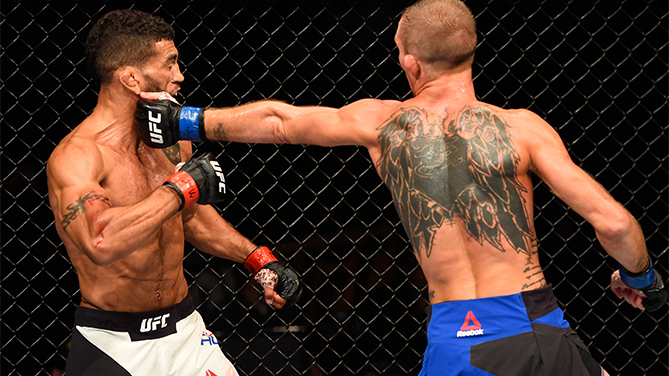 After debuting in the UFC on short notice against Japanese veteran Tatsuya Kawajiri last December, Knight rebounded with a strong performance that channeled the Diaz Brothers against Jim Alers in July.

From the outset, “The Kid” was chirping at Alers, calling him into exchanges and talking smack as he crashed home combinations and kicks en route to winning a split decision and Fight of the Night honors. He’s back at it this weekend against New Zealand’s Dan Hooker in another matchup that should be electric from start to finish.

Knight, who is a protégé of former UFC middleweight Alan Belcher, has good size and a well-rounded skill set, collecting the majority of his 17 career wins by stoppage while displaying smooth, quick hands. If he can string together a couple more wins and continues to light up social media with his mid-fight smack talk, he could find his way into more high profile pairings in 2017.

When the highlight of your first fight is telling your mom to “shut up” on live television – while getting worked over on the mat – the opportunity to return to action probably can’t come quick enough.

A work in progress who turned pro a couple years ago after scoring six straight victories in the amateur ranks, Rountree Jr. was one of the favorites on Season 23 of The Ultimate Fighter, but was upended early by Syndicate MMA teammate Cory Hendricks. He eventually tagged back into the competition when Hendricks was forced out with an injury and advanced to the finals against Andrew Sanchez, but he ended up on the business end of a one-sided contest against “El Dirte.”

Rountree still carries a ton of upside and doesn’t turn 27 until February, so the potential is there for him to continue patching the holes in his game and show off his offensive weaponry more going forward. This weekend’s showdown with unbeaten newcomer Tyson Pedro is as good a starting point as any.