On the Rise: Liverpool Edition

The final stop on the UFC’s International tour this month takes place this Sunday at Echo Arena in Liverpool, England, marking the first time the Octagon has touched down on the shores of the River Mersey and the 23rd time the company has delivered a fight card in the United Kingdom.

While the highlight of this event is the homecoming, headlining assignment for Darren Till opposite Stephen Thompson, Sunday’s fight card also offers an opportunity to get another look at a collection of emerging fighters, potential contenders and promising newcomers in the middle of the afternoon.

This is On the Rise: Liverpool Edition. 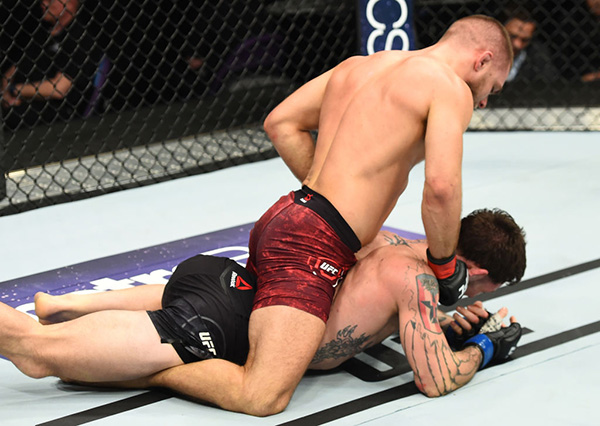 After debuting in the UFC on short notice and holding his own fighting up in weight against Michel Prazeres before ultimately getting submitted in the third round, Denmark’s Burnell rebounded with a unanimous decision victory over Mike Santiago in his sophomore appearance in the Octagon earlier this year.

Now the 24-year-old grappler gets a chance to make a splash in the stacked featherweight division by taking on British upstart Arnold Allen, who enters on a five-fight winning streak punctuated by a split decision win over Makwan Amirkhani in March of last year.

Though he’s been out of action for more than 12 months, the 12-1 Allen is regarded as one to watch in the 145-pound weight class and if Burnell can step into the cage and spoil his return to action this weekend, the 24-year-old Dane will enter the thick of the fray in the competitive featherweight division. Bolstered by earning his first UFC victory and fighting closer to home this time around, don’t be surprised if Burnell turns in his best effort to date against Allen on Sunday.

While Till is the most high profile Liverpudlian set to step into the cage on Sunday, expect the volume inside the Echo Arena to climb considerably when McCann begins to make her walk to the Octagon for the first time.

The flyweight newcomer emerged as a fan favorite during her three-fight run under the Cage Warriors banner, which culminated in a second-round knockout win over Bryony Tyrell that earned her the company’s flyweight belt and led to McCann being called to compete on the biggest stage in the sport in her own backyard this weekend.

After falling from the ranks of the unbeaten in her second pro fight, “Meatball” has amassed a six-fight winning streak heading into her promotional debut opposite Gillian Robertson that includes her title win over Tyrell and a unanimous decision victory over veteran Lacey Shuckman as well.

Robertson, a member of the cast on Season 26 of The Ultimate Fighter, impressed in her first foray into the Octagon late last year, locking up a first-round submission win over Emily Whitmire. If McCann can roll into the Octagon and maintain her current form by turning back the tough Canadian, the 27-year-old will have a chance to make a rapid ascent up the flyweight rankings.

Mazany’s first two appearances inside the UFC cage didn’t play out the way she would have liked.

First, she came up short in her bid to make the cast on Season 18 of The Ultimate Fighter when she ran into eventual winner Julianna Pena in the elimination round. Following a win on the regional circuit, Mazany stepped in for Liz Carmouche on two weeks’ notice to face Sara McMann, falling to the former title challenger in Halifax, Nova Scotia.

But her willingness to jump in against McMann earned her another opportunity to compete in the Octagon later that year and Mazany made the most of it, venturing to Shanghai, China to collect a unanimous decision victory over Yanan Wu to get back into the win column and push her record to 5-1 overall.

Mazany’s international adventure in the Octagon continues Sunday in Liverpool, where she squares off with Lina Lansberg, a durable and dangerous veteran who had won six straight before debuting in the UFC opposite Cris Cyborg.

Bolstered by her strong showing in China and clearly comfortable fighting “on the road,” this is an opportunity for Mazany to start building a little momentum in the bantamweight ranks by stringing together a couple victories and working her way up the divisional ladder.