On the Rise: Kansas City Edition

From a sophomore appearance more than two decades in the making to a freshman showing in a city that has become the de facto home for Invicta FC, the UFC ventures from Buffalo, New York to Kansas City, Missouri this week, arriving in “The Show Me State” for a star-studded UFC on FOX engagement headlined by flyweight champion Demetrious Johnson defending his title against surging challenger Wilson Reis.

This is one of the more impressive collections of fights assembled by the UFC matchmakers this year and not only boasts a potentially historic headlining act, but also a pair of pivotal clashes between contenders in divisions that are brimming with talent.

As always, this week’s show also offers an opportunity for fight fans to get familiar with a collection of less established names who could one day emerge as main card staples or perhaps more, depending on how things shake out.

Here’s a look at the athletes to keep tabs on competing this weekend.

This is On the Rise: Kansas City Edition. 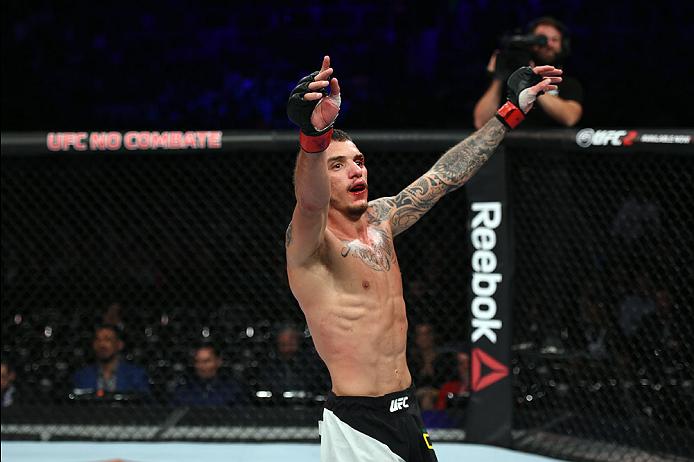 Injuries and the long stretches of inactivity that come with being hurt have limited Moicano to just a pair of appearances in the Octagon over the last two and a half years. He’s won them both, but in a featherweight division filled with familiar names and featuring non-stop drama at the top, it’s easy to understand how the 27-year-old Brazilian has slipped under the radar heading into this weekend.

Saturday has the potential to be his coming out party, however, as the 10-0-1 Moicano shares the Octagon with Jeremy Stephens in the opening bout of the four-fight main card on “Big FOX.” Stepping in against a human powder keg like Stephens usually translates into an explosive affair and if the Brasilia native can keep his winning streak intact, he could go from unknown to inside the Top 15 by the time the rankings update early next week.

Stephens is one of the most experienced members of the featherweight class and a notoriously tough out who has only been stopped three times in 38 professional appearances. Should Moicano hand him a second straight loss while pushing his unbeaten streak to a dozen, he’ll graduate from this series and into the conversation of young talents poised to potentially break through as contenders in the second half of 2017.

I can’t tell you the last UFC debut I was this excited for and that’s saying something because I’m easily excitable.

Duquesnoy is arguably the best prospect in the entire sport – not the UFC; the whole damn sport – and after earning double gold under the BAMMA banner, the 23-year-old French bantamweight is finally stepping into the Octagon for the first time this weekend, facing off against Arizona State wrestling alum Patrick Williams in a bout that is being broadcast on the televised portion of the prelims.

“FireKid” has legitimate championship potential, boasting a well-rounded skill set, strong fundamentals and an impeccable resume coming out of the regional circuit, where his lone setback came against current featherweight prospect Makwan Amirkhani. If he continues to advance and develop the way he has in the last couple years, Duquesnoy could be a contender as quickly as next year.

One of the most complete fighters to emerge from The Ultimate Fighter in recent years, the Season 23 light heavyweight winner from Team Claudia followed up his dominant performance against Khalil Rountree Jr. with a similar showing against 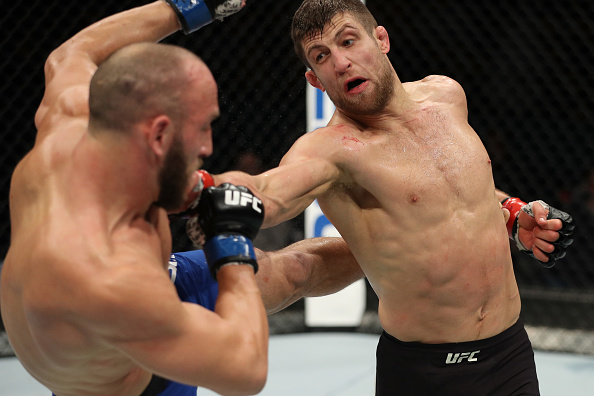 A standout grappler, Sanchez excels by playing to his strengths and not trying to do too much. While some may want to consider that boring and lament his clinch and wrestling-heavy approach, it has produced a string of victories to carry him to the fringes of the Top 15 in the UFC middleweight division just one fight after coming out of the TUF house, and could make him a handful for some of the more established names in the lower third of the rankings in the months ahead.

Before he gets there, Sanchez has to contend with Anthony “Lionheart” Smith, a 28-year-old finisher who has only been to the scorecards four times in 38 fights. Should he push his winning streak to six, “El Dirte” could find himself battling for a spot in the Top 15 next time out.