On the Rise: Japan Edition

For the fifth time overall and the first time in two years, the UFC Octagon returns to the famed Saitama Super Arena for UFC Fight Night: Saint Preux vs. Okami.

While the Friday night fight card features a handful of established names looking to move up the rankings in their respective divisions, the most intriguing element of this event are the collection of newcomers angling to turn their first appearance under the UFC banner into a breakthrough moment.

Here’s a look at the talented trio.

This is On the Rise: Japan Edition.

Saki may be a neophyte on the biggest stage in mixed martial arts, but the 33-year-old spent the last 15-plus years wrecking shop as one of the most popular and dangerous kickboxers in the world.

A champion under both the K-1 and Glory banners, Saki posted an incredible 83-12, 1 NC record and has shared the ring with a who’s who of kickboxing luminaries, including Tyrone Spong, Rico Verhoeven, Badr Hari and Daniel Ghita. Though he lost his only previous appearance competing under mixed martial arts rules, that bout took place more than a decade ago, and when it was announced that Saki had signed with the UFC, everyone rightfully got excited to see what the feared striker could bring to light heavyweight division.

For his first foray into the Octagon, “The Rebel” squares off with Henrique da Silva, the 28-year-old Brazilian “Frankenstein” who debuted with a pair of second-round stoppages wins before incurring three losses against a trio of 205-pound upstarts.

This will be an instant opportunity to figure out where Saki fits in the division and if the excitement surrounding his debut is warranted. With the light heavyweight ranks currently in a state of upheaval, an impressive opening salvo from Saki could fast track the established star, while a loss would knock the hype train surrounding the kickboxing crossover off its tracks. 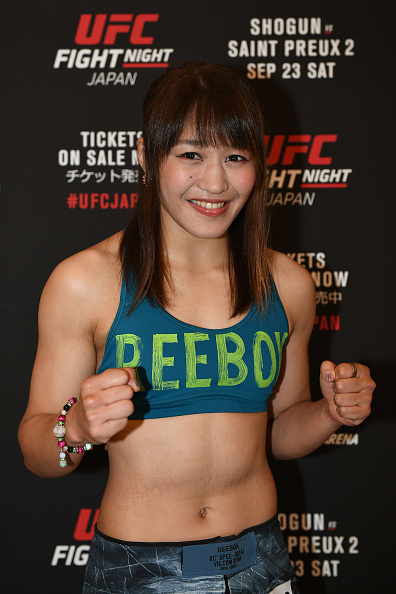 Much like Saki, Kondo enters her Octagon debut with an established reputation crafted outside the world of mixed martial arts, though the 28-year-old Japanese newcomer has also amassed a perfect 5-0 mark since beginning her MMA career in April 2016.

A world champion in organizations around the world, Kondo first built herself into a superstar as a professional wrestler. Trained by former ECW standout Tajiri, she made the transition to kickboxing in 2009, earning 13 victories against one defeat before decided to add mixed martial arts to her arsenal, debuting at Pancrase 277 with a unanimous decision win. Four more victories followed in the next 12 months, pushing her record to 5-0 and earning Kondo the call to step into the Octagon this weekend.

The Japanese star will face an equally hungry competitor on Friday when she squares off with 20-year-old Chanmi Jeon. The South Korean crossed the threshold into the Octagon for the first time earlier this summer, dropping a unanimous decision to JJ Aldrich in Auckland, New Zealand. Already 0-1 in the UFC, you can be sure Jeon will be bent on playing spoiler in this one.

While Saki and Syuri enter the Octagon for the first time with established reputations from other areas, Abe gets the chance to make an instant splash in one of the organization’s deepest, most competitive divisions right out of the gate.

The unbeaten welterweight squares off with Hyun Gyu Lim in the opening bout of Saturday’s fight card, looking to build on his 5-0 record with a victory over “The Ace.” Lim has split his first six appearances under the UFC banner and has dropped three of his last four, but a closer examination of those matchups shows he’s faced a trio of talented welterweights in Tarec Saffiedine, Neil Magny and Mike Perry.

Abe extended his winning streak to five back in July with an early second-round knockout win over Japanese veteran and former WEC title challenger Hiromitsu Miura, who paired with Carlos Condit for a forgotten classic all the way back at WEC 35. Lim has proven himself to be a tough out in the 170-pound ranks and if Abe can roll into the Octagon and push his record to 6-0 with a victory on Saturday night, he’ll establish himself as someone to watch in the welterweight division going forward.