On the Rise: Hamburg Edition

July is one of those months where there are no weekends off, so following a fun night of fights in Boise, Idaho, the Octagon is making a transatlantic journey and settling down in Hamburg, Germany for UFC Fight Night: Shogun vs. Smith this weekend at Barclaycard Arena.

The sixth UFC event to be held in Germany and second to take place in Hamburg, Sunday’s 13-fight lineup is capped by a pair of contests in the light heavyweight division, both of which underwent last-minute changes, but remain compelling contests, as former champion Mauricio “Shogun” Rua looks to extend his winning streak to four against Anthony Smith, while veteran contender Glover Teixeira squares off with former TUF winner Corey “Overtime” Anderson in the co-main event.

In addition to the familiar faces closing out the show, Sunday’s return to Hamburg also offers up an opportunity to see a handful of talented newcomers in action for the first time, including a pair of featherweight neophytes who face off against one another on the preliminary portion of the card.

Here’s a closer look at that trio of first-timers.

This is On the Rise: Hamburg Edition.

A 32-year-old newcomer with a 13-1-1, 1NC record, Azaitar was initially expected to make his promotional debut last September in Rotterdam, Netherlands opposite Siyar Bahadurzada, but an injury forced the Moroccan-German middleweight off the card. Now 10 months removed from that event, the surging “Gladiator” is ready to step into the Octagon for the first time against Brazilian veteran Vitor Miranda this weekend.

Azaitar has had a cup of coffee in several prominent secondary promotions, collecting victories in KSW, Cage Warriors, ACB and World Series of Fighting during his current nine-fight unbeaten streak, which includes a first-round knockout win over current UFC fighter Jack Marshman. Because of the injury that kept him from debuting last fall, he hasn’t fought since October 2016, but with a home game for his UFC debut, you can be sure he’ll be fired up and ready to go this weekend.

Miranda is a solid opening assignment for Azaitar, a durable, experienced talent who has gone 3-3 in the Octagon and brandishes legitimate fight-changing power. Though he’s dropped his last two appearances, the 40-year-old veteran earned three straight stoppages before that and has the skill and savvy to spoil Azaitar’s debut.

This is a tough test right out of the chute for Azaitar, but with the division currently in a state of flux, it’s an opportunity to make a statement in front of a partisan crowd and set himself up for bigger and better next time out. 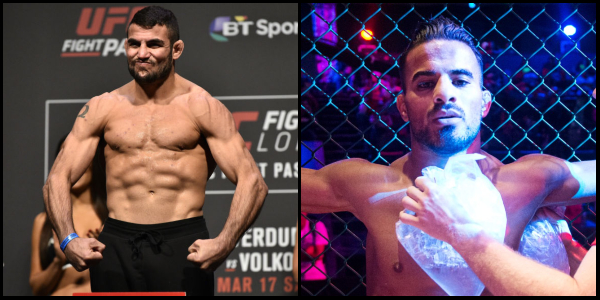 Newcomers to the featherweight division meet on Sunday’s preliminary card as the 31-year-old Bristol native Narimani takes on the Dortmund man Taha in what promises to be an entertaining affair.

Narimani was scheduled to make his UFC debut earlier this year when the organization ventured to London in March, but his bout with Nasrat Haqparast was pulled from the card at the 11th hour when Haqparast was diagnosed with an eye infection and declared unable to compete. After a brief delay, the former Cage Warriors featherweight champion returns this weekend, fighting on the same card as Haqparast, but squaring off with Taha instead.

Riding a three-fight winning streak that includes a pair of stoppages and dethroning Paddy Pimblett from the CW featherweight throne, Narimani is a seasoned veteran equally capable of ending your night standing up or on the ground.

On the other side of the cage, Taha is a hulking youngster who has competed in three divisions thus far during his 13-fight career, going 1-for-1 at lightweight, 8-1 at bantamweight and 3-0 at featherweight, including a second-round submission win last time out following the first loss of his professional career.

The 25-year-old has yet to face an opponent as polished and professional as Narimani, but bolstered by a supportive crowd and the excitement that comes with stepping into the Octagon for the first time, don’t be surprised if fans in attendance and those watching at home see the best version of Taha yet on Sunday.