On the Rise: Halifax Edition

For the first time in more than two years and just the second time overall, the Octagon is headed to Atlantic Canada this weekend, as UFC Fight Night: Lewis vs. Browne lands at Scotiabank Centre in Halifax, Nova Scotia.

The first time the organization traveled beyond Quebec and out to the Maritimes resulted in an entertaining fight card that introduced a number of new hopefuls to a wider audience. Pedro Munhoz and Albert Tumenov started things off quickly, Chris Kelades won his debut and Paul Felder collected his first UFC victory, while Canadian upstarts Olivier Aubin-Mercier, Nordine Talib and Elias Theodorou all earned wins.

Three names from that collection – Felder, Talib and Theodorou – are back in action Sunday, joined by another group of promising fighters hoping to use this event in Halifax as a launching pad to bigger and better things going forward.

Here they are in the latest edition of On the Rise. 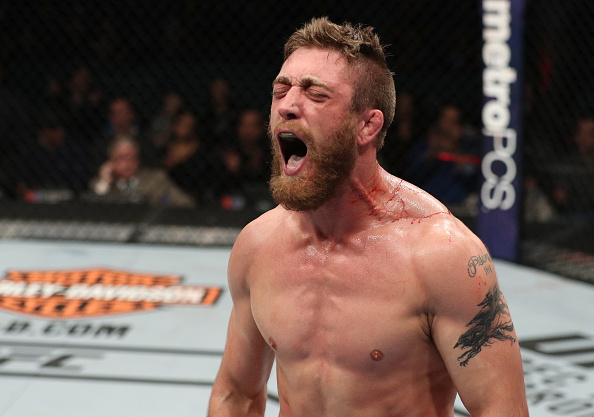 Gerald Meerschaert celebrates after his submission victory over Joe Gigliotti in their middleweight bout during the UFC Fight Night event at the Times Union Center on December 9, 2016 in Albany, New York. (Photo by Patrick Smith/Zuffa LLC/Zuffa LLC via Getty Images)" align="center" />

After putting together a 9-1 run where his lone setback was a decision loss to Sam Alvey, Meerschaert got a short-notice call to the cage in December and made the most of it. Stepping in against Joe Gigliotti in Albany, the Roufusport product laced up an anaconda choke and earned a first-round submission win, putting himself on the radar in the middleweight division.

Then he cut a glorious post-fight promo, announcing, “My name is GM3 and I’m here to f**k up the whole middleweight division!’ instantly putting a target on his back and making him a key newcomer to watch in 2017.

Meerschaert returns to action Sunday in a battle of middleweight sophomores, taking on Newfoundland-raised, Victoria-based Ryan Janes in a bout that has intriguing potential. Both are outstanding on the ground and tough as nails overall, which means no matter where this one goes, it should be entertaining.

And if “GM3” can keep making headway on his stated plan, he could find himself sharing the cage with some of the more established names in the 185-pound ranks later this year.

Fans are obviously going to be familiar the last name of the debuting bantamweight and those who remember coaches will recognize the younger brother of Tristar head coach Firas Zahabi for his numerous appearances in the corner of fighters from the Montreal-based gym, but this weekend, Aiemann Zahabi will finally step into the Octagon and compete.

A pro since late 2012, Zahabi has taken a patient approach to his professional career – in part because finding fights on the Canadian regional circuit is always tough and made more complicated by having a famous last name, but also because he’s wanted to continually work on his craft to ensure his arrival on the biggest stage in the sport doesn’t result in a 1-3 run and a return to fighting on smaller shows across his home country.

Brandishing a perfect 6-0 record with six first-round finishes, Zahabi is a technical fighter with a very good ground game and steadily improving standup. Having been around the UFC and world-class competitors for a number of years, the 29-year-old shouldn’t have the same jitters most neophytes encounter when he steps into the cage with TUF Brazil winner Reginaldo Vieira on Sunday evening.
RELATED: Matchups - Meerschaert vs Janes | Zahabi vs Vieira | Tucker vs Sicilia

One of the top talents on the East Coast of Canada for a number of years, Tucker was unable to compete the last time the Octagon blew into Halifax because of an injury, but he gets his chance this time around in what should be an all-action matchup with brawler Sam Sicilia.

The undefeated Newfoundlander, who trains at Titans MMA in Halifax, has earned eight straight stoppages after starting his career with a decision win six years ago. Stepping in with the TUF 15 alum Sicilia marks a significant step up in competition, but the 30-year-old East Coaster should be more than up to the task, especially given that he’s fighting at home and will be buoyed by the boisterous crowd that is sure to pack Scotiabank Centre to the gills from the outset.

The MMA equivalent of a gym rat, Tucker is constantly working on new techniques and keeping in fighting shape so that whenever opportunity knocks, he’s ready to answer the door. Or in this case, his phone at 2:30 in the morning, which is when the call he’d been hoping for came through.