On the Rise: Glasgow Edition

Coming off last week’s Friday-Saturday doubleheader in Las Vegas, the Octagon traverses the Atlantic and arrives in Glasgow, Scotland for the second time, where a card filled with hopefuls looking to make an impression will compete before a packed house at the SSE Hydro.

Capped by a welterweight clash between Gunnar Nelson and Santiago Ponzinibbio, with hometown favorite Joanne Calderwood squaring off with surging upstart (and OTR alum) Cynthia Calvillo in the penultimate pairing, Sunday’s show carries some battles with immediate divisional significance, but it’s largely a chance to get a first, second or third read on a handful of up and comers.

Here’s a look at three competitors to keep an eye on this weekend in Scotland.

This is On the Rise: Glasgow Edition. 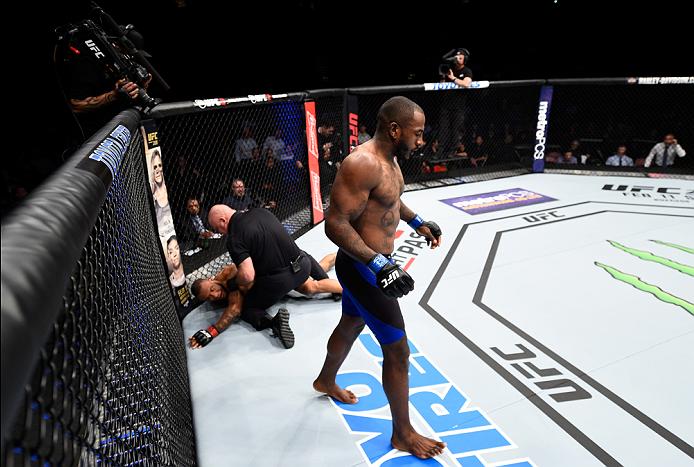 An unbeaten amateur run and four straight victories to begin his pro career made Rountree one of the most hyped prospects in the sport heading into his time on Season 23 of The Ultimate Fighter. Though he ultimately advanced to the finals, the Syndicate MMA staple was handled by Andrew Sanchez and handed his first defeat and then got tapped out by Tyson Pedro in his sophomore appearance in the UFC cage.

In the span of a year, he went from undefeated and pegged for big things to having his back against the wall after back-to-back losses.

But Rountree remains someone to watch in the light heavyweight division and a work in progress with obvious upside, some of which he showed in February when he walked into the Octagon and rolled through Daniel Jolly in 52 seconds to collect his first UFC win. The 27-year-old Las Vegas resident has destructive power, a demonstrated mean streak (in the cage) and good finishing instincts, and as he continues to gain experience, Rountree has the potential to develop into a dangerous member of the 205-pound ranks.

“Big Pretty” finally gets the chance to make his UFC debut this coming weekend when he squares off with fellow neophyte James Mulheron.

The 29-year-old trains alongside a host of standout talents at AKA in San Jose and has far more speed and athleticism than you might expect from someone of his stature, using the physical gifts that allowed him to play college football to make the transition into mixed martial arts.

After suffering a loss in his professional debut, Willis has rattled off four straight victories, the most recent of those being a second-round technical knockout win a little over a year ago. Now he’s poised to enter the Octagon for the first time and with the heavyweight division always in need of new names and fresh talent, a strong debut showing, coupled with his athletic pedigree, could land Willis a place in the fast lane to the Top 15 going forward.

A late addition to this weekend’s fight card, Sweden’s Teymur joins his brother David on the UFC roster and faces off with fellow newcomer Danny Henry in Sunday’s opening contest.

Fighting out of the Allstars Training Center in Stockholm and sporting a perfect 6-0 record, Teymur is an intriguing new addition who should garner more attention heading into his promotional debut as a result of his baby brother’s current run of success inside the Octagon. Fair or not, with David going 3-0 to begin his UFC tenure and coming off a Fight of the Night win over Lando Vannata at UFC 209, the bar will be set a little higher for Daniel as he steps into the UFC cage for the first time.

The 29-year-old has a strong Muay Thai base and good power while exhibiting the same willingness to tuck his chin and trade shots, confident he’ll get the better of his opponent, that has garnered the younger of the fighting Teymur boys instant affection from the hardcore set. Serving as the opening bout of the evening, don’t be surprised if Teymur hits the cage keen on starting things off with a bang this weekend in Scotland.