On the Rise: Gdansk Edition

After debuting in Poland with an event in Krakow two years ago, the UFC is returning to the European nation with a passion for combat sports for the second time with a 12-fight card featuring a collection of compelling matchups and intriguing new arrivals.

That initial event featured impressive debut wins for Stevie Ray, Aleksandra Albu and Maryna Moroz, as well as the first UFC victory for surging welterweight Leon “Rocky” Edwards, and this weekend’s show has the potential to serve as a similar jumping off point for several of the competitors set to step inside the Octagon on Saturday.

Here’s a closer look at three of them.

This is On the Rise: Gdansk Edition. 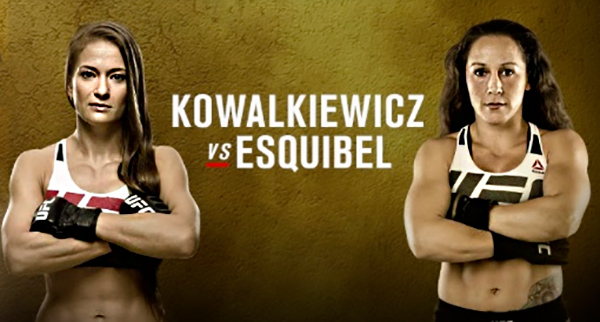 A long-time member of the Jackson-Wink team in Albuquerque, New Mexico, Esquibel was one of the more established names to audition for Season 23 of The Ultimate Fighter, but the Invicta FC veteran came out on the wrong side of a controversial split decision in the qualifying round and never made it into the house.

Esquibel has since split a pair of appearances, dropping a unanimous decision to strawweight prospect Alexa Grasso before rebounding with a victory over current TUF hopeful DeAnna Bennett and now the 31-year-old gets a chance to make an instant impact in her UFC debut by taking on former title challenger and perennial contender Karolina Kowalkiewicz.

The hallmark of Esquibel’s game is her grit and toughness, as the born-and-raised Albuquerque native’s fighting style is representative of the harsh, rugged terrain where it was forged. She’s not one to take a backwards step and has the kind of unrelenting forward pressure that can shake opponents who expect her to wilt. If she can get in Kowalkiewicz’ face and suffocate her with tireless offense along the cage, the UFC newcomer could turn her debut showing in the Octagon as an opportunity to announce herself as a tenacious, talented new addition to the 115-pound ranks.

Unbeaten through his first 10 appearances and riding a six-fight winning streak, Piechota gets to make his UFC debut at home in Gdansk in a matchup against Californian Jonathan Wilson this weekend.

Despite being a pro for nearly seven years, the 27-year-old middleweight is still in the developmental stages, as he went nearly two full years between fights a couple years back, but the layoff did nothing to slow his momentum or lessen his standing as a prospect to watch in the 185-pound weight class.

Piechota has a strong grappling base and his striking is developing nicely, as evidenced by the consecutive opening minute victories he collected earlier this year. Boasting a 100 percent finishing rate and an abundance of upside, he is definitely someone to keep an eye on this weekend and beyond.

The third time is the charm for Wieczorek, as the hulking Polish heavyweight will finally take his first steps into the Octagon on Saturday against Anthony Hamilton after two attempts to pair him off with Dmitrii Smoliakov fell through.

Fighting out of Chorzow, the surging newcomer has rattled off six consecutive victories since dropping his sophomore outing to his countryman Marcin Tybura, who has climbed to No. 8 in the UFC heavyweight rankings and headlines opposite former champ Fabricio Werdum next month in Sydney, Australia.

Like Piechota, all eight of Wieczorek’s victories have come by way of stoppage, but unlike most heavyweights, the UFC neophyte has shown a greater tendency towards submissions to this point in his career.

Although he takes the fight on short notice, Hamilton will serve as a solid litmus test for Wieczorek as Saturday’s contest will mark his tenth appearance in the Octagon and he stands as the most experienced opponent the 8-1 Wieczorek has faced in recent years. If he can get through “Freight Train” this weekend, the Polish heavyweight would enter 2018 as an intriguing new addition to the wide-open division.