While the majority of the attention directed towards Sunday’s UFC Fight Night event at the Mandalay Bay Events Center in Las Vegas is focused on the top of the card, a triumvirate of intriguing talents competing earlier in the evening is hoping to make an impact with the audience this weekend.

Here’s a look at a trio of fighters on the rise at UFC Fight Night: Almeida vs. Garbrandt.

It’s a little difficult to attach the “prospect” tag to a 37-year-old fighter, but that doesn’t mean fight fans shouldn’t be paying close attention to Miranda as he steps into the cage this weekend against Chris Camozzi. The TUF: Brazil 3 heavyweight finalist is a perfect 3-0 since dropping two divisions to compete at middleweight, earning impressive stoppages in each of those contests.

The veteran Brazilian, whose bald dome makes his “Lex Luthor” nickname work quite well, has the kind of sudden power and finishing instincts that can change a fight on a dime, as witnessed in his post-TUF debut against Jake Collier. After spending a majority of the opening round on his back, Miranda got back to a standing base, fired off a head kick that staggered the UFC newcomer and brought the fight to a close one second before the round expired.

He’s subsequently added similar finishes over Clint Hester and Marcelo Guimaraes to run his winning streak to three. Camozzi represents a step up in competition – an experienced, resilient veteran with solid striking of his own – but if Miranda is able to continue his finishing ways, he’ll be in line for another move up the divisional ladder next time out. 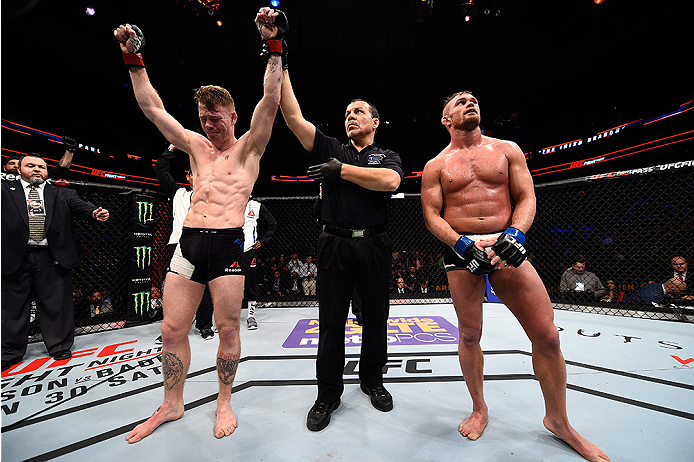 Standing in the center of the Octagon inside the TD Garden in January, Felder fought back tears as his hand was raised in victory and his name echoed through the arena. Just minutes earlier, the Philadelphia-based lightweight had caught Daron Cruickshank in a third-round rear naked choke and forced him to tap, getting the finish that not only ended his two-fight losing streak, but likely kept it from extending to three had the final 64 seconds of the round ticked off the clock.
RELATED CONTENT: Felder delivers when he needed it most in Boston | WATCH: Emotional after victory

It’s crazy to think that Felder might have been fighting for his place on the UFC roster in January, as just a year prior and coming off a blistering spinning back fist knockout win over Danny Castillo, the 32-year-old UArts grad was ticketed as “the next big thing” in the loaded lightweight division.

Narrow losses to Edson Barboza and Ross Pearson put him in a precarious position to start the year, but with a quality finish behind him, Felder gets the chance to push his winning streak to two against veteran Joshua Burkman on Sunday in what should be a Fight of the Night contender.

Any time a fighter under the age of 30 enters the UFC heavyweight division, it bears watching, and when you couple that with a seven-fight winning streak where each bout ended inside the distance, you definitely have to sit up and take notice. That’s what Milstead brings to the table in his UFC debut when he takes on Chris de la Rocha in the opener of Sunday night’s event in Las Vegas.
Matchup with Chris De La Rocha

The 28-year-old Pittsburgh product dropped his professional debut and hasn’t lost since, rattling off seven consecutive victories to get the call to the Octagon. A former D-III football player who aspired to a career on the gridiron, Milstead, like many others on the UFC roster, got a taste of MMA, fell in love and has been chasing this moment ever since.

With Stefan Struve and Ruslan Magomedov standing as the only fighters in the Top 15 under the age of 30, there is clearly a need for fresh, young talent in the division and an opportunity for a fighter like Milstead to make up some ground in the shallow heavyweight ranks in a hurry. If he’s able to keep his finishing streak alive in his UFC debut on Sunday, “The Prototype” could find himself getting an early chance to prove himself against some of the more established names in the division in the second half of 2016.