The Rise, Fall, and Rise of Brandon Vera 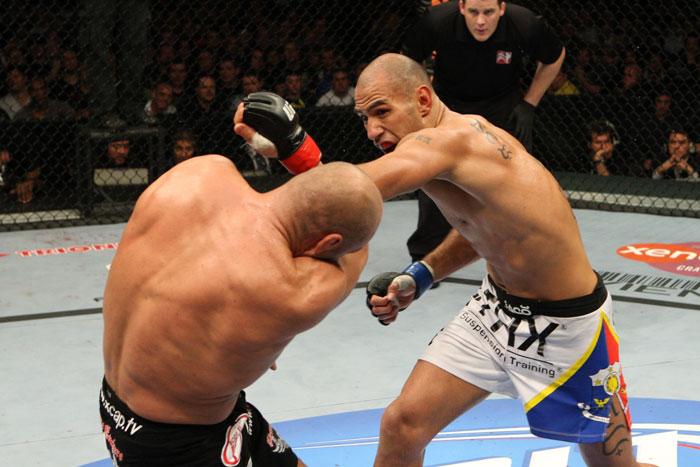 Brandon Vera heard the pleas from his cornermen over the roar of the Las Vegas crowd at the MGM Grand, but it really didn’t matter. He almost wanted to yell back, “I know I’m supposed to get up, but I can’t. This guy is strong as #$%$.”

That guy, Brazilian light heavyweight contender Thiago Silva, had pinned Vera to the canvas, leaving him no space to escape. It got so bad for “The Truth” that Silva began taunting him with slaps, even playing drums on his back for a spell. When it was over, not only had Vera lost the fight, but he was embarrassed, and was about to lose his job.

“It was weird, man,” he said. “After that fight I just felt confused. Nobody since the sixth grade had ever big brothered me, and that’s pretty much what Thiago did. Guys asked me what happened and I was like ‘man, I don’t know. He was #$%$ing strong.’ That’s the only thing I could think of.”

As it turned out, there was a reason for that, as Silva failed his post-fight drug test, revealing later that he used a urine adulterant to mask injections he took containing substances banned by the Nevada State Athletic Commission to reportedly help with a back injury. Silva’s unanimous decision win was changed to a no contest, and Vera was welcomed back into the UFC fold.

How’s that for a crazy turn of events?

“I don’t even think it set in,” said Vera of getting cut for the organization he had been competing in since 2005. “The only thing I can compare it to is a death in the family. It happened, but did it really? And I still wasn’t over the shock when they hired me back.”

Not surprisingly, Vera soured on Silva when the results of the failed test were revealed, but before that, the San Diegan didn’t hold any grudges.

“After the fight, I was still confused, and I saw him in the hotel, I gave him a hug and said ‘Good fight man.’ I can’t be mad, he just whupped my ass, so I gave him the respect. But when I found out (about the failed test), I was like, ‘what a piece of s**t.’”

You would assume that all’s well that ends well, but even after being reinstated, Vera was left with the memory of a fight in which he got taken down and dominated by a fighter known primarily as a striker, and there were still his previous two losses to Jon Jones and Randy Couture. So there were issues to be dealt with, and the 34-year old addressed them over the course of an 8,500 mile cross country road trip in which he taught seminars and got his mojo back.

“I can’t explain it,” he said. “Being fired and hired back and then driving around the US, 8500 miles, I think I got it back. I think everything settled back into place, and I’m where I need to be.”

Add in a trip to Lloyd Irvin’s gym back east to prepare for his UFC 137 bout against Eliot Marshall, work with the wrestling team at Old Dominion University, and the arrest of a man believed to be the mastermind of a 2008 home invasion involving Vera and Irvin, and the light heavyweight finally found some semblance of peace. It’s something he hadn’t experienced since before his 2008 loss against Keith Jardine, when the home invasion took place and when he was considered a serious title threat. And no one considered Vera more of a title threat than the man himself.

“My ego got in the way,” he explained. “It started getting in the way of me becoming a complete MMA fighter. I stopped going to Master Lloyd’s, and there were a lot of little mental things too. Things started changing from the Jardine fight on and I didn’t go back to train at Master Lloyd’s since the Jardine fight. I had a couple life-changing events happen right before the Jardine fight and during the fight and I honestly believe that MMA fell off the list. It wasn’t number one on my list anymore. It became number three in my life. I’m always down to knock somebody out or go punch somebody, but I wasn’t pushing myself extra. I would go to practice and I’d be looking at the time – oh God, how many more rounds we got? And now, I’m there until coach says ‘time.’ Now, I feel like I did when I first came in the sport, and I realize that I have a lot to learn and I’m open to learning again. I’m back in school and back on the grind.”

It’s almost like a husband being with his wife for years and years and starting to forget the little things. So when she walks away one day and the husband wonders why, it’s because this new guy brings flowers and treats her the way the husband once did. Vera started neglecting his sport, and it left him in the dust.

“I would agree one hundred percent,” he said. “There’s no other excuse, nothing else I can say that fit besides it fell back to number three, and I just took it for granted. Between the guys getting caught for the home invasion, me driving 8,500 miles across the US, a lot of time to think, and teaching seminars and being fired and rehired back by the UFC, that’s a lot of groundbreaking stuff for one person.”

But now he’s back to business, settled in, and ready for what has to be a must win bout against Marshall. In the process of the last few months, he’s also gotten away from the comforts of home and of his home gym, the Alliance Training Center, and revisited his roots, both literally and figuratively, as his trip back east has also prompted him to get back to the ground game he has neglected over the years.

“I’ve got my wrestling back in order,” said Vera, 11-5, 1 NC. “When I first started fighting, my wrestling was so good that I could stand up with people because you could never take me down, or if you did, I got right back up. I got to the point in my career where I just wanted to stand up and wanted to force everybody to stand up with me, and for a little while everybody did want to find out if they could stand with me. Now, nobody wants to find out anymore.”

So he’s had to adjust his game to adapt to the new MMA landscape. What he hasn’t adjusted are his expectations – he’s still shooting to be the best 205-pound fighter on the planet.

“This is what I was doing when I was kicking everybody’s ass and talking s**t, and this is where I’m at now,” said Vera. “My mouth is running again and I’m back out in the world doing my thing and doing what I should have been doing since Day One. I don’t know why MMA took a backseat to whatever else it did in my life, but it’s not anymore. I understand that this is what I’m supposed to be doing with my life, and there’s no way I could be flipping burgers or selling cars or doing anything else. I’m supposed to be fighting; I’m supposed to have that damn title around my waist, and every time I watch (UFC light heavyweight champion Jon) Jones fight, it’s good motivation to watch him kick somebody’s ass or do his thing in the ring. It’s really good motivation. It makes me so hungry.”

He’ll need that hunger this Saturday night if he wants to keep his UFC dreams alive, and he has no intention of ever leaving again.

“Everybody’s seen me at my highs, they’ve seen me at my lows, and everybody wants to see the story continue, and I’m not ready for it to be done yet,” said Vera. “It’s been a rough ride, peaks and valleys, but I told everybody, don’t blink and don’t stop believing, because I’m here.”