The Rise of Derrick Lewis 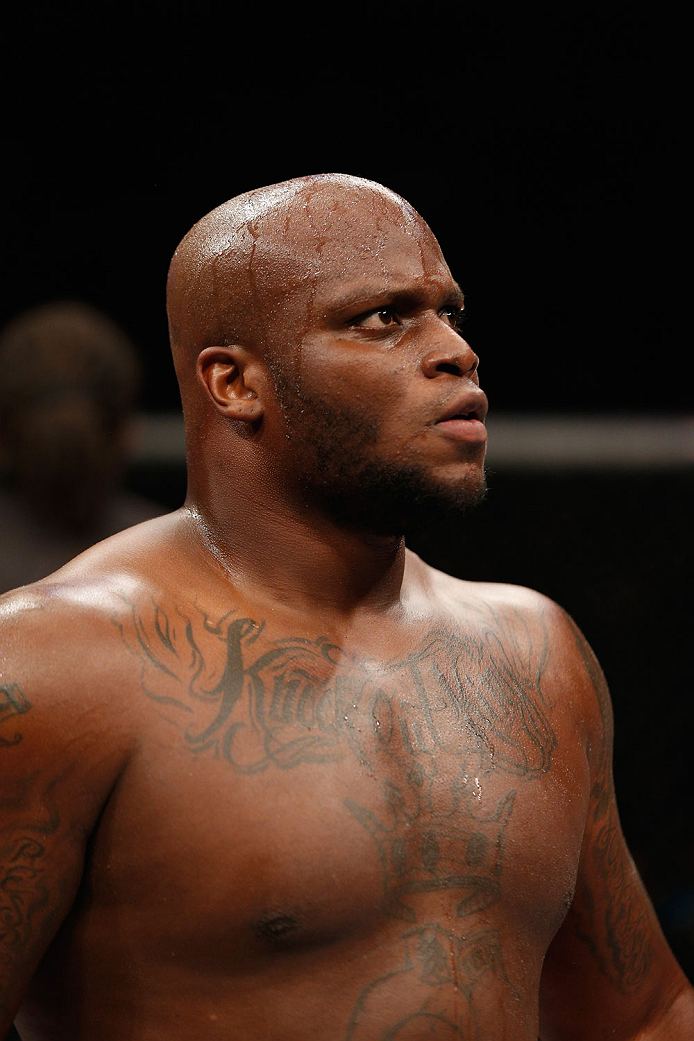 Tip of the iceberg.

But that is the world we live in. And, it’s one “The Black Beast” aims to change in his Friday clash with fellow knockout artist Matt Mitrione at UFC Fight Night: Souza vs. Mousasi.

In April and July of this year, the 29-year-old heavyweight quickly dispatched opponents with jackhammer-like ground-and-pound only minutes into their opening stanzas. In both bouts, Lewis showed only glimpses of his stand-up abilities, which he has been diligently working on and was what fell many of his pre-UFC foes.

“I have a lot more to show, especially in the stand-up game,” Lewis affirms. “I feel like the whole year layoff I was practicing on my stand-up. I feel good about it because everyone hasn’t seen it yet. Hopefully in this fight you’ll get to see a lot more of my stand-up.”

Heading into his Octagon debut, Lewis was experiencing a 13-month layoff, which is by far the longest expanse of time between fights in his young career. He admitted in the post-fight interview he felt the famed “UFC jitters” most rookies get their first time in the Octagon. Further, Lewis said the most surreal part was hearing the Voice of the Octagon, Bruce Buffer, yell his name. Nevertheless, he TKOed newcomer Jack May on the ground in a fast-paced, surprisingly grappling-heavy contest.

“It was just the jitters,” Lewis said. “I couldn’t control myself. I believe it was because I had a year layoff since my last fight. I was scheduled to fight in August of last year to make my debut until I got injured. I was fighting just about every other month and then I hadn’t fought for a whole year. The thing about it, I was fighting for the first time in the UFC and it was my first fight back after sitting out a whole year. I think in the second fight I felt more comfortable in there, more like myself. I just felt like a totally different fighter and I could pick how the fight would go the way I wanted it to go.”

Against Guto Inocente at The Ultimate Fighter 19 Finale, Lewis enjoyed a calmer paced bout, which ended in a similar fashion to the bout with May: punches on the ground. The New Orleans native did sneak in a teaser of his athleticism on the feet when the big man threw a roundhouse kick followed by a wheel kick. Not many 260+ pound heavies are dolling out combination head kick attempts moments into a bout.

Although the fight’s end came via three piston-like punches, the huge punch he whiffed on is what will be seared into Inocente’s and future opponent’s nightmares. “I always re-watch my fights like a hundred times to see what I could have done better and I’ve seen his face, his reaction to that punch,” Lewis said of the windmilled fist thrown at Inocente’s head, where it looks like Inocente thanks the Heavens above when it missed.

It shouldn’t come as a surprise to anyone that a guy as big as Lewis is and who owns a nickname like The Black Beast would hit with a lot of power, but 10 out of 11 wins via KO is mighty impressive. On top of that, Lewis’ finishes appear in rounds one, two and three, meaning he’s dangerous at all points in a fight and his two career losses come via decision, meaning Lewis doesn’t quit.

Easily, Lewis’ biggest win and the fight that speaks the most about his potential is his August 2012 stoppage of previously undefeated Jared Rosholt. Outside of their scrap, Rosholt, a three-time NCAA Division 1 All-American wrestler, is 11-0, including three straight wins inside the Octagon. But Lewis faced and bested a highly-credentialed wrestler who no one else has yet to beat. In the second round, he finished Rosholt with a relentless pursuit of punches, throwing bombs until it was over.

“Every punch I throw, I’m really trying to knock my opponent out,” Lewis asserts. “I really don’t even like throwing jabs because I think jabs aren’t effective. So, every punch I’m throwing is really a knockout punch. I’m putting weight into every punch and every punch I throw I’m trying to knock their head off. It’s like a noise that guys make when they get knocked out like a ‘uuuuuuhhhh’. Like they’re trying to breathe and I know that’s when I just need to keep the pressure on them and keep hitting him.”

Up next, The Black Beast will travel to Connecticut to tangle with The Ultimate Fighter alum Mitrione. Coming off a first-round drubbing of Shawn Jordan that earned him a Performance of the Night bonus, Mitrione has fought his whole MMA career inside the Octagon, resulting in a 7-3 record including six knockouts. Mitrione was supposed to clash with Stefan Struve in July, but the bout fell through the day of the event. Either way, the former NFL football player’s striking looked picture-perfect in his latest outing in March.

“I don’t care about his reach,” Lewis discloses. “I just believe I have the bigger heart in this fight and I believe the bigger heart is going to win. My heart has won me a lot of fights that people have counted me out of and I’m going to go in there fighting the same way - believing that my heart is going to take me in there and get me that W. I believe he’ll be a tough opponent for me, but he won’t be the toughest opponent I have ever had. It’s going to be a good fight. I believe that basically he’s not my toughest opponent and I’ll just leave it like that. I don’t want to talk too much trash.”

On September 5th, two hard-hitting heavyweights will throw down as Lewis collides with Mitrione. “[The fans] probably really won’t even have to sit down because the fight might not even last that long,” Lewis, who is finding his groove inside the Octagon following two powerful wins, said. “I don’t want to be cliché and be like, ‘Oh, I’m in the best shape of my life, blah blah blah’, but I’m feeling really damn good. I’m just excited to see what I can do. I want the whole world to take notice of The Black Beast.”