On the Rise: Beijing Edition

Three fighters On the Rise for Saturday's Octagon action in Beijing
By E. Spencer Kyte • Nov. 19, 2018

Following a successful debut in Buenos Aires, Argentina capped by a triumphant homecoming for Santiago Ponzinibbio, the Octagon now travels to Beijing, China for the first time for an event capped by two critical heavyweight contests that kick off in the early morning hours on the east coast.

Headlined by a crucial rematch between surging contender Curtis Blaydes and the only man to beat him thus far, recent title challenger Francis Ngannou, this weekend’s debut at Cadillac Arena marks the second time the UFC has held an event in mainland China, following last November’s venture to Shanghai, where Kelvin Gastelum closed out the evening with a knockout win over Michael Bisping.

Just as that card featured a host of Chinese fighters and competitors from throughout the Asian and Pacific regions, so too does Saturday’s showcase in Beijing, but this time around, many of those athletes are returning to the Octagon, looking to build on strong performances rather than setting foot in the UFC cage for the first time.

But amongst the up-and-coming talent that bears watching is weekend is one newcomer — a promising new addition to the heavyweight ranks who has an opportunity to make an instant impact within the division by taking out a legendary figure right before the headlining tandem take to the cage.

Here is a closer look at that intriguing debutant and two more emerging names to pay close attention to on Saturday.

This is On the Rise: Beijing Edition.

Very seldom do promotional newcomers get the chance to step into the Octagon for the first time against a former title challenger and one of the most decorated and accomplished fighters in their division, but that is precisely the opportunity before Pavlovich this weekend as the UFC rookie squares off with Alistair Overeem in the penultimate contest on Saturday’s fight card.

Standing six-foot-three and sporting a perfect 12-0 record, Pavlovich is the most intriguing new arrival to the heavyweight ranks since Blaydes debuted against Ngannou two-and-a-half years ago in Zagreb, Croatia — a massive human being with a Greco-Roman wrestling base and consecutive victories over Kirill Sidelnikov and Mikhail Mokhnatkin under the Fight Nights Global banner.

Dispatching “Baby Fedor” and the talented 28-year-old Mokhnatkin (who has since rebounded with consecutive victories) to push his winning streak to an even dozen makes it clear that Pavlovich has talent, but now he’s being thrown into the deep end of the talent pool and it’s going to be sink or swim.

Overeem is one of the most experienced and dangerous fighters in the division — a challenging matchup for seasoned competitors, despite his recent struggles, and as daunting an entrance exam as one could face upon joining the UFC roster.

But with a massive challenge comes the possibility of a tremendous reward, as a victory over the Dutch superstar would hasten the Russian newcomer’s rise up the rankings, skipping him past the “collect some wins and work his way up the ladder” period and dropping him right into the thick of the chase in the congested heavyweight division.

Even if Pavolvich should incur his first professional loss, a strong showing against the 38-year-old contender would establish him as someone to pay close attention to heading into 2019, which makes this a “win-win” situation for the debuting heavyweight. 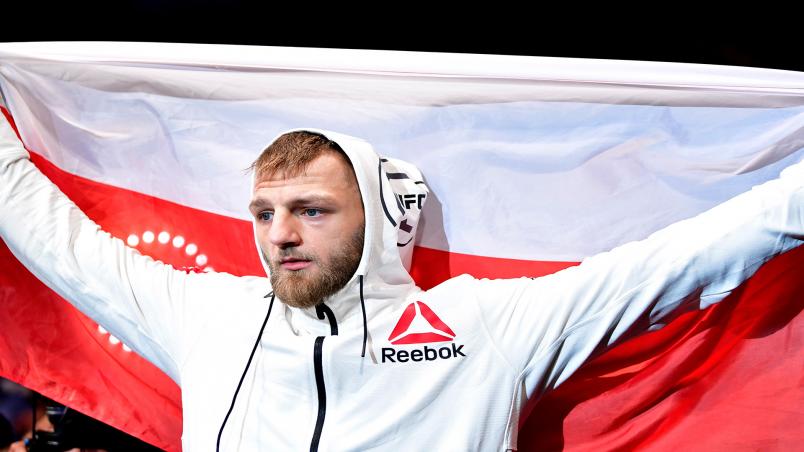 HAMBURG, GERMANY - JULY 22: David Zawada of Germany prepares to fight Danny Roberts of England in their welterweight bout during the UFC Fight Night at Barclaycard Arena on July 22, 2018 in Hamburg, Germany. (Photo by Jeff Bottari/Zuffa LLC/Zuffa LLC via

Germany’s Zawada made his promotional debut on short notice back in July, filling in for the injured Alan Jouban opposite Danny Roberts in a main card contest at the Barclaycard Arena in Hamburg. Though he came out on the wrong side of the results, the welterweight newcomer acquitted himself nicely given the circumstances.

Now, the man who carries the nickname “Sagat” after the famed Street Fighter Muay Thai stylist makes his second short-notice appearance, venturing to Beijing to square off with the most accomplished Chinese UFC fighter on the roster, Li Jingliang.

Filling in for the injured Elizeu Zaleski dos Santos, Zawada hopes to break into the win column by jumping into the Octagon opposite “The Leech” this weekend. Throughout his bout with Roberts in Hamburg, the 28-year-old welterweight showed toughness and talent, forcing his British foe to dig deep in order to pull out the victory. With a little more time to prepare this time around, Zawada has designs on reversing the results and handing Li his first loss on home soil in over six years.

Zawada was on a tidy five-fight winning steak that included a victory over former WEC competitor Maciej Jewtuszko prior to making his first foray into the Octagon during the summer. If he can build upon that strong showing and get back to the form that carried him to 16 victories in his first 19 professional appearances, the Dusseldorf native could return home with his first UFC victory in the books.

Quietly 2-0 in the UFC and riding a seven-fight winning streak overall that dates back to October 2010, Xiaonan is on the verge of establishing herself as a dark horse contender in the strawweight division.

After scoring a unanimous decision win over Kailin Curran in her promotional debut last November in Singapore, the streaking 29-year-old returned to the cage in June to post a lopsided win over Viviane Pereira. Throughout the contest, “Nine” kept the Brazilian at range, using her strong, powerful boxing to leave Pereira searching for answers and unable to get inside and land. It was an eye-opening performance for the Chinese strawweight and one that should have served notice to the rest of the division that she was someone to look out for in the future.

This weekend, Yan has the opportunity to push her winning streak to eight in a showdown with Japan’s Syuri Kondo, the former professional wrestler and shootboxer who began her UFC tenure with a victory over Chanmi Jeon, but suffered the first loss of her mixed martial arts career last time out against Poliana Botelho in May.

Extending her overall run of success and capturing a third consecutive win in the UFC will put Yan on the radar in the 115-pound ranks, sending her into 2019 on the precipice of breaking into the rankings and poised to take on some of the more established names in the division.