On the Rise: Austin Edition

The last time the UFC showed up in the land of the Longhorns, Franklin Barbecue and Austin City Limits, Frankie Edgar cemented his standing as the top featherweight contender in the division with one of his trademark “there are levels to this” performances against Cub Swanson, and a couple competitors that would blossom into established names stepped into the Octagon for the very first time.

That night in Austin back in November 2014 began with Dooho Choi settling Juan Puig in just 18 seconds and was followed up by a 20-year-old Paige VanZant breaking down into tears after collecting a third-round stoppage win over Kailin Curran in her promotional debut.

Three years and a couple months later, the UFC is headed back to the Frank Erwin Center for UFC Fight Night: Cowboy vs. Medeiros, a card laced with familiar names and boasting a couple newcomers with the potential to use this weekend’s event in Austin as a launch pad to bigger and better just like “The Korean Super Boy” and “12 Gauge” did the first time the Octagon arrived in the Texas capital.

This is On the Rise: Austin Edition.

Just a few weeks removed from picking up a second-round stoppage victory under the Legacy Fighting Alliance banner to push his winning streak to six, Millender has a chance to make an instant impact in the welterweight division in his debut assignment opposite Thiago Alves on the main card of Sunday’s event.

The 30-year-old Californian has good size for the division and has rebounded nicely from a rough patch that occurred when he got his first taste of facing tougher competition. Having regrouped and rebuilt a solid run of success, Millender is ready to test the waters in the UFC welterweight division and instead of wading into the shallow end, he’s diving head-first into the deep end.

After 12 years on the UFC roster, Alves is one of the most experienced fighters in the 170-pound ranks and a serious threat for anyone, let alone someone stepping into the Octagon for the first time.

Following a lengthy battle with injuries and a one-fight flirtation with competing at lightweight, the 34-year-old American Top Team veteran returned to welterweight and the win column with a tactical, professional effort against Patrick Cote last April at UFC 210. If Millender can stride into the UFC cage and add to his winning streak by getting the best of Alves, it will signal that the newcomer means business and is someone to keep tabs on this year. 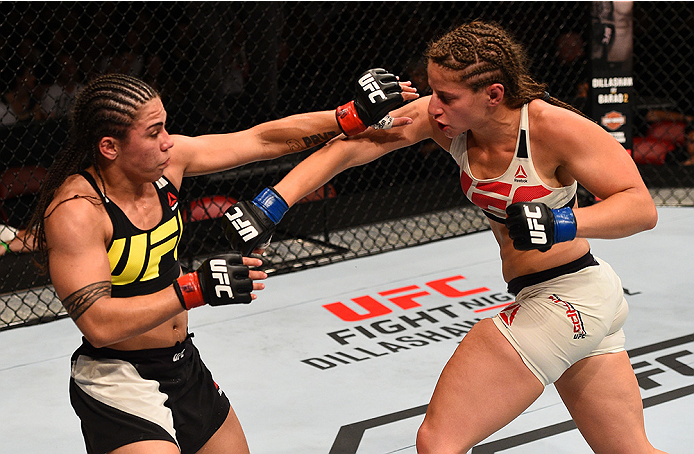 Part of the first female cast on Season 18 of The Ultimate Fighter, Moras’ career in the UFC has never really gotten rolling as injuries have unfortunately limited the Kelowna, British Columbia resident to just three Octagon appearances. The 29-year-old returned from a two-year absence to collect a first-round submission win over Ashlee Evans-Smith at UFC 215 in Edmonton back in the fall and now she’s ready to jump back into the fray this weekend against Lucie Pudilova.

The David Lea protege is a great grappler who is equally as comfortable fighting off her back as she is in top position, which always adds an extra wrinkle to the proceedings. Her finish of Evans-Smith came after the duo clinched along the fence and the Californian looked to press the action from top position. After standing up to reset, Evans-Smith dropped back into Moras’ guard, only to be swallowed up in an armbar attempt that the Canadian eventually completed.

Returning quickly after that performance, Moras looks to make it two in a row when she takes on Pudilova, a tough-as-nails 23-year-old from the Czech Republic who collected her first UFC win last time out against Ji Yeon Kim. Given her prowess on the canvas and the fact that the bantamweight division is wide open as fighters migrate to flyweight, Moras has the potential to make a run in the 135-pound ranks in 2018 if she’s able to earn another impressive win in Austin and maintain an active schedule throughout the year.

While Dana White’s Tuesday Night Contenders Series produced a number of interesting new additions to the roster and a handful of impressive finishes last summer, Neal might have delivered the best overall performance.

Jumping into the cage for the second time in 11 days and fighting up in weight, the 27-year-old Texan dropped Chase Waldon with left hand along the cage less than two minutes into their fight, forcing referee Jason Herzog to wave things off. Now back down in the welterweight division, “Handz of Steel” gets the opportunity to collect his first UFC victory in a matchup against Brian Camozzi in Austin.

Having the power, patience and precision to drop and stop Waldon at middleweight while making the quick turnaround is a real eye opener, and if Neal can carry those same traits with him into this weekend’s event, he has the chance to extend his winning streak to three and establish himself as an intriguing new addition to the welterweight ranks. While nowhere near the kind of high profile opportunity as Millender is getting by taking on Alves on the main card of Sunday’s show, a strong showing from Neal against the tough and durable Camozzi will not go unnoticed.