The Rise Of Anthony Smith

Recap Smith's Incredible UFC Journey And Preview What's Next For Lionheart In 2019
By Thomas Gerbasi • Jan. 11, 2019

The first month of 2018 was miserable for Anthony Smith. Sure, life at home was good and the rising middleweight star was on a three-fight winning streak and on his way to Brazil to try and make it four against Thiago Santos. But the Nebraskan had other issues to deal with, namely trying to get his six-foot-four frame down to 186 pounds again.

“I wanted to work my way up the rankings, but I wasn’t getting the matchups I needed,” said Smith, who was coming off a trio of wins over Elvis Mutapcic, Andrew Sanchez and Hector Lombard. “I was starting to feel like my time at 185 was probably coming to an end and I wanted to make a last little run at it. But I was struggling, and I struggled the whole camp to get my weight down and it was just a tough time. But that was the goal, to fight Thiago and work my way up the rankings.”

A win over Santos might have done the trick for the Nebraskan, who finally appeared to turn the tables on a rollercoaster career and was on some straight road. But his body was rebelling, and no one knew it better than his coach, Marc Montoya.

“Marc pulled me aside after the Sanchez fight and said, ‘Hey man, I think we really need to consider moving up. This isn’t healthy,’” recalled Smith. “And as many fights as Marc Montoya has been involved in and as many fighters as he has, he came to me and said that was the hardest weight cut he had ever seen. So it was already being talked about.”

“But we were on a winning streak and doing well.” 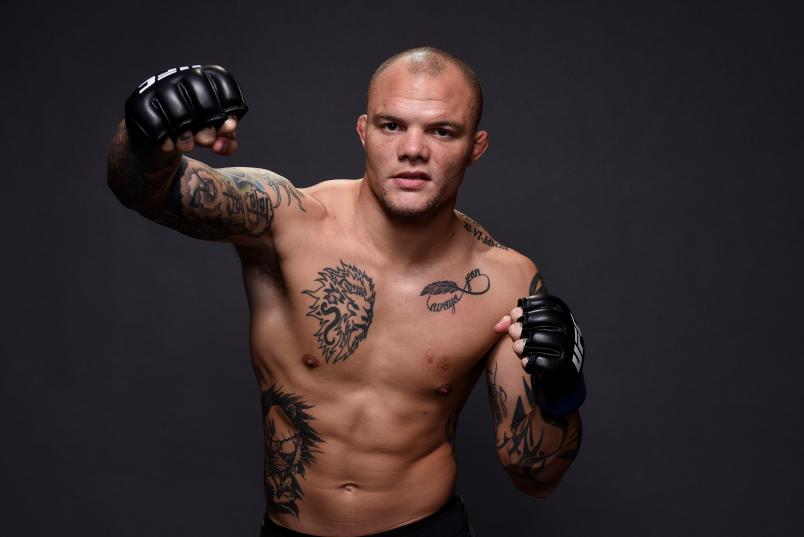 He lost to Nego in less than two minutes and was back to the regional scene. It would have been a crushing blow for most 24-year-olds, but Smith wasn’t the average 24-year-old. Not only had he already been competing professionally for over five years, but back home in Nebraska he had a life far removed from the prizefighting business. And it was his relationship with Mikhala that allowed him to keep his life in order.

Today, the couple has three children, and while everything has changed for him professionally, personally, she is still his rock.

“I was nothing when I met Mikhala,” said Smith. “I think I was 5-4 (as a pro), I was nothing. She didn’t even know what MMA was. She didn’t know anything about the sport, she didn’t know anything about fighting and she just enjoyed being with me and we enjoyed being with each other. So our relationship was never built off who I was as a fighter. She doesn’t care how popular I am. Obviously she wants me to win and she wants me to be successful and she’s along for the ride and has the same dream I do. But if it all goes away, she doesn’t care. She cares that I’m a good father and that I keep my promises to my kids and I don’t say things in the media that I’m gonna regret later on that our children are gonna read. That’s what she cares about. And she cares that I go in there and do the best that I can do and I don’t give up on myself.” 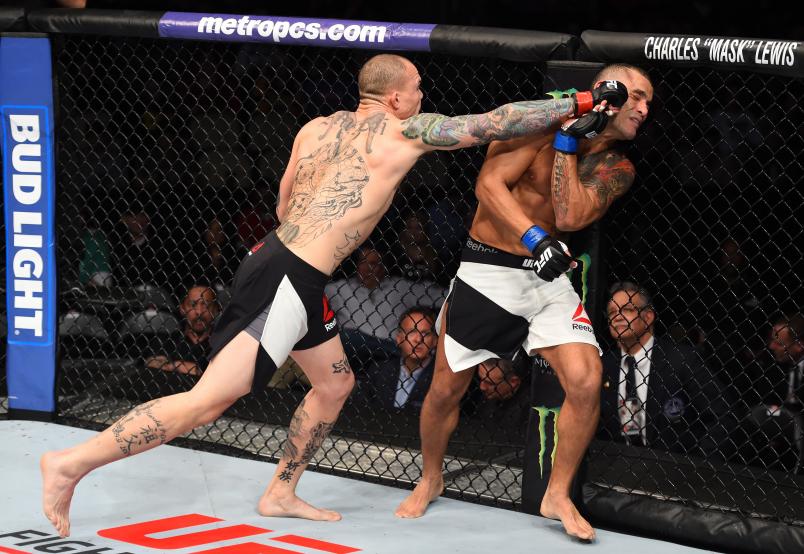 Smith knew it was going to be a long road back to the UFC, but he wasn’t about to give up. He would lose his first post-UFC bout to Josh Neer in December 2013, but over the next 25 months, the wins began to pile up. And after he avenged the loss to Neer via first-round knockout in January 2016 to extend his winning streak to seven, the UFC called with a short-notice matchup against Leonardo Leleco, he took it. And won.

He was a UFC fighter again, and he won three of his next four at 185 pounds. Then he lost to Santos. It was Fight of the Night last February, but now Smith was in a position he didn’t want to be in.

“That was a really, really hard one,” he said of the loss to Santos. “Times were tough, I got a family. I got the bonus, so that took a lot of that away. But I was at a crossroads. I didn’t want to feel like, ‘All right, I lost and now I’m just gonna run from it.’ But at the same time, I didn’t want to feel like I felt in that weight cut. That one was way worse than anyone I ever had. So I knew getting on that plane that I wasn’t going to see 185 pounds again, and I didn’t know what that meant as far as where I went from there. But I knew whatever direction I went, it wasn’t going to be back down to middleweight.”

I ask Anthony Smith what he ate when he got home from Belem, Brazil after the loss to Thiago Santos in February 2018.

“Everything,” Smith laughs. “That’s the problem. I’m a big meat eater. Lots of steak. I’m from Nebraska, so obviously steak and beer are usually my go-to.”

Smith can laugh about it now. He’s a top light heavyweight contender and a leading candidate to face champion Jon Jones. But after the Santos fight, he was in a position where he had to start over again. Again, though, he wasn’t rattled. Now 29 and a father of three, he wasn’t a kid anymore, but he always kept life in and out of the Octagon in perspective. It’s a lesson he hopes to impart to the up and comers in the sport.

“They’re out chasing girls and they’re gonna be the next Conor McGregor,” Smith said. “They’ve got the swag and the step and they’re doing all this other stuff. They’re selling tickets and going to bars and they’re all over the place. And I try to tell them all the time, you’re never gonna be successful until you have your life in order. You see these guys having all these problems, and they’re so dedicated to fighting that they’re letting their personal life fall apart. You see their relationships falling apart, their marriages fall apart, their connection and relationship with their children is falling apart, and they just keep saying, ‘I’ve gotta make it, I’ve just gotta focus on this. That’s what you did, Anthony.’ No, I balanced all of it. I realized what’s important and what’s important to help me get to where I need to go. It doesn’t matter if I make it to be a world champion and I end up with nothing once I get there. If that’s the case, I’d rather not be a world champion and still have my family. And that’s how I operate.

“So my home life is put together separately from fighting, and I think that’s the problem with these kids – that the whole of who they are and everything that they see themselves as is based around what they are as a competitor,” he continues. “And if all that goes away, they don’t have anything left. This is what I do, this isn’t who I am. And when I’m home, that’s who I am. I’m a father and a partner and I help the community and I help kids’ wrestling and it’s totally different. I’m able to separate the two.” 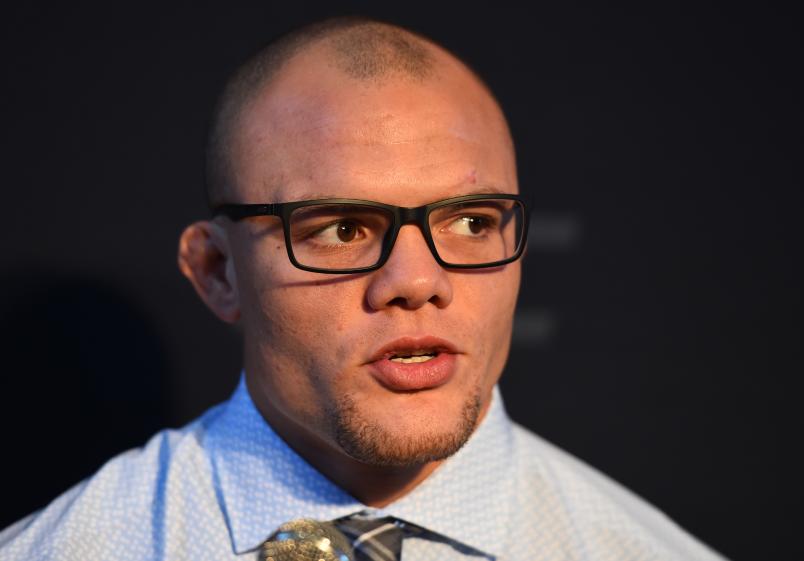 So life at home was as good as it ever was, but in his professional life, he had to win and win impressively. So he did.

Smith knocked Evans out in 53 seconds.

Next, in July, was another former 205-pound champion, Mauricio “Shogun” Rua.

Smith knocked Rua out in 89 seconds.

“There were several times where I was like, ‘Damn, I need a break. I need to slow down. I’m not gonna make it if I keep going at this speed,’” he said. “The June Rashad fight and then the quick turnaround with Shogun and then after the Shogun fight, I was like, ‘Thank God, I’m gonna get a break now.’ I got a bonus, I was feeling good, and I was back in a good spot. I was in the rankings in two fights. So I said, ‘I’m gonna wait for my 30th birthday, take a break and just enjoy whatever’s left of the summer.’”

That “vacation” lasted less than a week. 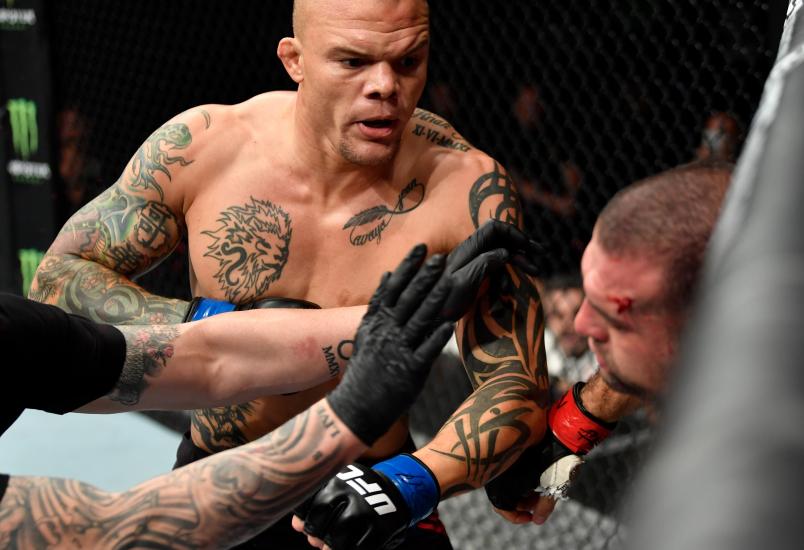 Volkan Oezdemir was coming off a challenge for Daniel Cormier’s light heavyweight title. Now he was going to face the upstart Smith in the main event of UFC Moncton on October 27. That meant another quick turnaround for “Lionheart,” who embraced the grind again. And again, he pulled off the finish, submitting Oezdemir in the third round.

By the end of 2018, Smith had a 3-1 record with three straight finishes at 205 pounds. He also got a gig providing expert analysis on the FS1 pre and post-fight shows for the UFC 232 event. Back before the Santos fight, could he have imagined his year ending like it did? 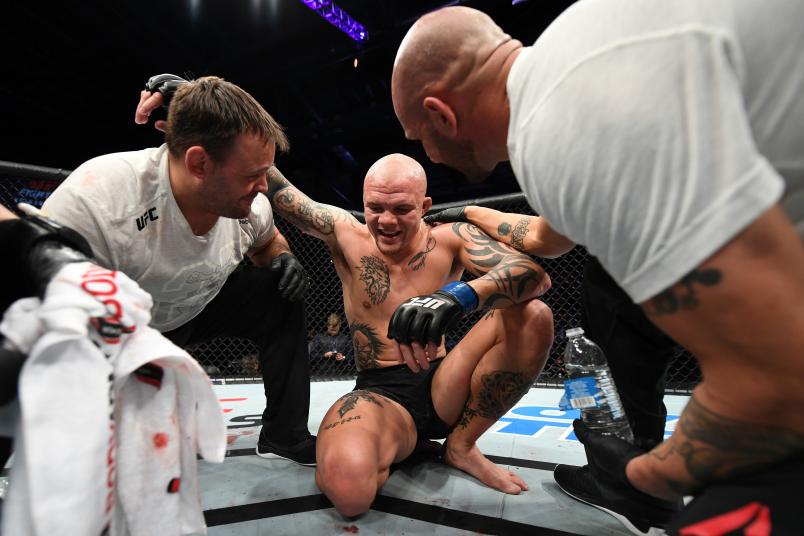 “That’s too far-fetched,” Smith said. “That’s too much in a short amount of time. There’s no way I would ever have been able to have guessed that this was gonna happen in the way that it did and with the speed that it did. But I think other people have had those opportunities for that to happen and they don’t allow it to. And I really believe that. I think that it’s my willingness to put the work in and it’s my willingness to sacrifice and my family’s willingness to let me do it. It’s gotta be a team effort. It’s not just me. It’s everybody.

Anthony Smith laughs when talking about his “break” to kick off 2019, because if he has his way and the stars align, he will get a call to go back into camp to face Jones later this winter. Smith is a logical choice, with the only fellow 205-pound contenders in the picture with him being Corey Anderson and Jan Blachowicz.

But beginning with a little back and forth on the UFC 232 post-fight show, Smith became a frontrunner to challenge Jones, who is coming off a rematch win over Alexander Gustafsson.

“Bro, don’t use a FOX platform to try and talk your way into a fight,” said Jones on FS1. “Show me an impressive fight.”

“I think I’ve been pretty respectful so far, Jon,” Smith responded. “You should try it out.” 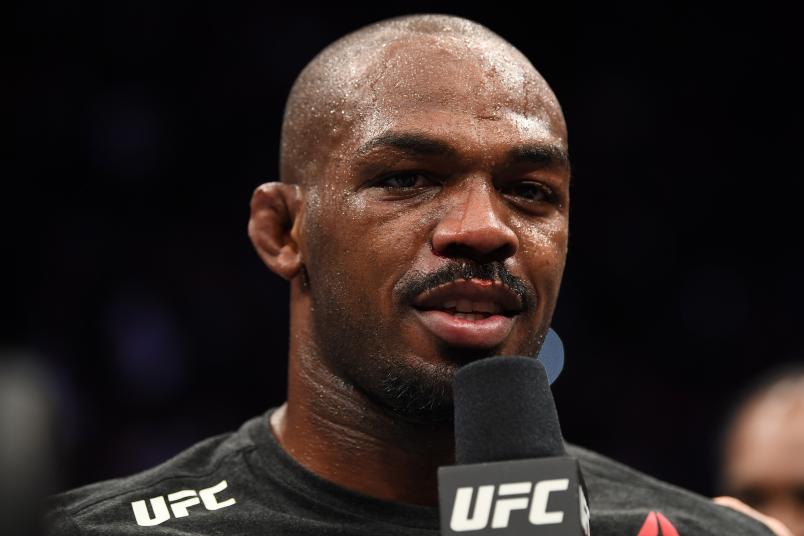 “A hundred percent,” said Smith. “I’m sitting behind the FOX desk watching the main event with Michael Bisping and Kenny Florian, and I remember pointing down at the screen, tapping it with my finger and saying, ‘That’s a beatable Jon Jones. That guy is beatable.’ Up until the last seven months, I never looked at Jon Jones as a potential opponent. So I think the way that I was looking at him before was always like, ‘That guy’s amazing. He’s a great fighter.’ And now that I see him and I’m watching him, I see holes, and I see places where I can attack him. I see a beatable guy, I see a guy who looked human. I don’t know if that was his performance or if it was my mind watching him as a potential opponent instead of enjoying watching him fight.”

Whatever it is, Anthony Smith is ready for that phone call, ready to challenge for the title, ready to shock the world.

“I think I’m the only one people are gonna look at and say, ‘Hey man, he might beat Jon Jones.’”