On the Rise: Up-and-comers to watch Saturday

From the shores of Lake Erie to the banks of the Rio Grande, the Octagon is on the move from Cleveland following last weekend’s epic Pay-Per-View for a stop in Hidalgo, Texas, for UFC Fight Night: Poirier vs. Johnson.

While the final two fights on Saturday’s event at the State Farm Arena are getting the lion’s share of the attention as Fight Night looms, there are a trio of talents competing earlier in the evening that deserve watching. 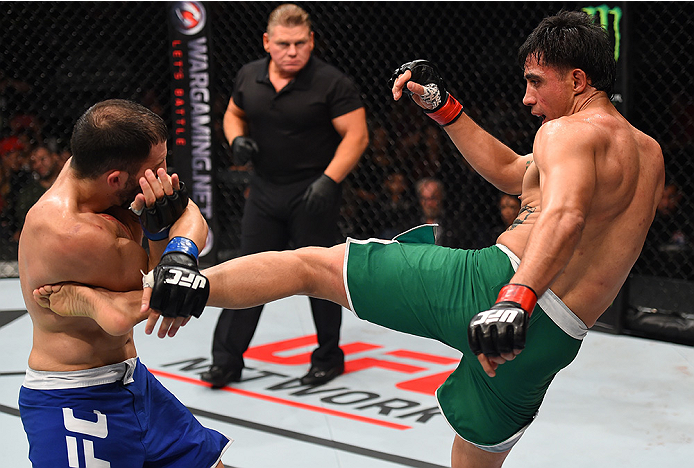 The 25-year-old newcomer makes his UFC debut against TUF: Latin America Season 1 bantamweight winner Alejandro Perez in a bout that should deliver excitement.

Morales has amassed an undefeated 6-0 record heading into his first foray into the Octagon, with his most recent victory being a 20-second knockout win over Mario Israel at RFA 38 in June. While it was certainly the fastest finish on his resume, the Reseda product is no stranger to getting the job done efficiently inside the distance, as five of his six wins have been stoppages, including a trio of submissions.

Perez is coming off his best UFC performance to date – a first-round finish of Ian Entwistle in April when the Octagon debuted in Zagreb, Croatia – and he’s won three of four overall since ascending to the big leagues. That said, Morales has been on a very good run of his own and enters this one brandishing a size advantage, so it should be electric once “The Warrior” and “Diablito” start throwing leather.
RELATED: Matchups - Morales vs Alejandro Perez | Montano vs Randy Brown | Gomez vs Jose Quinonez

In a battle of welterweights discovered on two different UFC programs, TUF: Latin America Season 2 winner Montano squares off with Dana White: Lookin’ for a Fight signee Randy Brown in a critical matchup for both men.

Montano edged out Enrique Marin by split decision last November in Monterrey to claim the TUF title and his place on the roster, the victory pushing his winning streak to three overall, a run of success that kicked off with a first-round submission win over fellow UFC fighter Marco Polo Reyes. The 30-year-old Mexican brings a solid striking attack to the cage, though he’s actually finished more fights by submission to this point, and has a little more experience than the 26-year-old Brown.

As the UFC continues to make annual trips to Mexico, the emerging talent coming off the various seasons of TUF: Latin America will continue to be given the opportunity to establish a firm footing in the Octagon and flourish at home and while this fight is taking place in Texas, it’s as great an opportunity for Montano to make a strong second impression in his sophomore effort as if he were competing on this year’s TUF: Latin America Finale in November. 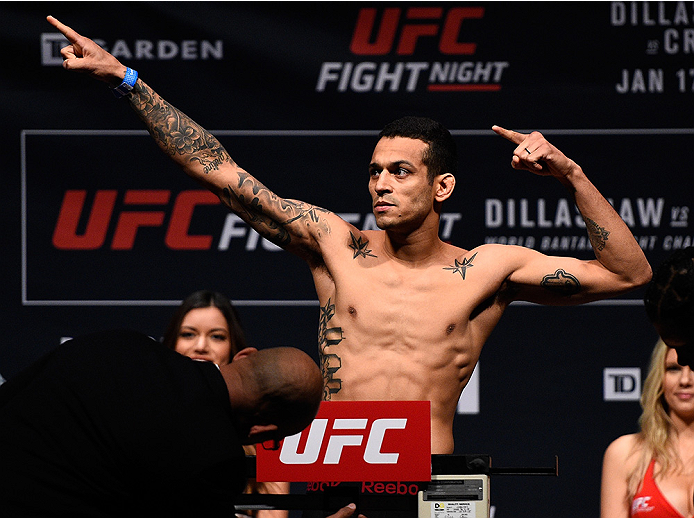 After hustling out to a perfect 6-0 start to his professional career, Gomez jumped at a short notice opportunity to graduate to the Octagon in an all-New England matchup against Rob Font earlier this year in Boston. Unfortunately for “The KO King,” things didn’t go his way as the Team Sityodtong product put a halt to his unbeaten ways, stopping him with a slick combination late in the second round.

Having made the cross-country trek to set up shop at Team Quest in California, Gomez returns in a matchup with “Teco” Quinonez that has Fight of the Night written all over it.

The 30-year-old Gomez has solid striking and a willingness to stand in the pocket and trade, which Quinonez should accommodate on Saturday night, much to the delight of the fans in Hidalgo. Bantamweight is quickly becoming a shark tank and this is an opportunity for Gomez to prove that he’s capable of swimming with the other predators in the 135-pound ranks.