On the Rise: Albany Edition

A couple weeks back, the UFC delivered a day-night doubleheader from Belfast and Sao Paulo that brought 20-plus fights into your living room over the course of the day.

This weekend, the organization is going back-to-back with events on Friday and Saturday night, beginning in Albany, New York and then returning to Toronto, Ontario, Canada for the first time since UFC 165.

Here are three to watch Friday night in the New York State capital.

This is On the Rise: Albany Edition.

One of the most UFC-ready winners of The Ultimate Fighter in recent years, Sanchez showed how far ahead of his fellow contestants he was both during the competition on Season 23 and again in the finale, where he shut down Khalil 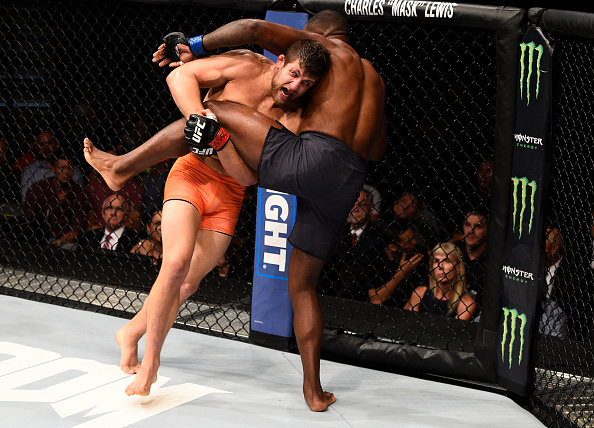 Rountree to earn his place on the roster.

That fight came at light heavyweight, but this fight – his sophomore appearance in the Octagon – is back at middleweight, where he put together a strong resume on the regional circuit, leading to his selection for the long-running reality TV competition.

With a strong grappling base and good size for the division, the former RFA star is far more polished than you would expect from a fighter with just 10 pro fights under his belt, but Sanchez plays to his strengths, stays within himself and has gotten his hand raised eight times thus far, including each of his last three appearances.

Squaring off with Trevor “Hot Sauce” Smith, this is an opportunity for “El Dirte” to add a victory over a seasoned veteran to his resume and put himself in a position to make strides in the middleweight division in 2017.

Arriving in the UFC backed by a great deal of hype after finishing his final two fights on the regional scene in 60 seconds combined, “The Bonecrusher” rebounded from a sluggish first five minutes in the Octagon to show why he’s considered one of the most exciting prospects in the lightweight division.

Finding his rhythm in the second, Diakiese took the fight to Lukasz Sajewski, showcasing his crisp striking and punishing combinations. Keeping the fight in space and avoiding the clinch, the promising 23-year-old got loose and got the victory, finishing the “Wookie” with a torrent of strikes that started with a knee and ended with a string of unanswered punches.

Diakiese faces Frankie Perez in his second Octagon appearance, welcoming the Mark Henry pupil back to the cage following a sudden retirement that turned into a 16-month hiatus to reset and refocus. Another strong showing against the tough New Jersey native will set the Brit up for bigger and better once the new year arrives.

Third time is the charm, right?

That’s what the ZUMA product is hoping after having each of his first two scheduled appearances scratched from the calendar.

Janes was originally penciled in to make his debut close to home in Vancouver at the end of August, but his opponent, Adam Hunter, was pulled from the card after weighing in Friday morning due to an anti-doping violation. Two months later, Janes was one of the casualties of the Fight Night event in Manila being postponed.

This weekend, the Brazilian jiu-jitsu black belt will step in (hopefully) with the returning Keith Berish, who fights for the first time in more than two years after suffering serious damage to his knee in his promotional debut back in July 2014. Provided everything moves forward without a hitch (knock on wood), Janes will finally get the chance to show the skills that made him the guy everyone avoided on the Canadian regional circuit the last couple years.