"Of course I have big pressure for the fight, but this is good for me." - Rin Nakai 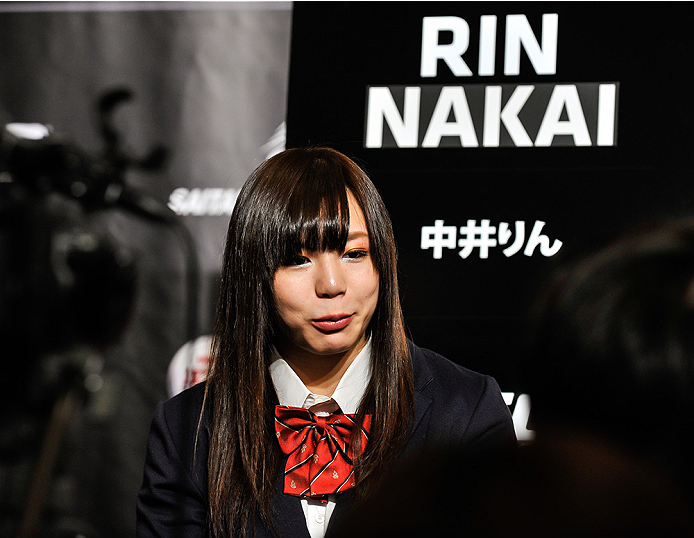 TOKYO, September 19 - The United States has Ronda Rousey. If all goes well on Saturday night against Miesha Tate, Japan might have Rin Nakai, not just a fighter but a fighting icon, the type of high-profile and high-level athlete that can kickstart a movement in women’s MMA much like Rousey has.

In Japan, the need for a fighter to ignite WMMA in the country wasn’t always there. Fighters like Megumi Fujii, Megumi Yabushita, and Yoko Takahashi weren’t just loved and respected at home, but hardcore MMA fans around the world knew who they were as well. But in recent years, there has been a starpower void, and with Nakai, an eight-year pro, making her UFC debut, the potential is now there to reach a wide audience.

“Of course I have big pressure for the fight, but this is good for me,” Nakai said through translator / manager Fumihiko Ishii. “To win my fight will help Japanese female MMA to grow, so that's why I've got to make sure that I perform well in my UFC debut.”

With an unbeaten 16-0-1 record, the 27-year-old Ehime native has shown that she is ready for the ladies of the UFC’s bantamweight division, but it was only with the announcement of this weekend’s UFC Fight Night show in Saitama Super Arena that Nakai felt she was prepared enough to throw hands with the best in the business.

“I had some offers to fight in some organizations such as Strikeforce,” she said. “However, that was a little bit early for me to fight outside of Japan, so I focused on fighting in Japan.”

At home, the powerful grappler ran through the local competition, and when she added the names of quality American standouts Tara LaRosa, Sarah D’Alelio, and Brenda Gonzales to her resume, it was clear that the timing was right for all parties.

And then the floodgates opened once it was announced that Nakai would be facing Tate in her UFC debut. It’s a daunting task, one that shows the respect that the UFC brass has for Nakai by putting her in such a tough fight in her first bout in the promotion, and a rush of media attention followed – some focusing on the revealing videos she cut while fighting in Pancrase, others focusing on the prom-like dress she wore to the kickoff press conference for the event, and precious few looking at her ability to fight. But as the adage goes, any publicity is good publicity, and Nakai seems to be handling it well while simply saying that the attention has to do with her being in the UFC, and nothing more.

“I feel because of the size of the UFC, that's why I've gotten more attention and more people are watching,” Nakai said.

Nakai is humble and shy to a fault, only giving brief glimpses of her personality while insisting that if the UFC wasn’t in Japan, she wouldn’t necessarily be fighting in the Octagon. But the UFC is in Japan, leading her to say “This was the perfect time for me to be in the UFC. The only difference is that the opponent is tougher than the ones I've fought before.”

Maybe it is perfect timing. But Saturday night will tell that tale when she meets Tate, a former world title challenger who Nakai says she has been watching since just before “Cupcake” won the Strikeforce bantamweight belt.

“I believe she is very smart, has good game planning, and also has stamina,” Nakai said. “But I am confident that I'm a well-rounded MMA fighter, so I'm going to put on a performance, not only in the ground game but in the stand-up game and with good technique.”

After that, who knows, but you can expect that the world will keep watching Rin Nakai.