The topic is the four-fight losing streak Jessica Eye endured in her final days in the bantamweight division. The response from Cleveland’s Eye is immediate and to the point.

“I don't know who that is,” she said. “I left that girl behind. This is who they've been waiting on and I don't identify myself with that girl. They can just let her go.”

She means it, and no one could blame her. Now back competing in the flyweight division where she first made her name in MMA, Eye has moved on from those days, even though they do remain a part of her story.

For context, Eye’s first 11 pro fights were fought in and around the 125-pound weight class, and she won 10 of those 11 fights. Unfortunately, the UFC didn’t have a women’s flyweight division, so Eye had a problem. 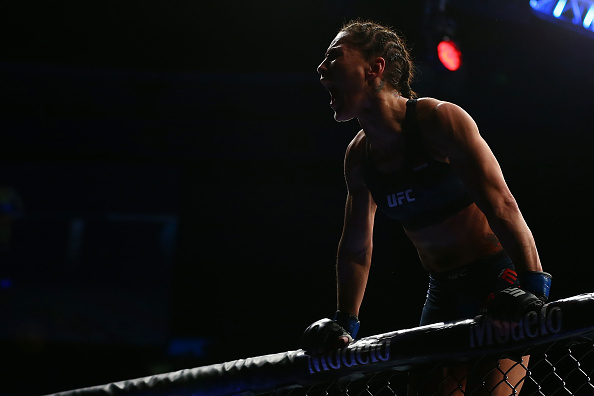 “It was wrong weight, wrong time,” she said. “And now it's right weight, right time. I can't go back and change anything. I was given an opportunity to come up a weight class and where was I gonna go? Was I not going to go to the UFC? Where else is there to go to fight? I'm a gamer, I tried, I believed I could be the best '35er and I contended with all of them.”

Eye got no gimmes at 135 pounds, fighting a former world champion (Miesha Tate), a TUF winner (Julianna Pena), three world title challengers (Bethe Correia, Sara McMann, Alexis Davis) and two veteran contenders (Sarah Kaufman and Leslie Smith). And like she said, she was in every fight. Some would say more than that in bouts she lost on the judges’ scorecards.

“Some of the decision losses that I have, I do not believe in them wholeheartedly and not even because I'm the actual fighter,” Eye said. “I do not believe I lost some of those fights. I'd have to say that the only fight that I felt like I actually lost was the Miesha fight. But the Pena, the McMann, the Bethe Correia fight, even the Alexis Davis fight, those were my wins and they were taken from me. And I think I'm gonna take all of that and use it as fuel in the 125-pound division because none of those girls (at 125) could be in there with those girls. None of them. They would be finished by them or be intimidated by their presence. And that's something I plan to impose on all the girls in the flyweight division.”

In January, Eye announced her resurrection at 125 pounds with a win over Kalindra Faria. It was a tough 15-minute battle, but in the process, the 31-year-old showed off new wrinkles to her game as she earned what may very well be the biggest win of her career thus far.

“The fight with Kalindra, she's way tougher than what people give her credit for,” Eye said. “The girl has won at multiple weight classes, fought some of the best, taking them to decisions, and I think she's underestimated. She's a hard hitter, and I know what most Brazilians lack, and that's wrestling. And I think it's something a lot of females lack in this division, the ability to switch their game up. Especially in the flyweight division, the wrestling and the striking is not blended very well, and I felt like I went in and fought a very smart fight. I knew it was 50-50 on the feet, but once I got it to the ground, it wasn't 50-50. The things that I did in that fight were things that I practiced, and it was the first time in a long time in my life where I was like, 'Wait a minute, so that's why we practice?' (Laughs) The double leg and the inside trip was planned, and it was crazy that it was there. I knew where the fight needed to go at all times, and that was to the ground.”

Known for her standup game, Eye won the Faria fight with her ground attack. That’s made her dangerous and, as she points out, dangerous is good.

On June 23, her next chance to get another win comes against Australia’s Jessica-Rose Clark.

It’s a long trip from “The Land,” 23 hours to be exact, but Eye has been on site since last weekend, guaranteeing that no stone is left unturned on the way to fight night.

“It's a completely different world,” she said. “The humidity's high and I can't expect myself to adapt during one of the most important weeks and for something I've trained so hard for. I felt like it was right to come out early and do this. I want to rule out any doubt next week.”

And those are the keys for Eye these days. No regrets about the past. No doubts about the future. It’s Evil time.

“The words ‘eliminate self-doubt’ have been said multiple times to me throughout this camp and I need to say it too,” she said. “It's like the momentum that you can't stop, like things are just happening the way they're supposed to. My weight's coming down, I came here early, I was able to do all that so that I'm able to continuously move forward towards a title run. At 125, all bets are off. I'm given a full chance at success.”