Riggs Revved up for Return to Middleweight 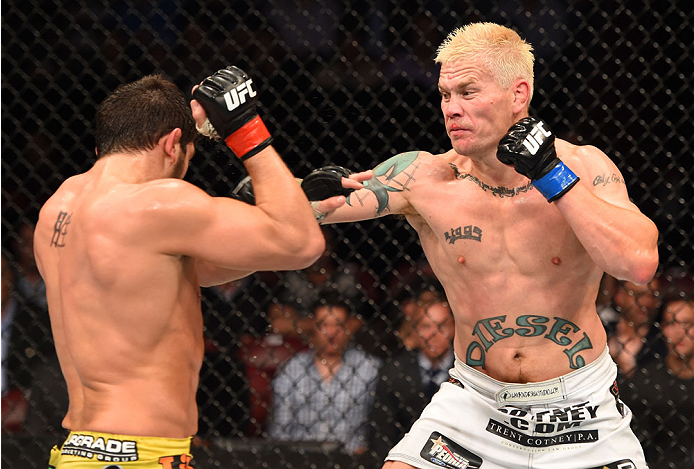 Finally, Joe “Diesel” Riggs has come back to Las Vegas.

“Has it been that long?” Riggs asked when told it has been nine years since he last fought in the Fight Capital of the World. His memory jogged, he recalls the night of August 17, 2006, when he beat Jason Von Flue at Red Rock Casino and picked up a Submission of the Night bonus in the process.

“It actually does feel like nine years,” he laughs, 32 years old and hoping to recapture some of that Vegas magic when he faces Ron Stallings in the main UFC FIGHT PASS early prelim bout on Saturday at the MGM Grand Garden Arena, where he also had his share of luck, defeating Joe Doerksen at UFC 49 in 2004.

“When I was a kid, I fought all my fights here and I got it out of my system early,” he said. “In the beginning (of the Zuffa era), almost all the fights were here, so a bunch of my UFC fights were here in Vegas. When I got in the UFC, I didn’t know what it felt like to fight in the UFC outside of Vegas. But it’s cool to be back. The last time here I got Submission of the Night against Jason Von Flue. And the first time I fought at the MGM Grand, I won, so it’s a good omen.”

Another good omen for the Arizonan is that for the first time in a long time, fight week isn’t the longest week ever, a development due to his move back to the 185-pound weight class.

“170 pounds just killed me,” Riggs said. “It was too much weight to lose. I don’t care how lean I am at 185; I’m not the body type to get real shredded and lean, and I lose
all my power dropping that weight.”

Riggs did win his share of fights at welterweight on the regional circuit, but once he returned to the UFC in 2014, losses to Ben Saunders and Patrick Cote were the end result. And as he looks for his first UFC victory since that Von Flue bout in 2006, the idea of winning is more important than winning any bodybuilding contests.

“I look better,” he said when asked how fight week feels thus far. “I don’t look like I’m sick and I’m able to eat. It’s not like losing weight at 170. I don’t have to have a shredded body. I just want to get back in there healthy, and that’s all that matters.”

That, and winning, even if Stallings is still a fighter flying under the radar in the Octagon. To Riggs, the names don’t matter at this level because everyone can fight – and win. 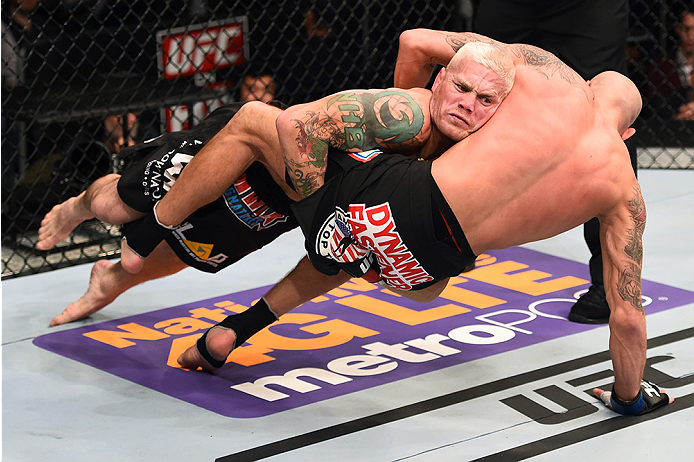 “Everybody in the UFC is tough, and you’ve got to get up for everybody,” he said. “You have to show everybody respect or you’re gonna get knocked out. He (Stallings) is a guy that’s hungry and coming after a bigger name, so I’m up for it. I’m towards the end of my career, so I want to go out on a high note.”

That doesn’t mean Saturday is the end of the road for Riggs though.

“When I started, I was only 21, and my career’s definitely winding down, but this diesel’s got some more running left in him.”