Rico Verhoeven: “I will drag it out so he suffers”

Saddik, who will challenge Verhoeven in the main event of the December 9 UFC.tv Pay-Per-View card, angered Verhoeven when he stated: “I am coming not just for his belt, I’m coming for his team, his family. I am coming for everything he has got.”

The 6ft 9inch challenger compounded that insult by spitting on Verhoeven when the two were squared off at a press conference in Amsterdam last month. The two had to be separated by staff to prevent their issue becoming physical there and then, but Verhoeven says payment for the insults will be extracted in full come fight night.

The usually unflappable champion – who prides himself in his St-Pierre like ability to remain professional at all times - was incensed.

Rico said: “These stupid things he said, about my team, my family, I was like, what are we, mobsters or sportsmen? It annoys me a little bit, but I am keeping things on the sporting level, conducting myself like a champion. I’ve had other opponents start talking like that and I always settled the score – by finishing them. It will be the same with Jamal - he is going to pay the price and the price will be high.” 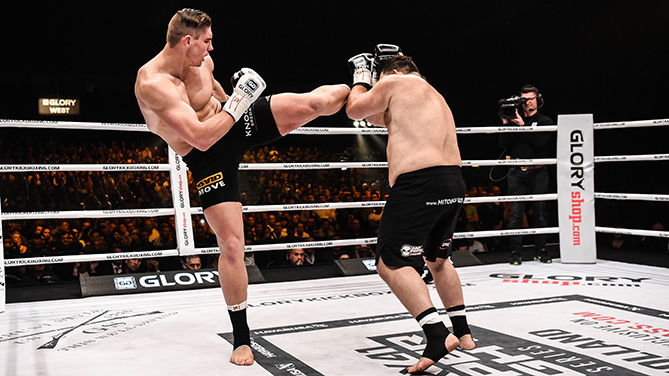 Jamal holds a TKO victory over the champion, having beaten the “King of Kickboxing” when they collided years ago in their early 20s.

The 6ft 6inch Rico – widely regarded as the best kickboxer on the planet – is looking forward to avenging that earlier loss. He added: “I am going to make him suffer a lot. He’s going to experience a lot of pain during this fight and those three- minute rounds are going to feel like five minute rounds.

“When you are getting your ass kicked, time goes by slowly.

“I’m going to give him five rounds of that, drag it out so he suffers more, and then in the final minute or so I am going to knock him out.”

The press conference incident made headlines around the world and perfectly illustrated the deep and genuine dislike the two fighters have for each other. But Verhoeven believes Ben Saddik, 32-5, (26KO’s) acted more from fear than anger.

“There’s so much media attention, so many people watching, we will be a sold-out arena with people going crazy: that’s a lot of pressure. I love it, to me it feels like home. He says the same but it’s not true. He’s scared, he’s a scared little bitch. He’s going to see every corner of this ring on fight night and then I am going to knock him out.”

Verhoeven is known for the intensity of his fitness and conditioning regime, to such an extent that he has regularly been featured by magazines such as Men’s Health and Muscle & Fitness. He has an intensity of focus that few fighters can match.

And yet, even with that incredible focus, the training camp for this fight has been one of the toughest of his life, a rollercoaster of highs and lows. He was thrilled to be chosen as the voiceover actor for the lead character in the Dutch-language version of the ‘Ferdinand’ animated movie (John Cena voices the US version) but his joy was shattered by the passing of his father on October 30.

“It has an impact but I try to use it as positive fuel,” he sighs.

“I know my dad always wanted me to train hard and be a champion. I know that it was his choice to stop fighting Alzheimers, I cant argue with that. He said he was done with fighting it, that he just wanted rest.

“I respected that, and we had some time together and I thank god for that. I hope he found his peace and now its on me to keep fighting and make sure I make him proud.”

This Saturday, all of Verhoeven’s emotions will be channeled into his title defense.

“The biggest threat from Jamal is he is big and strong and that’s it. That’s not enough to be champion. He is not ready to be champion and he never will be. He is not on that level and I am going to show him that on December 9.”

The greatest kickboxer in the world looks to avenge a devastating early-career defeat as GLORY heavyweight champion Rico Verhoeven steps into the ring once more with “The Goliath” - 6ft 9inch, 270lbs Jamal Ben Saddik. The rematch for the heavyweight title is the main event of the stacked GLORY: REDEMPTION kickboxing event from Rotterdam, Netherlands. GLORY: REDEMPTION begins 4 pm ET / 1 pm PT, Saturday, Dec. 9 and is available for $29.99.