Ranked Bantamweight Ricky Simon Lays Out Who He Would Like To Face Next Inside The Octagon After Winning Five In A Row
By E. Spencer Kyte, on Twitter @spencerkyte • Dec. 27, 2022

For the last several years, the UFC bantamweight division has stood out as the deepest collection of talent on the roster — an intoxicating mix of established names, ascending stars, tenured veterans, and emerging prospects combining to deliver consistently outstanding performances that leave the audience elated.

“It’s been one of my favorite divisions to watch, too!” said Ricky Simon, who currently sits at No. 10 in the bantamweight rankings. “The guys are good everywhere and it’s been cool to see some of the veterans moving down and the switch happening with the new generation. Sometimes, the guys at Nos. 16-25 are even scarier than the Top 5 because there is less film on them and they’ll throw caution to the wind.”

You don’t have to look too far back in the calendar to recognize that Simon is correct about the depth of talent and the scariness of some of those unranked competitors, as on the final fight card of the year, UFC freshman Saidyokub Kakhramonov turned in an outstanding effort before getting caught in a ninja choke against ranked standout Said Nurmagomedov.

The fact that the unranked guys are dangerous as all get out, coupled with each fight card seemingly thrusting another fighter from the 135-pound ranks into the spotlight, has a way of forcing even some of the best in the division into the background. 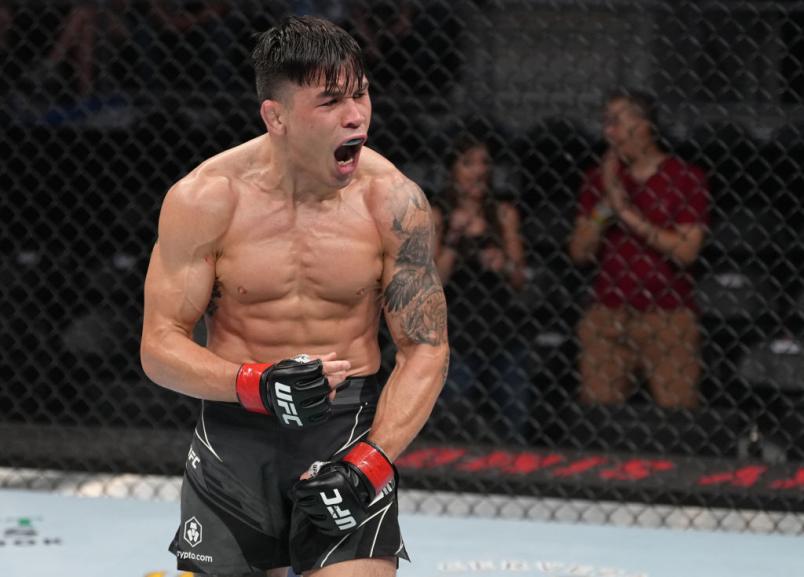 Ricky Simon reacts after his submission victory over Jack Shore of Wales in a bantamweight fight during the UFC Fight Night event at UBS Arena on July 16, 2022 in Elmont, New York. (Photo by Jeff Bottari/Zuffa LLC)

Right now, Simon feels like one of those guys.

Currently riding a five-fight winning streak and coming off a second-round submission victory where he handed Jack Shore the first loss of his professional career, the Pacific Northwest native has become a little bit of a forgotten figure in the Top 15.

His name doesn’t come up as quickly when talking about the up-and-coming contenders in the division as some of his more prominent contemporaries, while the combination of not fighting since that July victory over Shore on Long Island, coupled with his low key approach to social media, have hurt him, as well.

“I feel like I keep producing, so it’s not for lack of trying on my end,” said the proud new father, laughing, when asked about being slept on by fans and media alike. “I was trying to get a fight before our baby was due, but that didn’t end up working out. I would like to get things going, but I think I’m doing the right things getting these finishes.”

There is no denying that the 30-year-old has been doing the right things in terms of his performances inside the Octagon.

He closed out his 3-0 campaign in 2021 with a knockout win over veteran contender Raphael Assuncao before becoming the first man in both the amateur and professional ranks to get the better of Shore in July. The victory extended his winning streak to five and carried him further up the divisional ladder, all of which he attributes to a shift in mindset and finding the right combination of coaches to work with as he pursues his goal of winning championship gold.

“I always heard about that person that might be better in the gym and doesn’t perform quite as they should on fight night, and I think I had a little bit of that early in my UFC career,” admitted Simon, who won each of his first three UFC appearances and is 8-2 overall inside the Octagon. “But now, at 30 years old, I’ve been doing this for over a decade. I have a wealth of experience under my belt and I’ve felt that shift from where I’m not a prospect any more — I’m a legit contender.

“Even in my wrestling career, I never belonged to just one camp because maybe another camp did something better,” continued Simon, who spreads his time between working with Fabiano Scherner at Gracie Barra Portland, Team Oyama in Orange County, and Syndicate MMA in Las Vegas. “I never wanted to leave a stone unturned, and so I think I get something out of (every place I train).

“The grappling I get at Fabiano’s gym is phenomenal, and it compliments my style so much, and then adding Oyama’s is a great striking style for me, we have great chemistry. And then at Syndicate, getting to train with John Wood and my cousin, Vince Morales, it’s just two more great minds and the perfect concoction.

“I feel like I’ve figured things out at this point and I’ve had this mentality switch to where I feel like I’m the best in the world,” he added. “Instead of wondering if I am, I know I am, and I feel like that’s why I’m getting these finishes, as well.”

While the arrival of his daughter in November has kept him busy at home as of late — and added a new wrinkle to iron out when it comes to his training routine — Simon has been champing at the bit to get busy in a fight camp and make his return to the Octagon.

And he has some ideas on who he’d like to face first.

“O’Malley is the obvious fight I would like,” began Simon, who called out “Sugar Sean” again following his win over Shore in July before the Dana White’s Contender Series graduate went on to defeat former champ Petr Yan in October at UFC 280. “I’ve been calling for that fight for a while now, but I’m a realist and I know that he made that big jump to the No. 1 spot, so they’re probably looking for something different for him, but I would like to just keep moving up right behind him.

“A rematch with Merab (Dvalishvili), who is No. 3 in the world (would make sense),” he continued. “I have a win over him — I was his last loss — and I think that is a matchup they were interested in. We’re No. 1 and No. 2 for takedowns in the weight class, so it makes for a really fun fight, especially as a five-round main event. I think that’s great for Merab and I.”

“That’d be a dream come true for me; I would love that,” he said excitedly. “But there are plenty of fights. I don’t think there are many guys in the Top 10 matched up right now, so I have options, but I would like to get something going.”

Whether a headlining assignment against “The Machine” comes together or not, Simon envisions competing three times in the year ahead.

“In my head, I see two fights and then I fight for the belt. Who knows — if I do get that fight with Merab next, I’m right there for the No. 1 contender fight, or depending on what happens in the division, I could be there after beating Merab.

“But that’s my goal: three fights in 2023 and I end the year as the bantamweight world champion.”

Making a run like that in a division as dangerous as bantamweight is difficult, and there are challenges at every turn, but the way Simon sees it, that will only make his success even sweeter.

“(Fighting in this division) is exciting, it’s scary, but it’s going to be so rewarding when I have that belt and I’m the best in the world in one of the toughest divisions in the world. I can’t wait!”