After two years away, Rick Glenn returns in a new weight class at UFC Fight Night: Thompson vs Neal.
By Thomas Gerbasi, on Twitter @tgerbasi • Dec. 15, 2020

It took lying naked and exhausted on the locker room floor at the UFC Performance Institute for Rick Glenn to decide that his days as a featherweight were over.

Of course, the Iowan went down fighting, but he still had a weigh-in to get through and a fight to fight against Kevin Aguilar to get through on November 30, 2018, yet the die was cast.

“I always told myself if I ever miss weight, I'm going up a weight class,” said Glenn, who came in at 148.5 pounds for the Aguilar fight, then lost a unanimous decision the next night. “I pushed it to the very end. I've gone through this weight cut for years. I've been at '45 for a long time and it just caught up to me. It was too much.” 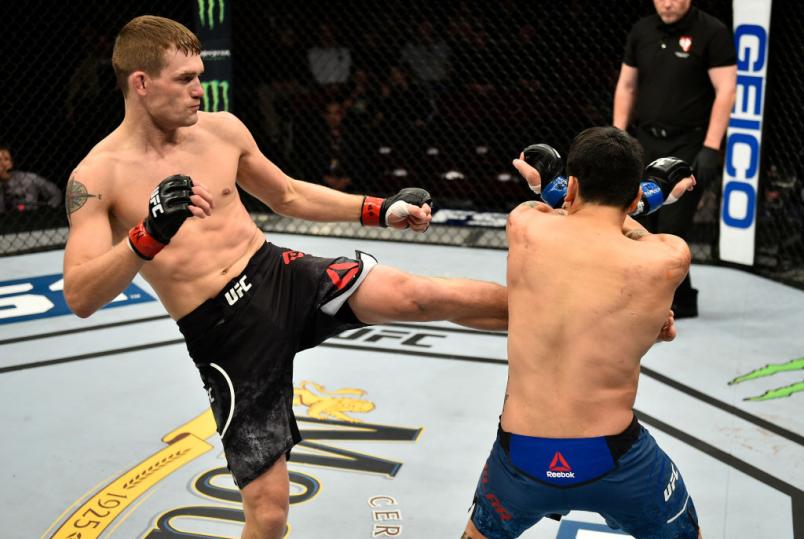 On Saturday, Glenn fights at 155 pounds for the first time since 2016 when he faces Carlton Minus on the UFC Fight Night card in Las Vegas.

“I think I'm gonna perform a lot better,” said “The Gladiator,” who has gone through plenty of changes following the Aguilar bout, not just the change in divisional scenery. There was the move back home to Iowa as he and his wife expect their first child in February, the obvious change in training scenery from Team Alpha Male to Absolute MMA and Fitness, and a hip surgery which has kept him sidelined for two years.

Guess we’ve got some catching up to do with Mr. Glenn. Let’s start with his move to Des Moines.

“It's home,” said Glenn. “The house we're in now was my dad's old house and I bought it and renovated it and, ultimately, we wanted to be in Iowa. We still want to travel and stuff, but this is our home, and I had hip surgery, so I wasn't gonna stay out in California and do some job I didn't want to do while I'm healing up, so that recovery was a solid year before I could really get back to full training.”

The injury took place in one of his previous UFC fights and had been bothering him for a while, but Glenn is the stubborn sort, so he put off the surgery for as long as he could until it just became a burden he needed to get rid of if he wanted to move forward in his fighting career. 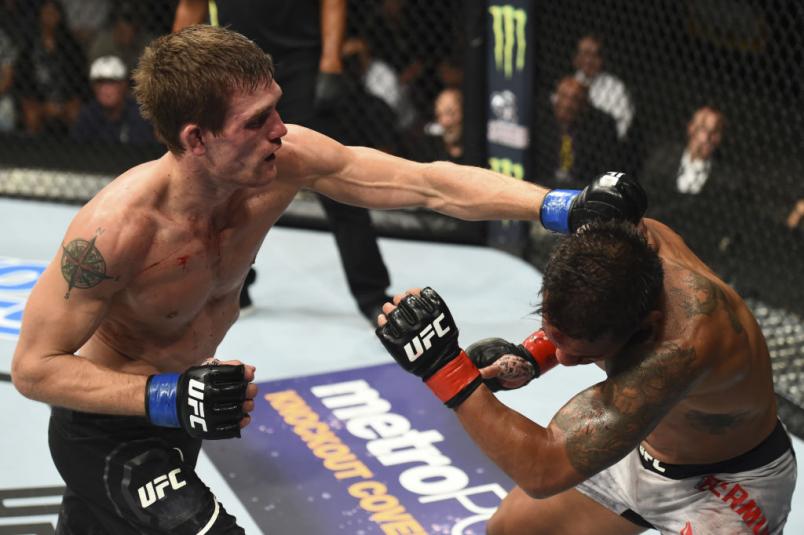 “It just got to be too annoying with the nagging pain,” said Glenn, who had won three of his previous four bouts leading up to the Aguilar bout, showing him to be a man on the move at 145 pounds. But everything ground to a halt two Novembers ago. And as much as he loved living and training in Sacramento, with no fights on the horizon, he missed home more than ever.

“There would be points where we were gone and haven't gone to see our family for almost a year, so we definitely appreciate the convenience of being able to drive an hour or drive five minutes into town and visit with some family,” said Glenn, who also has a team of built-in babysitters when his baby arrives next year.

Glenn even expects to return to Team Alpha Male sometime in the future, but for now, he’s embracing his fresh start against Alaska’s Minus.

“Whenever I come into something new like this, I'm thinking I'm coming in with an empty glass and I'm ready to fill up and reap the rewards,” he said. “It's been a cool journey and the stuff I've learned over the years, I'm just absorbing it all and learning from my mistakes. I know myself better and I'm going up to a healthier weight class and I'm not gonna kill myself cutting weight. I'm performing better, I got a good crew of people around me, and my wife is really happy for it, too. She didn't enjoy me going to '45, and I've had friends and coaches suggest it for quite a while that I needed to move up.” 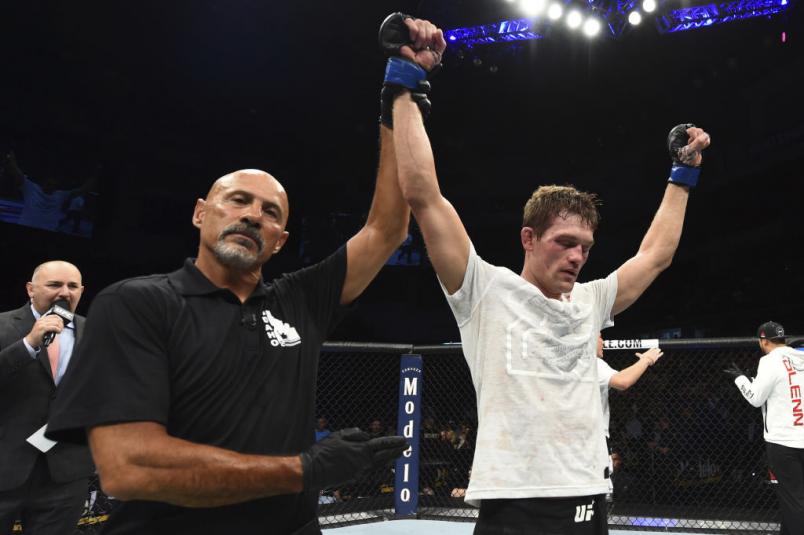 JULY 14: Rick Glenn celebrates his split-decision victory over Dennis Bermudez in their featherweight fight during the UFC Fight Night event inside CenturyLink Arena on July 14, 2018 in Boise, Idaho. (Photo by Josh Hedges/Zuffa LLC)

Told you he was the stubborn sort. If you want another description of the 31-year-old, how about that when he’s on, he’s got the goods to beat anyone he steps into the Octagon with? A bold assertion, but look at Gavin Tucker, currently one of the top prospects at 145 pounds. When Glenn beat him in 2017, it was one of the most frighteningly one-sided fights ever seen in the Octagon. Many thought Tucker would never be the same after the bout. The Canadian has returned to form, but it just goes to show what Glenn can do. So while fighting for a paycheck and to put on good fights for the fans is all well and good, Glenn has loftier goals.

“I've competed with world champions,” he said. “I was in the training room with Anthony Pettis for years, and Ben Askren, and other world champions, and I know what I can do. And I believe I can win a world title with the UFC. So that's the ultimate goal, and the big thing is, I need to go out there and perform and put it on like I know I can.”

It starts on Saturday, and Glenn’s been waiting a long time to hear his name called.

“Ultimately, I have two years invested into this match,” he said.

So Carlton Minus is in trouble, then?

“He's in trouble,” said Glenn, who has missed everything having to do with competing on the biggest stage in MMA.