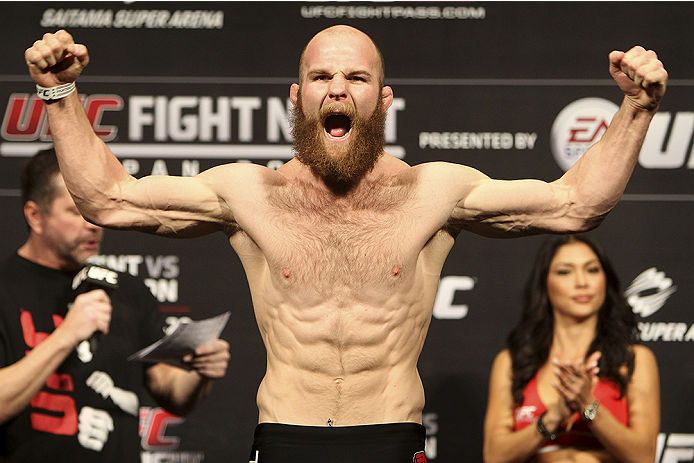 Richard Walsh punches people in the face for a living. On Saturday night, he will do it again when he faces Alan Jouban at UFC 184 in Los Angeles. But despite what that job description entails, Walsh doesn’t approach fights as grudge matches or ways to prove his manhood. This was never more evident than after his September bout against Kiichi Kunimoto.

Fighting in Kunimoto’s Japanese backyard, Walsh appeared to win their three-rounder, but the judges disagreed, awarding “Strasser” Kiichi a three-round split decision. Walsh was disappointed, but it wasn’t his opponent’s fault, and after 15 minutes of battle, the two became fast friends.

“We did hang out in Osaka,” Walsh said. “He took us out for dinner and we had a good long conversation.”

Walsh isn’t the only fighter to become friends with an opponent after throwing hands with him in the Octagon, and while that’s a tribute to the athletes in the sport, does he realize how odd that may sound to some.

“I don’t know, maybe,” he chuckles. “People can think what they want.”

And they will, but that doesn’t change Walsh’s mindset when it comes to fighting. To him, this is far from just a job.

“For me, it’s not about the money,” he said. “It’s about being happy with what I’m doing, being proud with what I’m doing, and representing myself the best I can. I really like martial arts, I like the atmosphere, and I like the positivity in each gym and how we can scrap the ego and help each other out by being competitive. It’s about fulfilling my dreams, and it might sound selfish, but you’ve got to tick the boxes in your life and make yourself happy by having goals and moving forward. Then you can help other people as much as you can.”

The next goal on Walsh’s list is getting back on the winning track against Jouban. And while Walsh hails from Sydney and Jouban from Los Angeles, they are probably more similar than they think, as both are coming off controversial losses while believing that in the Octagon, the best motion is forward.

“After both of our last fights, we want to make sure the fight’s done and dusted within the 15-minute time frame,” Walsh agrees. “I can kind of see how this fight is going to be going. I don’t know what Alan is like personality-wise. He seems like he’s a nice guy, but I feel like he’s a proud guy. You hit him and he’s gonna come forward. You tell him he can’t punch hard, he’s gonna try to punch you as hard as he can. That’s the style he fights with. In that way, it’s a little predictable for me to know what he’s gonna do and I respect him. He’s a tough guy, he’s proved himself before and is obviously coming off a bit of a controversial loss, so we’ve both got a lot to prove, and it makes for a good fight.”

It’s a fight that will be the biggest yet for both Walsh and Jouban, as it sits on the UFC 184 main card, a spot that guarantees plenty of media attention and eyeballs. Walsh is under no illusions when it comes to how career-altering a win might be, but as he’s prepared for Saturday night, the 26-year-old former Ultimate Fighter competitor points out that winning isn’t the only thing on his mind.

We can’t ask for more than that from any fighter. Yet Walsh’s desire to leave it all in the Octagon, win or lose, doesn’t mean he will accept defeat. Not by a longshot, as “Filthy” Rich has the year already planned out.

“2015 is 3-0 Richy Walsh,” he said. “I’m going 3-0, fighting on main cards and we’re going to be finishing fights in dramatic fashion. I’m going to fight on home soil for my last two fights, and I just want to make a name for myself and put Australian MMA on the map.”