Richard Walsh: Beginning the Next Chapter

"If you believe in yourself and you have a goal and you can see the end result you can sell that dream to other people and they can get behind you and believe you." - Richard Walsh 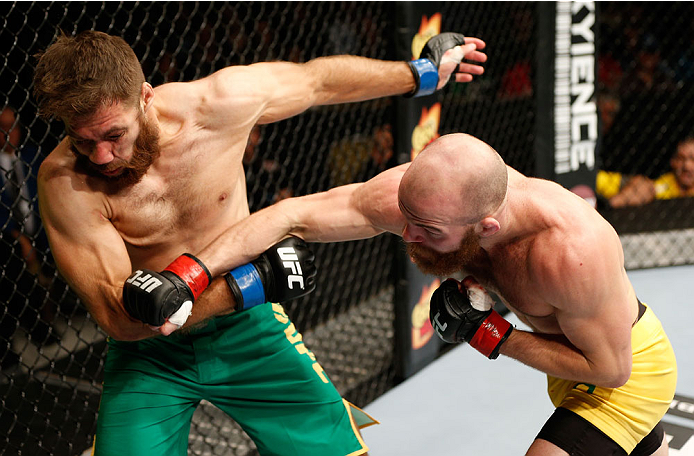 Welterweight Richard Walsh, who fights Kiichi Kunimoto this Saturday at UFC Fight Night: Hunt vs. Nelson in Japan’s Saitama Super Arena, could have done a lot with his life besides fighting.

A university graduate in construction management who briefly embarked on post-graduate studies in law before dropping out to focus on mixed martial arts, Walsh could have easily taken a more conventional route.

So when you ask the former Ultimate Fighter Nations contestant about trying to sell the idea of being a fighter to his parents, Walsh’s answer isn’t surprising.

“Yeah that was hard,” Walsh said. “It was super hard, but they always supported what I was doing.  At times a few years ago it was incredibly hard, people were just telling me ‘hey, you should get a full-time job,’ but I knew in the back of my head as soon as I’d got a full-time job it was going to hinder that process of getting where I was going to,” said Walsh.  “I had to tell a lot of people, ‘no this is what I want to do, this is gonna happen.’  I was trying to sell the dream, if you like, many years before it happened, and I needed people to start hearing that.  This is what I want to do, this is what I’m passionate about and it’s like anything.  If you believe in yourself and you have a goal and you can see the end result you can sell that dream to other people and they can get behind you and believe you.”

Now with his foot in the door of the UFC, and after winning his official UFC debut in April by decision over fellow Aussie Chris Indich, selling the dream has become a lot easier.

“Only a couple of years ago did my parents come around, and in the last year since I’ve made the Ultimate Fighter, everyone’s just been 100% supportive and they’ve seen I’m taking it seriously and making a go of it.  It’s different when people see you’re committed. It’s one thing telling people something, but actions speak louder than words.”

Finding the commitment needed to reach the highest level of mixed martial arts has been an ongoing process for Walsh. The Sydneysider cites a 2009 loss to fellow Australian UFC fighter Robert Whittaker (now an occasional training partner of Walsh’s) as a turning point in his career. Walsh’s mind was elsewhere: he took the fight on short notice before a university exchange semester in the U.S. and lost by rear naked choke after controlling the bout early on.

“For me it was just a big awakening to what can actually happen in this sport,” Walsh said. “You’ve gotta be 100% prepared and fully committed.  It did take me down a peg. After that loss I took it really hard, and I was very upset. Emotionally it’s hard when you lose a fight.  There are two options. I went to the States for a while which I did and did my fair share of drinking and partying, but after that I was just super motivated after that loss to never have that happen to me again.  I was never going to come into a fight underprepared and feel like I lost because of my fitness or because I wasn’t ready for it mentally. So when I say it took me down a peg, it really made me analyze myself and my game and just make sure I was 100% prepared for any fight I was going to get involved in.  So if anything it was a real positive. After that, every training camp’s been really, really good, 100% type commitment, and before that it wasn’t as serious. I was just a young dude being confident.”

In Kunimoto, Walsh faces a tough test.  The well-rounded Japanese fighter has submitted many of his opponents, most recently The Ultimate Fighter Brazil finalist Daniel Sarafian.

“He’s (Kunimoto) a very solid fighter, and I don’t think he has a lot of gaps in his skill. That’s kind of what you expect at this level isn’t it? You expect everyone to be super tough, and technical.  I think where I’m better than him is that I’m faster than him. I think my strikes are more accurate than his, I think I’ll be fitter than him, and I’ve got a good game plan worked out,”

Walsh has joined a number of Australian fighters who are opting to prepare at home instead of moving overseas to join elite training camps like Jacksons MMA or the Blackzilians. While Walsh is fresh from a stint training at Team Alpha Male, he does most of his training camp at Sydney’s VT-1 gym, run by brothers Liam and Dylan Resnekov. While popular wisdom is that the more big names in a training camp the better, there are downsides to that, especially for an up-and-coming Aussie fighter.

“You don’t have the coaches who you’ve had for many years who know you really well on a personal level.  You’re taken out of your comfort zone, you’re with other people, new surroundings, etc., so it’s a little bit different on a lot of different levels. So for me I think it’s great to go to the United States or Canada and do some hard yards very early on, and come back and do the rest with your coaching staff who you’ve had for many years, I think that’s the best way to do it and I think a lot of (other Australian fighters) agree with me at the moment (because) they’ve tried being overseas and it hasn’t worked for them or whatever else”.

And Walsh believes he and his coaches might have Kunimoto figured out.

“We’ve done our research, but we don’t want to focus too much on what he’s good at,” he said. “We want to focus on what I’m good at and bring the fight into that.  Obviously he’s got a huge amount of subs on his record so you’ve got to be aware of a guy like that’s ground game, and just his wrestling as well.  I see trying to keep it on the feet or keep it on the cage, and I want to avoid getting in a tussle in the middle of the ring.  If he takes me down I’m gonna get straight back up to my feet, and if I have the opportunity to take him down I’ll take him down.”