Rich Franklin Named To UFC Hall Of Fame Class Of 2019

“Rich Franklin is one of the original, big stars of UFC, from when we first bought the company,” UFC President Dana White said.
Apr. 13, 2019

Las Vegas - UFC today announced that former UFC middleweight champion Rich Franklin has been named to the UFC Hall of Fame class of 2019 as a Pioneer. The 2019 UFC Hall of Fame Induction Ceremony, presented by Toyo Tires®, will take place on Friday, July 5 in Las Vegas. The event will be streamed live and exclusively on UFC FIGHT PASS®.

“Rich Franklin is one of the original, big stars of UFC, from when we first bought the company,” UFC President Dana White said. “Rich helped us take the sport of mixed martial arts to another level and put UFC on the map during the early days. Rich has always been a class act. He’s a guy who would fight anyone and do whatever it took to help grow the sport of MMA. He is a true legend and I’m honored to call him my friend.”

Franklin will enter the UFC Hall of Fame as the 16th member of the Pioneer Era wing. The Pioneers Era category includes athletes who turned professional before November 17, 2000 (when the unified rules of mixed martial arts were adopted), are a minimum age of 35, or have been retired for one year or more.

“This induction is less of my doing and more of the culmination of the many hours each coach, training partner and my manager spent with me,” said Franklin. “So often people talk about the sacrifices an athlete has to make to succeed, but my friends and family sacrificed far more for my career. Few people in this world live out a childhood dream and turn a hobby into a career, let alone end with Hall of Fame recognition, and God has blessed me with both. I am humbled by the support of my fans over the years and those particularly persistent on this induction.”

Franklin made his UFC debut as a light heavyweight on Saturday, April 25, 2003 at UFC® 42: SUDDEN IMPACT, defeating Evan Tanner via TKO (punches) in the first round. After winning his first three UFC bouts, Rich would headline UFC’s first-ever live network cable show, The Ultimate Fighter® 1 Finale, against Ken Shamrock. Franklin defeated Shamrock via TKO in the first round, earning him a title shot in a rematch against UFC middleweight champion Evan Tanner at UFC® 53: HEAVY HITTERS. 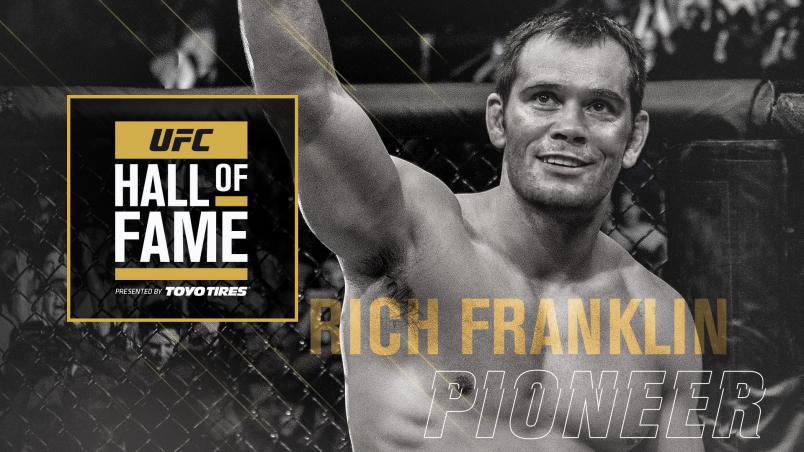 UFC® 53: HEAVY HITTERS took place on June 4, 2005 at Boardwalk Hall in Atlantic City, New Jersey and would mark Franklin’s first UFC bout at middleweight. Tanner, in his first title defense, entered UFC 53 having won eight of his previous 10 UFC fights, losing only to Franklin and UFC Hall of Famer Tito Ortiz during a five-year stretch.

Franklin and Tanner both came out aggressive from the beginning, exchanging punches and kicks throughout the first round, with Evan landing a right hand that floored “Ace” with :30 seconds left, stealing the round. Franklin recovered for the second round, setting the pace through the fourth round, out-striking Tanner. At the 3:25 mark of the fourth round, the bout was stopped by the New Jersey State Athletic Commission doctor due to a large cut over Tanner’s left eye. As a result of his victory, Rich earned a spot as a coach for season 2 of The Ultimate Fighter®, opposite his good friend, UFC Hall of Famer Matt Hughes.

Franklin, who won his first seven UFC fights, successfully defended his middleweight title against Nate Quarry and David Loiseau, before losing the belt to Anderson Silva in October 2006. Franklin’s career was far from over after his lost to Silva, as he repeatedly battled the best inside the Octagon, compiling seven more wins before retiring in 2012. Following his UFC career, Rich became a combat sports executive, joining ONE Championship as Vice President in 2014.

A native of Cincinnati, Ohio, Franklin earned both his Bachelor’s degree in Mathematics and Master’s degree in Education from the University of Cincinnati. Rich began his post-college career as an educator, teaching math at Oak Hills High School in Cincinnati. His unique path to the Octagon led Franklin to become one of the sport’s most respected and popular ambassadors, as he helped to educate a generation of fans about MMA, making him a key figure in the growth of UFC following the first season of The Ultimate Fighter.

The remaining inductees of the UFC Hall of Fame class of 2019 will be announced in the coming weeks leading to the 8th Annual UFC International Fight Week ™, taking place from Wednesday, July 3 – Sunday, July 7 in Las Vegas.