It's All Sunny-Side Up For Ricardo Ramos

Win Or Lose, Brazilian Featherweight Sees The Positives In Everything
By E. Spencer Kyte, on Twitter @SpencerKyte • Apr. 12, 2021

If I had to hazard a guess as to how Ricardo Ramos takes his eggs in the morning, I would lean towards “sunny side up” simply because that’s how the Brazilian featherweight looks at everything in life — seeking out the positives, finding the silver linings, and looking at how things can get better, even when things go bad.

Last summer, as he readied to make his second appearance in the 145-pound weight class against unbeaten British upstart Lerone Murphy, the 25-year-old from Campinas, Sao Paulo, Brazil was limited in his ability to train due to the ongoing coronavirus pandemic. Rather than make the trek to Sacramento to work with the crew at Team Alpha Male as he’d done for previous fights, Ramos had to make due at home, working with limited resources and bodies heading into a critical matchup against another emerging talent.

“Here I have so many guys that can help me, can work with me on strategy and everything,” Ramos said from Sacramento, where he’s been preparing for his return to the Octagon this weekend against Bill Algeo. “I have this in Brazil, but in my last training camp, I could not have that because of coronavirus and that was hard because I had to do everything by myself. 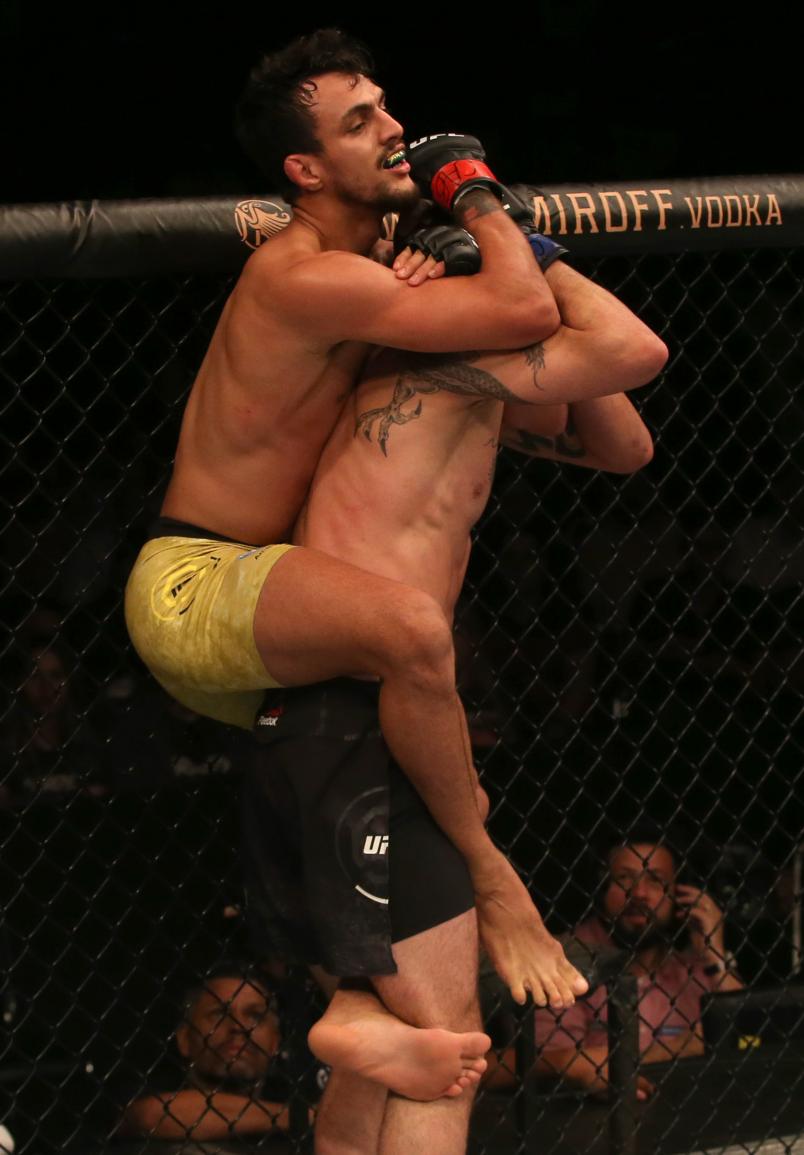 “I feel like it was hard for everybody, and everybody gave their best to get through this pandemic situation,” he continued, unwilling to fixate on what he wasn’t able to do in his last camp, knowing he was far from the only person impacted by the global pandemic. ”I don’t want to say the whole training was not good — I only didn’t get the result that I was expecting; the training camp was good, but here is still better, for sure.”

Things started out favorably last summer on UFC Fight Island, as Ramos attacked with a series of calf kicks and created a scramble a minute in, floating around to Murphy’s back and forcing the British striker to grapple. But with 90 seconds left in the opening stanza, an unnecessary spinning back elbow attempt gave Murphy an easy opportunity to put Ramos on the canvas, and he never made it back to his feet; a string of heavy, unanswered punches bringing the fight to an end 50 seconds later.

Even with a disappointing result, the ever-positive competitor was quick to give credit to his opponent, acknowledge the mistakes he made during the fight, and focus on the improvement he’s made since then as he prepares to finally make his first appearance of 2021.

“Lerone is a great fighter, and he did the best job to beat me,” he said. “I gave him an advantage that I could not give, and I had to pay for that; that’s what happens when we give advantages to our opponents. In this fight, I didn’t have the best strategy and I had to pay for that fault. It was my fault, I learned from it, and I can work on this so that I do better than I did last time. 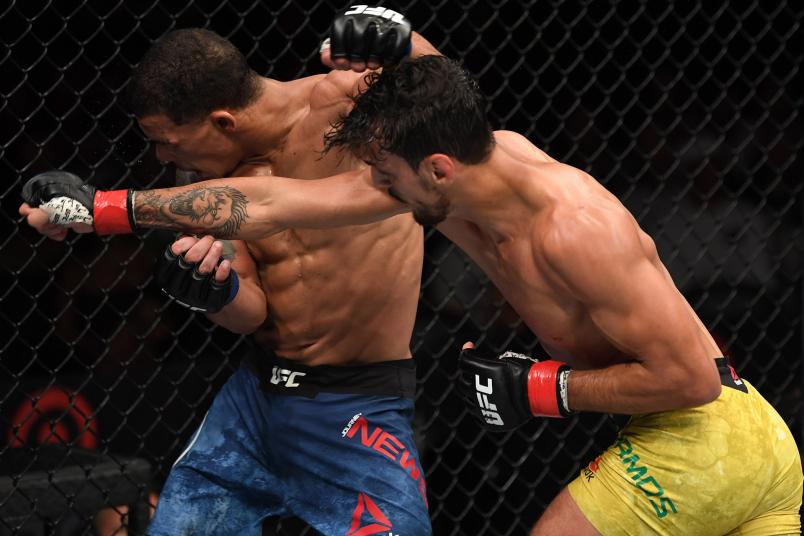 Ricardo Ramos of Brazil punches Journey Newson in their bantamweight bout during the UFC Fight Night event at the Target Center on June 29, 2019 in Minneapolis, Minnesota. (Photo by Josh Hedges/Zuffa LLC/Zuffa LLC via Getty Images)

“I know that a win is really good, but I know that when I win, I can get better, but when I lose, I know why I lost, and I know how much I can improve when I get a result that I wasn’t expected. I’ll always give my best to make sure that never happens again.

“Losing is part of the process,” continued Ramos, who carries a 14-3 record into Saturday’s pairing with Algeo, a Contender Series alum who starred on the rugged East Coast regional scene before getting called up to the UFC last summer. “Some people don’t lose in the cage, but everybody loses at some point in their life. I did in the Octagon and I was not happy with that, but I learned from it and will become better; that’s what fighters do.”

What really underscores Ramos’ “Sunny Side Up” approach to things is that the road to competing this weekend featured a pretty significant detour.

Initially, the Brazilian jiu-jitsu black belt was scheduled to face Zubaira Tukhugov on March 13 as part of the fight card headlined by Leon Edwards and Belal Muhammad. He’d made the trek to Sacramento, rounding out his training camp with the Alpha Male crew, and was getting ready to start tapering things down heading into Fight Week when he got word that Tukhugov was forced to withdraw a week before the event.

A week before he was supposed to compete and finally got the chance to try and put a victory back atop his record, the fight was pulled, momentarily leaving Ramos in uncertain territory. 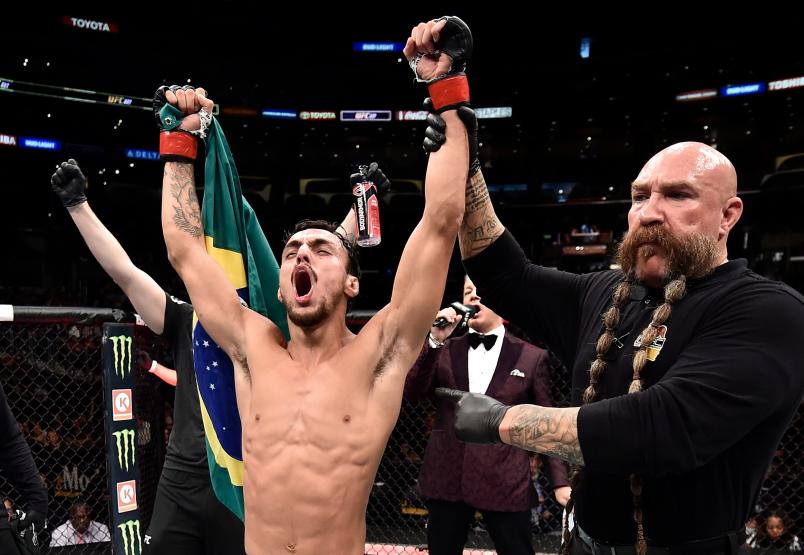 Ricardo Ramos of Brazil celebrates after his split-decision over Kyung Ho Kang of South Korea in their bantamweight fight during the UFC 227 event inside Staples Center on August 4, 2018 in Los Angeles, California. (Photo by Jeff Bottari/Zuffa LLC)

Nine days later, the bout with Algeo came together, and through it all, the ultra-positive Brazilian has only seen the upside of things.

“The last couple weeks have been amazing,” said Ramos, who stayed in Sacramento and remained in camp throughout the last month. “I have been training with the best guys and I feel great; I feel like I’m ready to go at any time.

“With this surprise that we faced in camp, that’s just how life is, you know, and we’ve got to just keep the focus on winning, not on the opponent. I try to see the positive side of things, so I was here for almost a month, then they cancelled the fight, so I had more time to train and work with the guys at Team Alpha Male, and that makes a big difference; that’s good for me.”

One of the upshots of having his 2021 debut pushed back a couple weeks is that Ramos’ fight now lines up with that of fellow Team Alpha Male competitor Alexander Munoz, who is slated to follow Ramos into the cage this weekend when he takes on Ultimate Fighter alum Luis Pena.

“Just being around these guys is really good,” added Ramos, who genuinely loves the camaraderie and overall vibe of training with the long-time elite camp in the California capital. “I have my buddy Alex Munoz that is going to fight on this same card, and we’re working together with Raymond Daniels and a bunch of killers, so it gives me a lot of confidence.

“Every day we are around lions. I feel good and the closer I get to the fight, the more confident I get.

As for the fight itself, Ramos has been impressed with what he’s seen studying tape of Algeo, who earned his first UFC victory with a unanimous decision win over Spike Carlyle at the end of November, but is more focused on simply getting to fight, confident that he’s capable of competing with anyone.

“He’s a well-rounded guy and I’ve been watching one of his fights every day, working on studying his abilities,” he said of the 31-year-old Pennsylvania native. “I feel like it’s a good fight, a good replacement — completely different from the one I was going to have — but I feel good.

“If there is somebody to face, that’s all I needed,” he added. “Doesn’t matter if he’s tall or short — I’ll be ready for him.”