Ricardo Lamas: Surprising Everyone but Himself

"I’ve thought about this fight a million times, and I’ve won it a
million times. And on the 26th, I’m just going to have to
make that dream come to fruition." - Ricardo Lamas 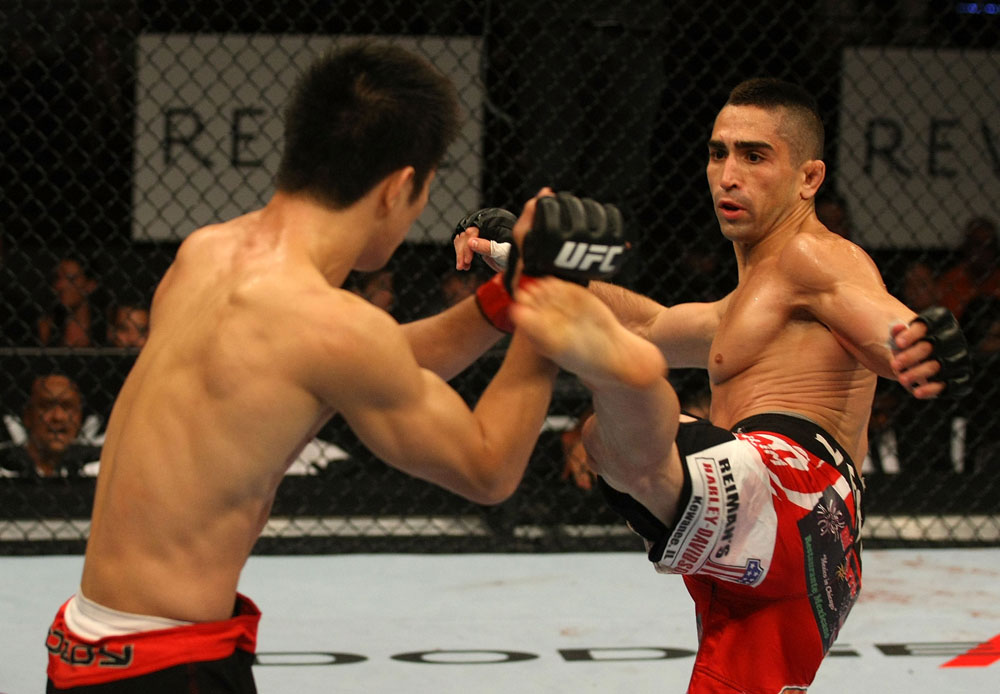 He’s stepped into the cage, heard Bruce Buffer announce his name, and listened to the United Center erupt into a thunderous ovation, cheering on their native son in the biggest fight of his career. He’s heard the referee start the fight, walked to the center of the cage to touch gloves with his latest adversary, and started in on the task of winning his fourth consecutive fight since migrating to the 145-pound ranks nearly two summers ago.

He fought him in the clinch, on the ground, and in space. He’s fought him for a hard five minutes, rested for one, and gone right back into the fray to do it again. He’s gone 15 minutes at a fast pace, being the aggressor, not letting the Duke Roufus-trained 24-year-old find his rhythm.

Ricardo Lamas hasn’t stopped fighting Erik Koch in his mind since the two were officially announced as opponents for this weekend’s UFC on FOX card in Lamas’ hometown of Chicago, Illinois.

“I’ve thought about this fight a million times, and I’ve won it a million times,” explains Lamas, who has vaulted into contention in the featherweight division on the strength of back-to-back wins over Cub Swanson and Hatsu Hioki. “And on the 26th, I’m just going to have to make that dream come to fruition.”

The 30-year-old Lamas, who competed at lightweight throughout his six-fight run in the WEC, has seemingly emerged out of nowhere to be a force within the featherweight division. A little more than two years after losing to Yuri Alcantara in his final appearance at 155 pounds, Lamas has strung together three straight victories to quickly work his way up the ladder in the 145-pound ranks.

Despite dominating Matt Grice in his divisional debut, Lamas entered his bout with Swanson in November 2011 as the underdog. Even after submitting the Brazilian jiu-jitsu black belt and Team Jackson-Winkeljohn standout midway through the second round, few gave Lamas a chance against perennial contender Hioki when they met last June.

Just as he did with Swanson, Lamas surprised fans and critics alike by upsetting the Japanese veteran. The only people who weren’t surprised were Lamas and his team.

“It’s felt really good,” Lamas says of the win over Hioki, “but it’s not something where I want to be the underdog so I can laugh in everybody’s face. When I go in there, I’m expecting to win. It doesn’t come as any surprise to me because I know what I’m capable of doing, and the people around me know what I’m capable of doing. It’s really nice to prove the critics wrong, but really, there’s no surprise on my end because I believe in myself.

“Ever since I started fighting, I’ve taken the underdog role in a lot of my fights. I’m confident there because most of the times I’ve been in that role I’ve come out on top. I’m a pretty mentally confident person. You can’t break me with talk or anything like that. I don’t let anyone else’s opinions about what kind of fighter I am, who I can beat, who I can’t beat get to me. Everybody who knows me believes in me, and that’s pretty much all I need.”

That steely resolve and his three-fight winning streak have carried him into Saturday’s main card opener against Koch, who was slated to fight champion Jose Aldo for the featherweight title at two different points last year, only to have the match scuttled by injuries – one Aldo’s, one his own – both times. The winner will likely be next in line to fight for the title, an implication that could ratchet up the pressure, but doesn’t, because Lamas was already viewing this fight as the biggest of his career for other reasons.

“Whether I would have been fighting for a #1 contender spot or coming off a loss, fighting at home makes it one of the biggest fights of my career because I just haven’t done it in so long,” explains Lamas, who last fought in Chicago in November 2008, his final bout before entering the WEC.

“Some people might see (fighting at home) as a negative because they’ll feel like they have a lot of pressure to perform in front of family and people that they know, but the more people that are there who know me and are supporting me, the better I’m going to do.

“I don’t really see any downside to fighting at home. I think I’m going to be more comfortable there. I’m going to be surrounded by people I’m comfortable with, and I’ll have the choice to sleep in my own bed,” he adds with a laugh. “If the UFC doesn’t need me – if I don’t have any interviews or I have the day off – I probably will go home and sleep in my own bed, but the night before the fight, I’ll stay at the hotel so I can sleep in, and not have to worry about driving downtown or to wherever we’re staying.”

Saturday’s contest brings Lamas’ career full circle, delivering into the cage in his hometown at the highest point of his career.

For “The Bully,” it’s validation that everything he’s poured into the sport over the last five years has been worth it, and a chance to announce himself as a legitimate title threat on national television. As has been the case throughout his career, the Elmhurst College graduate isn’t allowing himself to get caught up in the moment or think about anything other than the task at hand.

“It feels like all the hard work and everything that I’ve put into it is starting to pay off,” admits Lamas, who has pushed his record to 12-2 with his three victories inside the UFC cage, “but it’s something that I don’t let get into my head at all. I train even harder now, and I don’t look past anyone I’m fighting.

“I think that has been one of the keys to the success I’ve been having. I’m not thinking, ‘If I win this, I get a title shot.’ I’m just keeping my mind focused on this fight, and what happens afterwards will happen. A lot of people will look past a fight because of what could happen afterwards, but I’m really just 100-percent concentrating on Erik Koch.”

It has been that way since the fight was announced back in November.

Koch has been out of the cage since defeating Jonathan Brookins in September 2011, an injury bumping him from a UFC 143 matchup with fellow prospect Dustin Poirier prior to his championship dalliance with Aldo being postponed, and then ultimately cancelled.

Despite having been sidelined for more than 15 months, Lamas isn’t counting on ring rust to slow “New Breed” down on Saturday night when the two share the cage at “The Madhouse on Madison.” He also expects there to be a very vocal pro-Koch section in the United Center as well.

“He trains in Milwaukee, and I’m expecting the stadium to get pretty rowdy during our fight,” admits Lamas. “I’m fighting in my hometown, but he’s not from too far away. It’s going to be constant action, and the person who comes in better prepared is going to come away victorious.

“I think pushing the pace is my natural style, whether I’m fighting somebody coming off a long layoff or not. I really work hard at my conditioning and my cardio so that I can go for the entire fight. He has had a long time off, but he’s still been training, so he could have picked up some new things that we haven’t seen yet that he’s been perfecting while he’s been out.

“I’m expecting the best Erik Koch that we’ve seen out there; that’s what I’ve been training for. He’s a very dangerous fighter; a really young, talented guy. In the future, I’m sure he’s going to do great things, but I’m also a talented fighter, and we’re going to get in there and let it all go.”

Just as he’s envisioned the fight a million times, Lamas has seen himself winning every time. Saturday night, he plans to make that dream a reality, and replace the misery of another long, grueling training camp with the euphoric feeling that comes with standing victorious in the center of the cage.

“When you win a fight and your hand is raised, it’s a very hard feeling to explain. It’s one of the most gratifying feelings that I’ve ever felt. It’s just all the hard work that you’ve put in – we train for 8-10 weeks for 15 minutes on one night, and we have to be on our game. Winning that fight makes everything you went through worth it.

“As soon as you get the win, you feel like you could go through another training camp right out of the gate. It makes everything feel worthwhile.”