Ricardo Lamas Is Scared Of No Man

It doesn't matter who is standing across the Octagon from him at UFC Vegas 8, Ricardo Lamas just wants to test himself.
By Thomas Gerbasi, on Twitter: @TGerbasi • Aug. 25, 2020

When Ricardo Lamas was offered a fight with Octagon newcomer Bill Algeo after his scheduled opponent for this Saturday’s UFC Fight Night card in Las Vegas – Ryan Hall – withdrew from the bout, he didn’t blink.

He never does. And why would he? Over 16 fights in the UFC, Lamas has faced a Who’s Who of the featherweight division, from champions Jose Aldo and Max Holloway to perennial contenders Cub Swanson, Dennis Bermudez and Charles Oliveira, “The Bully” has seen it all. He’s lost some, he’s won more, and along the way he established himself as one of the best 145-pounders of this era.

So yeah, he’s not going to be intimidated by any opponent.

“I've been around a long time, I've fought a lot of people, I've fought for the title,” he said. “There's no reason to be scared of another man. I don't care who it is. They could match me up against whoever; I'm there to fight and I'll fight anyone.”

So Algeo it is. But before we move forward, as a testament to Lamas’ willingness to take on all comers, in his original opponent, he was going to be in with a jiu-jitsu ace not a lot of featherweights were lining up to face. So why did he sign up to battle Hall? 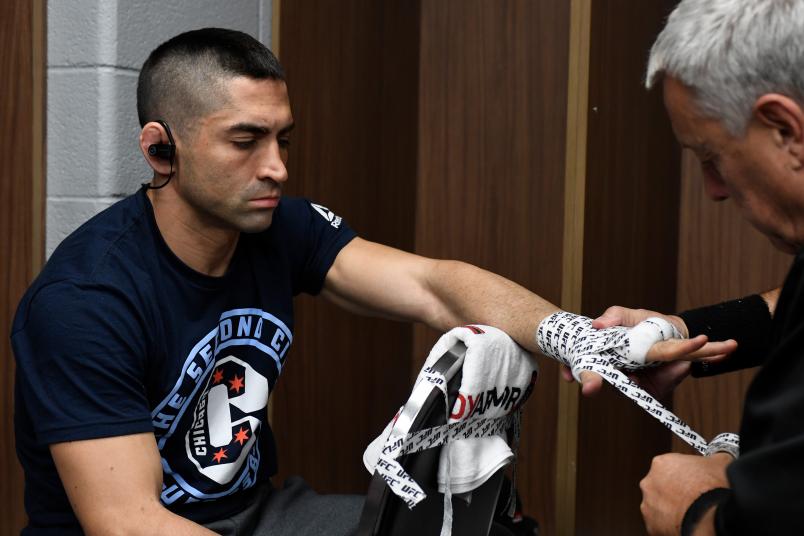 Ricardo Lamas has his hands wrapped backstage during the UFC 238 event at the United Center on June 8, 2019 in Chicago, Illinois. (Photo by Todd Lussier/Zuffa LLC via Getty Images)

It isn’t convenient losing an opponent on short notice, but that’s where Lamas’ experience comes in, and after a solid camp with the MMA Masters squad in Florida, he is truly ready for whoever is put in front of him.

“I feel I get the best prepared down here, so we've obviously been careful,” said the Chicago native, who has been a longtime advocate of supplementing his work at home with visits to the Sunshine State. “I've been doing a lot of one-on-ones with my coaches and my coaches have been in and out of Vegas, cornering guys, so they've been getting tested for COVID left and right, and everything's been good so far, knock on wood.”

The 38-year-old Lamas’ spirits are high heading into his 28th pro bout, and rightfully so, since he’s put a loss in his last fight against Calvin Kattar last June, jaw surgery, and the temporary closing of his UFC Gym Naperville due to the COVID-19 pandemic in the rear view mirror. So while the two fights per year schedule he was keeping over the last several years got interrupted, he did get time to get healthy and back to business.

“From the last injury I suffered, I was out for a while and had to get surgery on my jaw,” he said. “After that, I was just really focusing on the gym and my business, and then COVID hit. So I would have fought in less than a year since the last fight, but I just took some time off and I wanted to make sure that my jaw was a hundred percent fully healed before I got back into a training camp and really going a hundred percent with the training. I feel like I did that, and now I'm ready to go.”

As for the gym, which Lamas opened in May 2018, COVID shut it down for 70 days, but now it’s almost business as usual.

“It was stressful, just kind of taking it day-by-day,” he said. “We didn't know what was gonna happen or where we were gonna go but thank God we survived and we're doing good now. We're just looking to keep it going and keep expanding the gym.”

Once Lamas takes the gloves off for the last time and walks off into the sunset, he will have even more time to focus on his gym, and even though fighting is first now, he knows it won’t always be, and preparing for the next chapter is an important lesson for the younger generation of fighters.

“It's extremely important,” he said. “It's the exact reason why I found a good support team and good partners and opened up this gym. I didn't know how much longer I was gonna be doing this. I tend to go fight-by-fight and listen to my body, and I've been feeling good and doing well so far, but you always have to have something on the backburner ready to go. I didn't want to wait until I retired to start this gym, so that's why we opened up in 2018 so I could just flow into this as soon as I'm ready to hang the gloves up.”

Lamas isn’t ready yet, though. In fact, he feels better than ever as he approaches the big 4-0.

“I'm feeling good,” he said. “Honestly, for this camp, I don't think I've ever put in as much work as I have. My weight is better than it's ever been. I look better now at 38 than I did when I was 28. My body's feeling good and I'm starting to get the whole recovery routine down to make my body last a little longer. We're always about training hard, but we're never about recovering. So if you don't have that balance, then you're gonna burn your body out.”

So we can expect to see him back again before the end of the year?

“It's definitely a possibility,” he laughs. “If I come out unscathed with no injuries and good to go, then I could definitely look to make a quick turnaround.”