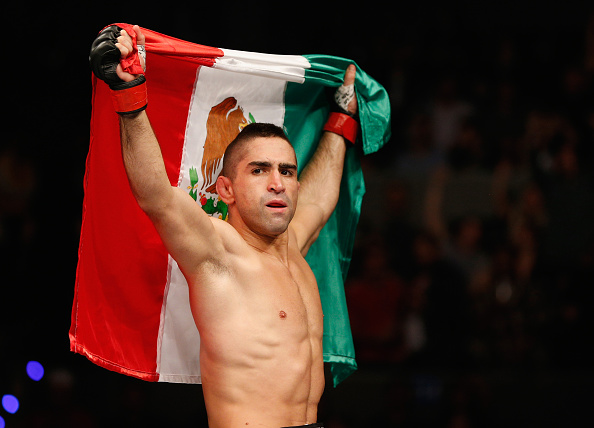 Ricardo Lamas is done being stressed out and that’s bad news for those unwitting souls that happen to sit down with the UFC featherweight and undercover cut-up. Arriving at this point has been a process for the 32-year-old contender, one that began in 2014.

Coming off a second-round stoppage win over Erik Koch, Lamas lobbied for a title shot, but was ultimately paired with “The Korean Zombie,” Chan Sung Jung, in a bout to determine the No. 1 contender. Three weeks before the fight, Jung was pulled from the matchup and paired with champion Jose Aldo, while Lamas was left on the sidelines without a dance partner.

While he’d eventually get his long-awaited title shot at UFC 169, Lamas went a year without a fight and missed out on the opportunity to claim championship gold, losing a unanimous decision to the dominant Brazilian titleholder.

“Coming out of the title fight, there was a lot of stuff going through my head after that loss and I kind of sat back,” Lamas begins, pausing to find the right words. “That whole year before was really stressful on me – I was so close to getting a title shot. I was really trying to fight for it and I had a fight cancelled on me.

“It was over a year where I didn’t have a fight. It was very stressful and after the fight (with Aldo at UFC 169), I just kind of sat back and realized that this isn’t something that should be stressing me out. This is something that I should be having fun with because I don’t know how long I’m going to be able to do this and, right now, I’m living my dream.”

Following a bounce-back win over Hacran Dias in June, Lamas carried that “have fun with this” mindset into his UFC 180 assignment opposite Dennis Bermudez.

After years of speculation about the UFC hosting an event in Mexico City – and Lamas enlisting his brother and manager, Frank, to constantly badger UFC matchmaker Sean Shelby about said rumors – the organization made their debut in the Mexican capital last November and Lamas’ inclusion on the card was a dream come true.

Bermudez entered the bout on a seven-fight winning streak and despite being just a single bout removed from challenging for the UFC featherweight title, Lamas was installed as the underdog. A little over three minutes into the opening round, he rewarded those that backed him at the betting window, catching the former Ultimate Fighter finalist in a deep guillotine choke that brought the New Yorker’s run of success to a screeching halt.
> Watch Ricardo Lamas vs. Dennis Bermudez on UFC FIGHT PASS

The victory cemented Lamas’ standing as one of the top fighters in the 145-pound ranks and set him up for another marquee matchup.

“Coming off that win, I knew it was going to be one of two people they were going to put me up against,” Lamas, who pushed his record to 15-3 with his submission win over Bermudez late last year, admits. “I knew it wasn’t going to be enough to get me another title fight, but I knew it was either going to be Frankie (Edgar) or Chad (Mendes), so when they came to us with the opportunity to fight Chad, I wasn’t surprised.” 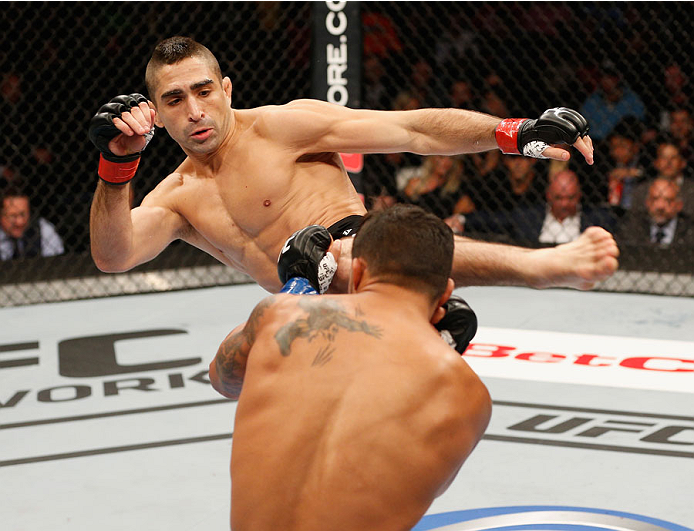 After the bout was announced, the duo was dispatched to make the media rounds and Lamas saw the repetitive inquiries of the good-intentioned interviewers as an opportunity to have a little fun with his answers.

“We got asked the exact same question every single interview and we did so many interviews that I just started coming up with stupid scenarios every time about what we did the night before,” Lamas laughs, admitting that Mendes was in on the ruse. “It started off that the UFC was making us sleep in the same room and then grew from there.

“I told one interviewer that Chad’s favorite movie was The Devil Wears Prada and he made us watch it one night because he’s a huge Meryl Streep fan. The guy believed us and put it in his article. I guess I’ve got a good poker face.”

Media obligation fun behind them, the Top 5 tandem square off this weekend in the main event of the UFC’s return to Fairfax, Virginia, in a bout that could establish the winner as the best fighter in the division outside of its champion.

While Lamas enters off one of the biggest victories of his career, Mendes heads into the headlining assignment coming off the second loss of his professional run, both of which have come in championship opportunities against Aldo.

Though the Team Alpha Male standout had his moments and exorcised some of the demons that lingered from his first loss to the Brazilian champion in their second meeting, Mendes was still on the wrong side of the result in the sequel. That being said, it’s hard to fault a fighter that is 16-0 against everyone other than the top featherweight in the world, and Lamas believes the winner of their Saturday showdown should be next in line to fight for the title. 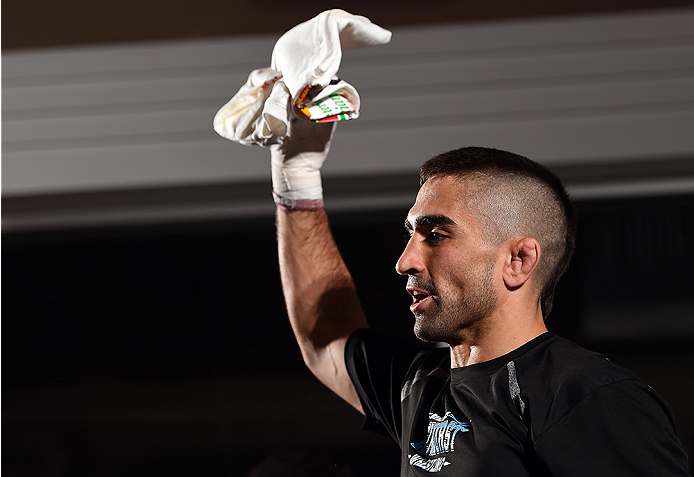 “He’s at the top of the division right now; the only one above him is Aldo,” Lamas says of Mendes. “He is ranked as No. 1 out of all the contenders, so besides a title fight, this is the very best fight I can have, so I’m going to take advantage. This is going to be the true No. 1 contender fight.

Whether or not that happens remains to be seen, but for Lamas, he’s simply enjoying the ride and making the most of the opportunities being presented to him.

“These are two great opportunities that I’ve had back-to-back – fighting on the very first card in Mexico and now I’m going to be headlining my first UFC card, so I just want to enjoy it. These are going to be memories that stick with me forever and I want them to be happy memories, not stressful ones.”
> Check out the full UFC Fight Night: Mendes vs. Lamas fight card