Ricardo Lamas Has Seen It All

One Of The Great Featherweights Of This Era Looks Back On His Rise
By Thomas Gerbasi, on Twitter: @TGerbasi • May. 22, 2020

Whether challenging Jose Aldo for the featherweight title, headlining an event against Chad Mendes, fighting in locales such as Buenos Aires, Mexico City and Winnipeg, or just competing against some of the best 145-pounders of this era, Ricardo Lamas has seen it all over the course of his 12-year pro career.

But he’s never forgotten those days when he had to warm up for a fight in a coat closet in the cafeteria at the local electrical workers’ union hall. Back then, the former Elmhurst College wrestler assumed things would get better.

They didn’t. For his next fight in the same hall, the closet was locked, forcing him to warm up in the crowd.

He was hooked, though, and it did get better for “The Bully,” who was fighting for a regional title in his second pro fight in 2008 against local favorite (and fellow wrestler) Cal Ferry.

“This guy was undefeated, a big D-1 wrestler and I was a D-3 wrestler,” recalled Lamas. “I was fighting in his hometown, so I was in enemy territory. I remember people swearing at me on my walkout to the cage and stuff like that. (Laughs) And I went in there and finished the guy in the fourth round. Then the entire arena emptied out except for the little section that I brought with me.”

Fighting a bout scheduled for five rounds just two fights into his career was pretty wild stuff but par for the course back then. Taking on 31-11 Bart Palaszewski on four days’ notice less than a year later was a little wilder. But Lamas didn’t blink when offered the chance to make his WEC debut on March 1, 2009.

“Going into that fight, I had five pro fights and only three amateur fights,” he said. “So I was under 10 fights total and Bart had over 40 fights. But it wasn't a situation that I wasn't in before. Coming up, even before the WEC, I had fought guys that had over 40 fights and I had like two pro fights and I ended up beating them. So mentally I was prepared for it because I had been there before. And I always took things fight by fight. I wouldn't try to look ahead or anything and I just tried to be in the moment every time.”

But this was the WEC, which at that time was THE place for lighter weight fighters. Sure, the UFC had the lightweight division that Lamas was still competing in, but he likely wasn’t going to get the call to the Octagon with five fights. So this was not just the next best thing; it was a place Lamas wanted to be.

“When I made it into the WEC, that was my big show,” he said. “I was a big fan of the WEC. Obviously, I got into this whole mixed martial arts thing because of the UFC. I've been watching UFC since I was 10, 11 years old, but when the WEC came around, I started getting into that and watching that whole organization. Urijah Faber was the poster boy for that, and I was a big fan of his when I started my MMA career. And when I got the call to make it in there, it was almost the same thing as making it into the UFC because it was owned by the same company already. It was all the same people, all the same behind the scenes stuff, and I thought it was awesome. It really showcased the lighter weight fighters.” 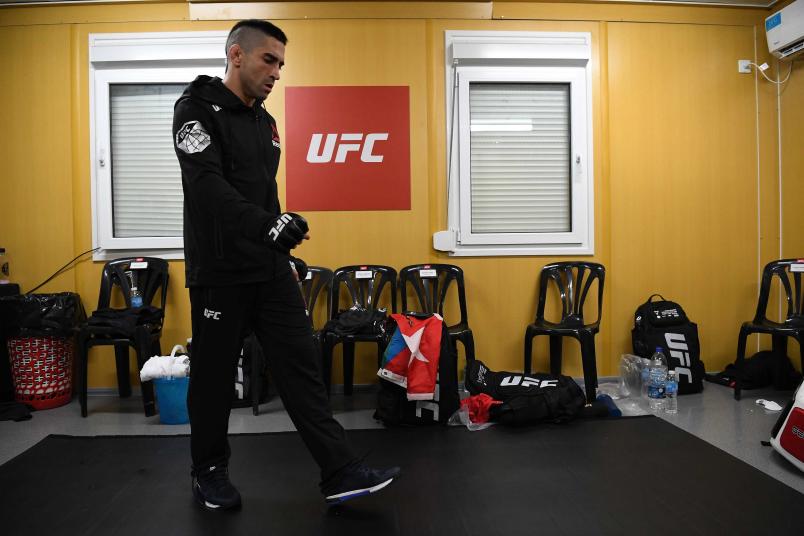 Those lighter weight fighters found a home in the blue cage, and with Zuffa taking over the promotion, along came greater visibility, a TV deal, and the opportunity for these fighters to reach an audience they never did in the United States before. Lamas was now a part of this. All he had to do was beat a legit contender on less than a week’s notice.

“Normally when you book a fight and you have eight to 12 weeks to prepare, you're spending every day thinking about that fight and thinking about that opponent,” he said. “I had four days to do that (Laughs), so I jumped in and I had to sink or swim right away. It was cool that it happened that way because who knows how I would have performed if I would have had 12 weeks to worry about that huge fight coming up against a veteran like Bart Palaszewski. I truly believe things happen for a reason and I'm glad that things happened the way they did.”

Lamas upset Palaszewski via unanimous decision and he was off and running. There would be ups and downs over the course of his six-fight stay in the promotion, but one thing was a constant: he was fighting killers every night, from Palaszewski, Danny Castillo and James Krause, to underrated talents like Bendy Casimir and Dave Jansen, as well as Brazilian contender Iuri Alcantara.

And by the time it was announced that the WEC was going to merge with the UFC in 2010, Lamas was not only going to go to the big show, but he was going to do it as a featherweight.

“It was something I was contemplating for a while because in college I wrestled at 157 pounds,” he said. “That was when we had one hour between weigh-in and competition time, so it didn't take me long to refuel and get back to feeling good to compete, and the cut wasn't that bad at all. I would diet during the week, and then Friday, Saturday, Sunday, I was able to pretty much indulge in whatever kind of foods I wanted to eat. I thought if I really cleaned up my diet, I could probably drop to 145 in a healthy way and compete pretty well there, so that's what made me decide to make the drop because when the WEC merged with the UFC, I had a long layoff, so I was getting down slowly and picking up my cardio and fixing up my diet and brought my weight down gradually.” 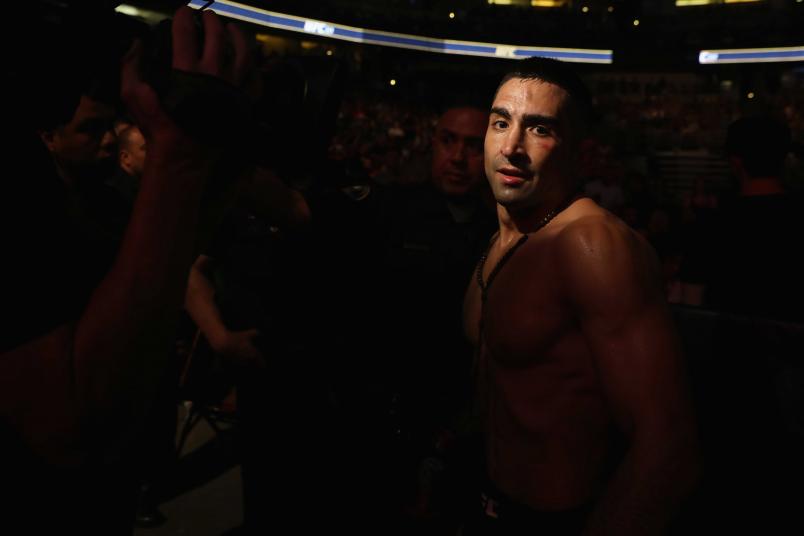 Ricardo Lamas walks out of the Octagon after his featherweight bout against Jason Knight during the UFC 214 event at Honda Center on July 29, 2017 in Anaheim, California. (Photo by Christian Petersen/Zuffa LLC)

You could insert “and the rest is history” now, as Lamas went on to become one of the best featherweights of this era while still being a force in the division as he turns 38. But he hasn’t forgotten his history, especially the time being in the blue cage of the WEC.

“I get nostalgic about my entire career from the beginning, and even the portion when I was working my way up to the WEC,” he said. “Stuff like that, memories of being that young, hungry fighter working towards the big show and then getting into the big show - and that was the WEC for me.”

It’s a good bet that any fighter who competed in the WEC feels the same way about the promotion as Lamas does because while they were under the same umbrella as the UFC, they also felt a healthy rivalry with the big show.

“It was really the only opportunity the lighter weight classes had to showcase their talent and let the whole world know that hey, we're here and we're just as good as the UFC,” said Lamas. “And you saw that. When WEC merged, how many guys from the WEC became UFC champions and some of the biggest names in the UFC? There were a ton. So the talent pool in the WEC was gigantic and I think that the UFC realized that and that's why they decided to merge us together.”

“WEC had almost like a cult following,” he said. “And it was cool to be a part of that.”