Ricardo Lamas: The Future is Now 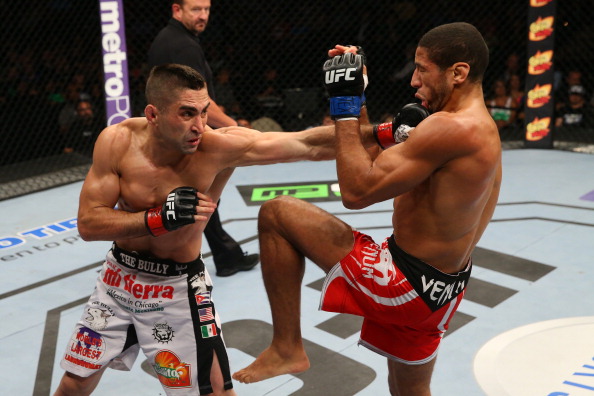 Whenever people join the workforce, the mindset is generally the same whether you’re in finance, filmmaking or fighting: go to work, put some money in the bank and build for the future, often with an eye towards having a family and setting your future children up so they don’t have to work as hard as you do once they get older.

Over the last year, that “plan for the future” approach became Ricardo Lamas’ reality. In February, the featherweight standout tied the knot with his girlfriend Olivia and in June, the couple welcomed their first child, a son named Abel.

“It’s all great; I love it, man,” the new father and husband exclaimed. “Married life is great and the little guy is definitely keeping me busy and on my toes. I’m enjoying every second of fatherhood.

“We beat up our bodies day in and day out and some days you wake up and you don’t want to go to the gym,” the 33-year-old contender continued. “On those days, I look at my kid and I drag my ass to the gym because it’s what I’ve got to do to provide for him. I’d cut my wrists for this kid and I want to give him the world, so it pushes me to train even harder.”

For many fighters (and people in general) the arrival of a child brings a new perspective on life – a realization that the elements of life that seemed so important for so long come a distant second now that there is a child in this world relying on you to provide for them for the next 18-21 years.

But Lamas has never been one to get bogged down in the ebbs and flows of life as a professional fighter, having always taken his triumphs and setbacks in stride and focusing on the bigger picture.

“I love fighting, I love my career, but fighting isn’t life,” Lamas offered, as he comes off a first-round knockout loss to Chad Mendes in April. “There is a lot of stuff outside of fighting that makes me happy and obviously my kid is at the top of that list.

“I know how to deal with the losses – I’ve had losses before in wrestling and I know how to bounce back from them; it’s not something I’m worried about. I know that I’m going to get back on the winning track and that’s the most important thing - to keep my head up, keep moving forward and keep training.”

The former title challenger gets the chance to get back into the win column this weekend when he welcomes the first man to be crowned The Ultimate Fighter, Diego Sanchez, to the featherweight division in the co-main event of Saturday’s UFC Fight Night event in Monterrey, Mexico. It marks the second time Lamas has traveled to Mexico to compete, having earned a first-round submission win over Dennis Bermudez at UFC 180, and it comes with an added bonus for “The Bully.”

“My mother is from Monterrey and I still have family there, so I’m going to feel like I’m at home,” explained the Chicago native, who picked up one of the biggest wins of his career in front of family and friends when he stopped Erik Koch midway through the second round at “The Madhouse on Madison” in January 2013.

“It’s not like it’s my immediate family that is in Monterrey – it’s cousins of my mother and family members that I met for the first time on the last press tour that we did, so it’s cool to connect with those people that I probably wouldn’t have had the chance to connect with without fighting in the UFC, so I’m grateful for that. It has helped me establish new relationships with my family and I’m really looking forward to it.”

He’s also excited about sharing the Octagon with an action fighter like Sanchez, one of the longest tenured competitors on the UFC roster who hasn’t fought since earning a highly controversial split decision victory over Ross Pearson in his hometown of Albuquerque, New Mexico nearly 18 months ago.

Despite shifting divisions throughout his career, Sanchez’ style has never changed. He’s always been a high energy, high output fighter who comes forward, and Lamas is expecting no different on Saturday. Of course, he’s also acutely aware that for one reason or another, the officials charged with scoring the fights have a strange affinity for Sanchez’ style, resulting in “The Dream” coming out on the happy side of a few decisions that many thought should have fallen in his opponents’ favor instead.

Combine that with the fact that Lamas is eager to start rebuilding after getting stopped by Mendes last time out and you understand why the proud new father has no intentions of letting this one go the distance in Monterrey.

“With an opponent like Diego Sanchez, we’re not going to disappoint the fans. Diego is a real exciting fighter – he’s a veteran of the sport, he’s put a lot into the sport and I’ve enjoyed watching a lot of his fights, so getting the chance to face him definitely intrigued me.

“This fight is really important,” Lamas continued. “Every time you’re coming off a loss, you have to reinvent yourself and rebuild yourself, re-prove yourself to everyone. Also, some of his last fights were very questionable when they went to a decision, so a huge thing for me is to finish this fight.

“Those judges love him, so I don’t want to leave it in the judges’ hands – I want to finish this fight and I want to have control of the outcome because you never know.”