Reza Madadi: The Mad Dog is Back 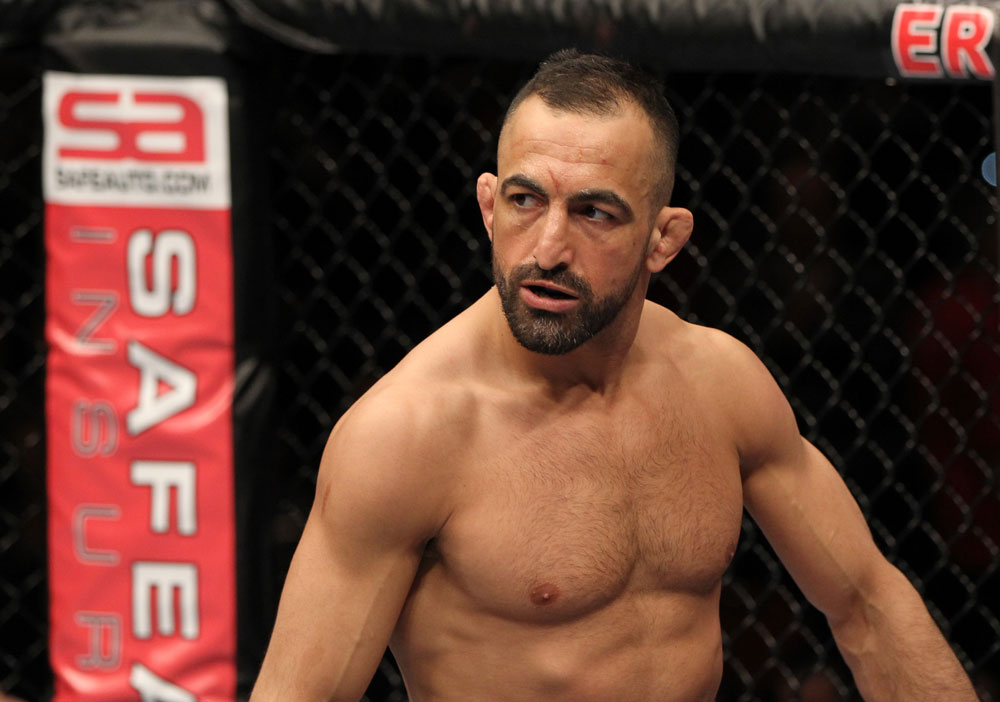 No one really looks forward to fight week. There are endless media obligations, a new environment to get used to for a few days, and the always miserable weight cut. And this is before a fighter gets to step into an Octagon and have someone try and punch him in the face for 15 minutes.

Just don’t tell Reza Madadi that he’s supposed to dread his time in Dublin as he awaits his Saturday bout against Norman Parke. In the past, he may have been one of those people hating the lead-up to fight night, but this time around, which marks his 17th time going the process, everything has changed.

“Even when I take a cup of coffee in the morning, I enjoy it a hundred more times,” Madadi said. “You can’t understand how much I appreciate everything. Before, it was ‘ah, whatever.’ But life should be like this. Things can change over one night, over one second, over one minute.”

“I left my home and my wife was sleeping,” he said. “I want to kiss her, but I said ‘no, it’s okay, I’ll be back in one hour.’ I came back after a hundred days. So the really, really small things, I appreciate them. I’m in heaven right now.”

It’s a far cry from the hell of that period in 2013 and every other day he spent in prison in his adopted home country of Sweden for aggravated burglary.

“The penalty I got was so high,” he recalled. “My sentence was something unbelievable, and I told them all the time, I didn’t do what you say I did. But in the end, they gave me 18 months in prison.”

Convicted of playing a role in the theft of $150,000 worth of stolen goods from a designer handbag store, Madadi saw his life and career ground to a halt. He was fresh from the biggest win of his career, a Submission of the Night victory over Michael Johnson in Stockholm, and a month later, it was seemingly all over. While still protesting his innocence, Madadi served nearly a hundred days before appealing his guilty verdict and getting a second trial. He was found guilty again and served 14 months before his release in March. In between the two stints behind bars, he found out who his friends were.

“That was one of the most important points in my life,” he said. “I was in custody for 96 days. Then the judge released me to wait for the next day in court. When I came home, I saw the support from my teammates, all the guys from AllStars, my coaches, my management team, Alexander Gustafsson. All of those guys and my family, they gave me so much support and they said ‘Reza, we believe you. You will come back stronger than ever.’ Your family, your friends, the people who love you, they mean everything.”

That support was all that kept him going as he counted the days to his release. He was cut from the UFC, and for someone closing in on his 40th birthday, the idea of fighting again when he got out was only a dream.

“It was so hard to motivate myself to come back, but what can I say?” Madadi said. “I couldn’t just hang up my gloves. I wanted to give it one more chance.”

Not that he expected to compete on the sport’s biggest stage again.

“It was so far away and it was so difficult to get back after everything I had been through, so honestly, no,” he said when asked if he thought he would return to the Octagon.

Madadi never lost hope though, and as time marched on, he did his best to stay in some semblance of shape.

“When people read that ‘Mad Dog’ was behind bars and was in prison, they think that I just lay down and not do anything,” he said. “But I worked hard every day and every little opportunity I got, I used to train. I did everything in my power. And when they released me, I started to work three times every day. The guys in my club, they can tell you. I worked so hard, and in six months, I started to realize that I’m there – I’m ready to go.”

In June, Madadi was re-signed by the UFC, and he will make his return Saturday against Parke. Words really can’t capture how he feels at the moment.

“I’m so grateful and I appreciate it so much that the UFC gave me a new opportunity, so it’s good to be back.”

But can he pick up where he left off with the win over Johnson and make a run in the notoriously tough lightweight division at the age of 37? There is no hesitation in his response, proving that the “Mad Dog” is most certainly back.

“A lot of people talk about my age,” Madadi said. “Your warrior heart has nothing to do with age. Your age is just a number. All my life, I’ve trained hard and been focused. I want this so much and I have the same goals I had when I was 25 – I just want to be the best. But each time I’m more motivated, and I want it more than ever because I have so much to show and so much to prove to the haters and to the people that love me and have been there for me.”

He pauses once more, referring back to a time in his life that he would like to forget, but that did change him forever.

“I was so motivated because I read so much s**t about me,” he said. “I told myself you must keep going. Show the world, show everybody that you can come back.”