The days of viral backyard fight leagues appears to be a thing of the past. A fun footnote in the history of combat sports. While a microscopic percentage of the men turning a few hundred dollars a fight into a career of mixed martial arts, what are the men who didn’t make it? What are the men who fought the established men in the “footnote” days of their career?

ICE security guard, Reynaldo Fuentes, was moonlighting at a Miami club when Kimbo Slice and his entourage came in for a night. When a mutual friend introduced them, the brief interaction passed, and the night went on. Back to work that night for Fuentes before he went back to work the next day as well.

While it appeared like just another night of working with VIP clients in the club an impression was made and a two week game of telephone was played that ended with a mutual friend relaying a proposition for Rey.

“Everything was presented to me as simple as, ‘you want to make some money fighting?’” Rey recalls. “I didn’t know anybody’s name. I just knew there was going to be two opponents so when I went there, I was mentally prepared to fight more than one person.”

Showing up mentally prepared to fight two people was a good start and nothing Fuentes hadn’t done before. In fact, online, there still lives footage of “Ray” taking out one man and then another with relative ease. However, that day, in his second fight, his best was not quite good enough when Fuentes found himself going toe to toe with a kid in baggy jean shorts, high top Nikes and a ponytail named Jorge Masvidal. At the time, Masvidal had already had a handful of sanctioned MMA fights and with success already to his name, odds were stacked against any opponent in the concrete Octagon.

Fuentes found himself circling away, eating punches and landing some of his own but was outclassed until endurance caught up and the fight was called. There was no danger of a knockout, no leaking cuts, just an empty gas tank.

It was Fuentes’ first organized fight loss. With no knowledge of Masvidal’s established fight career with multiple wins in multiple promotions, Fuentes gladly took a rematch with Masvidal this time with a little more motivation.

Rey held a rare, structured fight camp for his rematch with Masvidal. For the next two months it was work all day, train in the afternoon. Even when the stakes are low, Fuentes saw an obstacle in front of him he knew he could overcome. 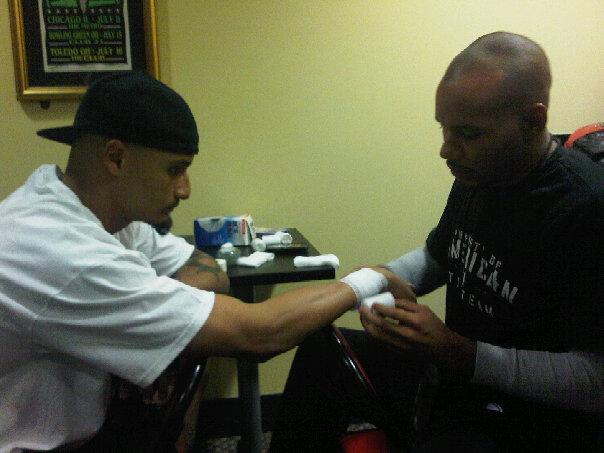 Fight day came, Jorge walked into the backyard with hands wrapped and the ponytail in. Fuentes gave Masvidal a different fight than he saw the first time even knocking him down at one point. When Masvidal stood back up after a few extra seconds on the ground, Fuentes saw the beginning of the end. The gas tank was beginning to empty and with every missed punch, he was bogging down.

Fuentes came up short twice against Masvidal. Masvidal was a fight away from a Strikeforce debut and had already notched four TKO/KO finishes but never landed one on Fuentes.

Fuentes felt the full wrath of a professional mixed martial artist in those fights. The man who reached heights higher than even Kimbo Slice, himself was dropped in front of him as if he was just another man. For $500, he fought a man who would headline UFC London, steal the show at UFC 239 with a record setting knockout and fight for the BMF title in the main event of UFC 244. It could only get better from here.

Fights started going so well that working for the ICE and at a South Beach club was now also splitting time with a fight career.

“After I fought Jorge the second time, I actually got into training a bit more seriously and I basically ran through the next two guys,” Fuentes said. “I started training with American Top Team. I was there a year and a half and not too many people know I went pro, but I did fight at the Hard Rock at Rock n’ Rumble.” 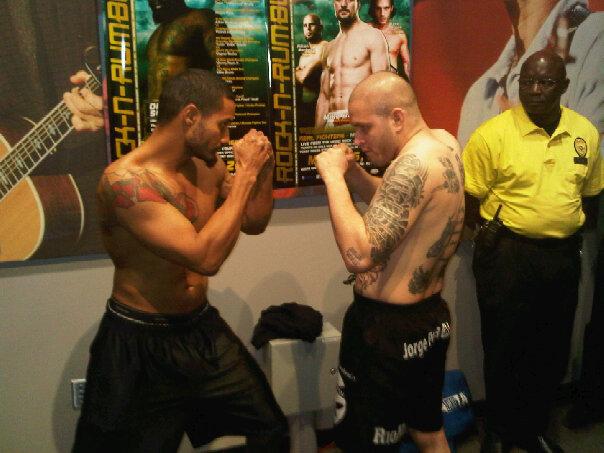 Fuentes led off the card that would also serve as Dada 5000’s MMA debut with a TKO finish in the first round. On film fights, Fuentes now stood at 10-2, professional fights, 1-0. His American Kempo background, love for fighting and love for money was all coming together but still, all good things must come to an end.

“I took it to the pro level I just didn’t continue doing it,” Fuentes explained. “You get injured a lot during training and it just didn’t weigh out to me, money-wise. I had other things going on so I basically kind of shied away from it.”

Jorge would eventually become a mainstay at the pinnacle of the MMA world. Rey continued putting in his time working security. It seemed that inflicting harm on each other for a few hundred dollars would be the extent of their relationship until they crossed paths again at a Miami mall. One man in the UFC, one man a security guard he fought back in the early days of YouTube.

“There was a shopping center in Kendall Mall where I first ran into him after our fight,” Fuentes said. “When I saw him, I was coming out of a supplement store, I think. I can’t remember that well but when I saw him, I was with my son and my son’s mother, he was with his daughter, it was like a family thing that day. I basically called his name. I was like, ‘Hey! Jorge!’ and he looked at me and he was like, ‘Hey, Rey! What’s up?!’ When I saw him that day and we shook hands it was just good energy. Nothing was even weird for one second. I was really looking forward to that moment.”

Today, Fuentes is a 40 years old father, out of the fight game. The man who sent Jorge Masvidal to the ground still goes to the same ICE job every day and enjoys the same life he always has. There’s no bitterness, no disdain and no jealousy. One of his favorite fighters is Jorge Masvidal and Fuentes doesn’t even mind the fact that some will always see him as, “the guy who Jorge beat in the street fights.”

“I want to say the first three or four years of having that on my shoulders it bothered me but like with everything, time heals,” Fuentes said. “I learned to let it go. It wasn’t something that haunted me. It hasn’t haunted me forever, but I basically manned up and owned what it was. I don’t see it in a negative way anymore. A loss is a loss. I don’t see it as a bad thing. I’m actually proud of how well I did. I feel like he and I brought that to the world and it’s history.”

Don’t miss UFC 244 Saturday November 2 and relive all of Masvidal’s fights from the UFC, Strikeforce and HooknShoot ONLY on UFC FIGHT PASS!