Revisiting Griffin vs. Rua I

What's the big deal about the rematch between Forrest Griffin and "Shogun" Rua at UFC RIO? Read below to find out... 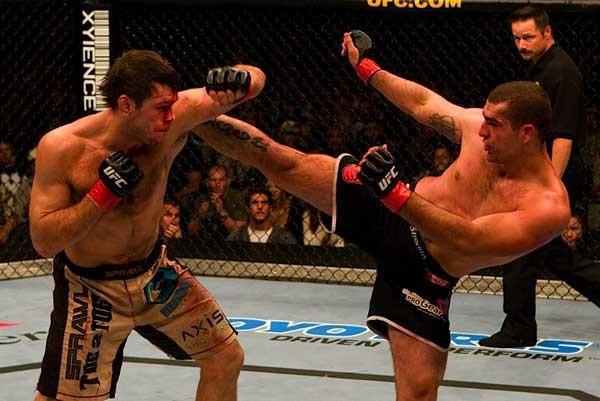 A little over two years into his UFC career, Forrest Griffin had established himself as not only a crowd-pleasing light heavyweight contender, but a free spirit who could always be counted on to go against the grain in whatever he decided to do. But when he asked for a fight with UFC debutant and former PRIDE Grand Prix champion Mauricio “Shogun” Rua in 2007, this was going a little bit too far.

Why? Just look at Rua’s resume before he entered the Octagon for the first time at UFC 76.

In addition to the aforementioned PRIDE Grand Prix title, which he won in 2005 by defeating Quinton “Rampage” Jackson, Antonio Rogerio Nogueira, Alistair Overeem, and Ricardo Arona, the aggressive native of Curitiba, Brazil had also taken out Cyrille Diabate, Kevin Randleman, Kazuhiro Nakamura, and Akihiro Gono in the organization, leading many to consider him the best 205-pound fighter in the world.

The last hill to climb would be in the UFC, and the majority of fight fans saw the scrappy Griffin, who was just one win over Hector Ramirez removed from a knockout loss to Keith Jardine, as a high-profile sacrificial lamb for “Shogun.”

There was one believer though; the man with the gloves on his hands.

“He’s one of the best in the world,” said Griffin at the time. “That’s why I wanted to fight him.”

But why now, at the height of his powers?

“Why not?” responded Griffin. “I’ve watched him fight for years. I see a guy with aggression, great cardio, good jiu-jitsu, but I think there are a lot of holes and I think he can be caught. If I play fast and loose, I think I can catch him.”

As for the critics that saw him as the highlight reel victim for Rua’s long-awaited UFC debut?

And what people forgot is that when it comes to grit, determination, and doing whatever it takes to win a fight, Griffin had it. He knew what his strengths were, and more importantly, he was aware of his weaknesses. Plus, this was a new venue – literally – for Rua, whose PRIDE career took place in a ring. Moving to the UFC Octagon for the first time was an overlooked factor in this bout. But it wasn’t overlooked by Griffin.

“It’s gonna be something I can hold him against and hold him down on, and make it hard for him to work his jiu-jitsu game with a combination of elbows and using the cage to smash him up against.”

Rua was well aware of the transition he was making too, and he said all the right things before fight night in Anaheim, California.

“I’m not concerned about the transition,” said Rua in a pre-fight interview. “My training in the last two months is inside the Octagon, and a few years ago I fought twice in the Octagon. The main difference is in the rules, but my team is making the adjustments and from now my kicks can be replaced by the elbows.”

It wasn’t really a fair trade, considering that the stomps and soccer kicks allowed in PRIDE rings were a huge part of Rua’s fight game and his intimidation factor. With Griffin not having to worry about either technique, it left him on a fairly even playing field. What wasn’t revealed until after the fight was that Rua was dealing with a knee injury that would require multiple surgeries over the ensuing years. But he was not going to let his fans down, and he felt that he had enough in the tank to get through the fight. He also didn’t pay attention to those who made him a huge favorite in a year that contained some of the biggest upsets in UFC history, including Matt Serra’s knockout of Georges St-Pierre and Gabriel Gonzaga’s knockout of Mirko Cro Cop.

“In this sport it is very difficult to talk about being the favorite before the fights,” said Rua at the time. “See the example of (Mirko) Cro Cop and (Gabriel) Gonzaga. So to be honest, I don’t spend my time thinking about that; I prefer to be focused in my training, and well prepared so I will always be confident for any fight.”

With Rua injured or not, Griffin wasn’t about to let this opportunity slip away though, and the fighter who entered the Octagon on September 22, 2007 would have been a handful for any light heavyweight on the planet, performing so well that you believe any version of Rua wouldn’t have had a chance that night.

This is how we called it that night:

In the eyes of many, PRIDE veteran Mauricio “Shogun” Rua was one of the best – if not the best - light heavyweights in the world. But in his UFC debut tonight at the Honda Center, Forrest Griffin elevated his own status in the 205-pound weight class at the expense of the feared Brazilian, dominating him throughout their three rounder and then finishing the bout with a submission at the 4:45 mark of the final round.

From the outset, Griffin showed no fear of the Curitiba resident, landing with strikes and fighting off Rua’s takedown attempts as the crowd chanted his name. With a little over a minute gone though, Rua got his takedown and started to open up with forearms in Griffin’s guard. Griffin fought his way back to his feet with a little under half the round gone, and after some trading of punches, he scored his own takedown, followed by some ground strikes before the two combatants, both showing swelling on their faces, stood and traded again, with Rua getting Griffin to the mat with 30 seconds to go. By the end of the frame, Griffin had reversed position and was in control at the bell.

Again standing in the pocket with Rua, Griffin scored early with strikes in the second until ‘Shogun’ got the takedown and bloodied his foe’s forehead with ground strikes. Incensed at seeing his own blood, Griffin fought back harder, reversing position on Rua and landing with his own strikes on the mat before the two stood again. With under two minutes left in the round, the two traded punches, with Rua looking to be the more fatigued. Griffin, tired himself, nonetheless worked Rua over when the bout hit the mat again, with referee Steve Mazzagatti watching the action closely.

Rua opened his final round offense with a takedown, and Griffin tried to pull a fast one with a 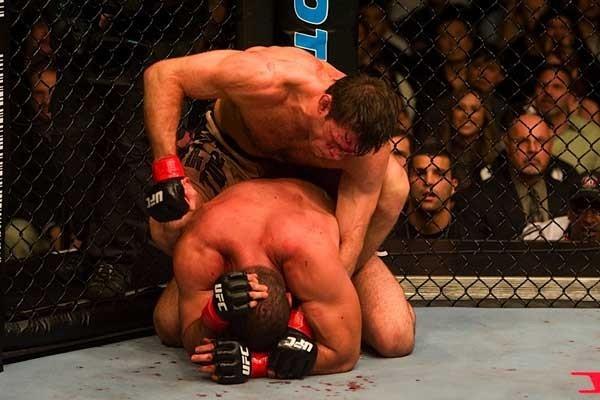 submission that was turned away. While on the ground, Rua fired away with the occasional elbow while Griffin fired back and continued to outwork his more celebrated opponent from all angles, eventually getting into a dominant position where he locked in a rear naked choke and finished off Rua with just 15 seconds left.

At the time of the stoppage, Griffin was leading 20-18 on all three scorecards.

The celebration after the finish by Griffin was something to see, as the stunned Honda Center crowd was silent for a moment, and then erupted. In his next bout, on July 5, 2008, the Ultimate Fighter season one winner shocked the world once again when he won a razor-thin five round unanimous decision over Jackson to win the UFC light heavyweight title. It was one of the greatest fights in organization history, but Griffin’s reign was short lived, as he was halted in three rounds by Rashad Evans in December of 2008. A disappointing KO loss to Anderson Silva followed, but Griffin has since defeated Tito Ortiz and Rich Franklin in back-to-back bouts, putting him back in the title picture, especially should he repeat his win over Rua at UFC RIO on August 27th.

Rua’s road back was a little more stressful. After a number of knee surgeries that came before and after fights in the UFC, many wondered whether he had left his game in Japan. But after a sluggish outing against Mark Coleman, Rua got back on track in April of 2009 with a knockout of Chuck Liddell. Six months later, he engaged in a five round battle with 205-pound champ Lyoto Machida, only to lose a highly controversial decision. Rua took the judges out of the equation in their May 2010 rematch, thrilling fans around the world as he became a UFC champion via first round knockout. In March of this year, Rua lost his title to 23-year old phenom Jon Jones, but with a training camp with his original Chute Boxe coach, Rafael Cordeiro, under his belt, Rua is expected to be coming out with all guns blazing in Brazil a week from Saturday. And what better way to begin the road to another title than by beating the man who spoiled his UFC debut?