Revisiting Evans vs. Ortiz I

Looking back at Evans vs. Ortiz I.... 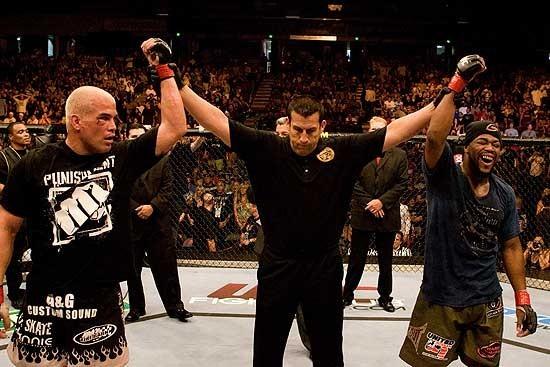 It’s the rematch no one thought would happen, but after numerous twists and turns in the careers of Rashad Evans and Tito Ortiz, the former light heavyweight champions will revisit their rivalry in the main event of UFC 133 on August 6th and look to break the tie they fought to back at UFC 73.

That July 7, 2007 bout in Sacramento’s ARCO Arena was part of a card appropriately named “Stacked,” thanks to the championship bouts between Anderson Silva and Nate Marquardt and Sean Sherk and Hermes Franca that topped the bill. But among fans both casual and hardcore, the meeting between former champion Ortiz and up and comer Evans held the most starpower, and neither shied away from building up anticipation for the bout, even getting into a brief altercation Octagonside at UFC 69 three months earlier.

But despite his lack of experience on the big stage compared to Ortiz, Evans didn’t shy away from a little pre-fight banter with “The Huntington Beach Bad Boy.”

“I grew up with a lot of brothers and sisters, and we used to shoot the dozens all the time,” said Evans at the time. “We always used to make fun of each other and tease each other, so I’m used to it to an extent. I’ve also got a group of friends that I grew up with and we’re just relentless on each other how we tease and make fun of each other, so it’s all good. I don’t take offense to any of that and I don’t get caught up in wanting to call him names because I know we have to fight. I’m a professional, and when you’re a professional, you act accordingly. You don’t flustered, you don’t get frustrated, and you handle it because it’s your job. I love my job, but it is a job, and you can’t be taken out of your game by anything and you can’t allow anyone to say anything to upset you.”

Ortiz tried his best though, and in the history of the sport, few have been better in selling a fight. But he was also at a pivotal point in his career. Winner of five of his previous six bouts, the sixth was a rematch loss at the hands of Chuck Liddell at UFC 66. If he was going to begin the road back to the title, he had to turn back the challenge of the Ultimate Fighter season two winner, who was hungry to claim his first big name scalp.

At the time, Evans was five bouts into his UFC career, and after a slow start in which he was criticized for not finishing fights, his previous two wins over Jason Lambert and Sean Salmon ended in knockout victories, allowing him to boost his unbeaten record to 15-0 while also establishing him as the next big thing at 205 pounds should he beat Ortiz. Ortiz wasn’t about to play gatekeeper though.

“With an undefeated fighter, they’re holding on to that record so much that they don’t want to have that loss,” said Ortiz of Evans in 2007.  “All of a sudden, all Rashad cares about is not losing, and the biggest thing that’s gonna overwhelm him is hoping he doesn’t lose and making sure he doesn’t lose.  With him trying not to make a mistake and trying to keep from exposing himself, I think I’m gonna capitalize on that.  When I grab a hold of him, everything’s going to kick into reality.  I’m gonna see how strong he is and he’s gonna realize how strong I am, and his speed is gonna be squashed by my strength.”
Evans wasn’t buying it, and he pointed to hunger as the reason why he was going to emerge victorious.

“I really try not to define people, but to be honest, I see Ortiz as a little something different than what he used to be,” said Evans. “To say that he can’t be a champion again, I don’t know – if I’m there he ain’t gonna be champion (Laughs) – but right now he seems to have a little bit of everything else going on and I don’t know if he has the focus and the desire to do what it takes to win. He’s Hollywood right now, he likes the limelight and everything else like that, but where MMA started and where it is right now, it’s not one of those sports where you can be that Hollywood type of personality. It’s not for the pretty boys; it’s for the blue collar guy who goes in there and gets his work done. And if he has time for everything else, then he’ll do it, but he’s not gonna put that ahead of being a champion. I think Ortiz just wants the limelight a little bit more than being a fighter.”

Those were fighting words from both sides, and all that was left was the fight. Here’s how I called it that night:

A second round foul cost Tito Ortiz dearly in his highly anticipated light heavyweight bout against rising star Rashad Evans, as a unanimous decision win instead turned into a three round draw thanks to a point deducted from the former light heavyweight champion for holding the fence as Evans attempted to secure a takedown.

“It wasn’t my best performance and Rashad was tough as hell,” said Ortiz.  “Rashad, we can do it again.”

“I thought I had that fight,” said Evans. “Please, Tito-Rashad II.”

Ortiz drew first blood with a takedown in the opening seconds, and the crowd chanted ‘The Huntington Beach Bad Boy’s name in response.  Evans did work his way back to his feet and tried to flurry, but Ortiz fired back and again clinched with Evans, pushing him to the fence.  A lost mouthpiece by Evans forced a restart, and while the former Michigan State Spartan circled his foe, Ortiz scored with leg kicks and the occasional jab upstairs.  As the round entered its final minute, the two combatants battled it out against the fence, with Ortiz emerging with a cut under his right eye.

There was little action in the early stages of the second round, with Evans’ first takedown attempt getting tossed aside by Ortiz being the only notable action in the first half of the round.  Again the action moved to the fence, with Ortiz working his Muay Thai clinch as Evans scored with a punch that reopened the cut under Ortiz’ eye.  With blood streaming down his face and with Evans finally looking like his offense was together, Ortiz shot in and went for what he knows best – the takedown and ground and pound.  Evans did work his way back up while getting a takedown of his own in the waning moments of the round, a series punctuated by Ortiz getting a point deducted for holding the fence. Ortiz almost had the last laugh though, as he sunk in a guillotine choke that looked like it could have produced a submission if locked in earlier.

Ortiz again took the bout to the mat in the third and final round, looking to put the finishing touches on his foe, and while Evans didn’t ever seem to be in any serious danger, he was not doing enough offensively to sway the judges in his favor.  With under two minutes to go, referee John McCarthy re-started the stalemated action and Evans let his hands go in an effort to protect his unbeaten record.  But while he was landing, he wasn’t hurting Ortiz, and though Evans finally got the big takedown he was looking for with 10 seconds left in the round, it was apparently too little too late to get the win.

“It took a little while, but I felt him break,” said Evans of the final sequence.

The stalemate put the first blemish on Evans’ record, but it didn’t hurt him in the long run. He went on to headline UFC 78 with a win over Michael Bisping, and then knocked out Liddell and Forrest Griffin, the latter bout earning him the UFC light heavyweight title. He lost the belt in his first defense against Lyoto Machida in May of 2009, but has rebounded with wins over Thiago Silva and Quinton Jackson that have put him right in line for another shot at the championship should he defeat Ortiz a week from Saturday.

As for Ortiz, his journey to Philadelphia has been a little crazy, a little rocky, and a very inspirational, all at the same time. The draw with Evans was the precursor to a three fight skid that saw Ortiz lose to Lyoto Machida, Forrest Griffin, and Matt Hamill. All the while, he battled through injuries and surgeries and the usual drama that always seemed to follow him. Add in the Evans draw and the loss to Liddell, and he brought an 0-4-1 record into the Octagon when he faced Ryan Bader at UFC 132 in July. UFC President Dana White didn’t mince words, saying that a loss would mean Ortiz’ UFC career was over. But Ortiz didn’t lose. Instead, he pulled off one of the most memorable wins in recent years, submitting Bader in the first round. A little over a month later, he will be replacing the injured Phil Davis against his old rival Evans.

This time, four years later, Evans is the gatekeeper for Ortiz’ return to the title picture, and it’s not only an intriguing matchup, but a pivotal one for the careers of both men.