Returning Varner Focuses on the Future

"I want to put on a show to show everyone why I was the WEC lightweight
champion and to show why people can believe in me again." - Jamie Varner 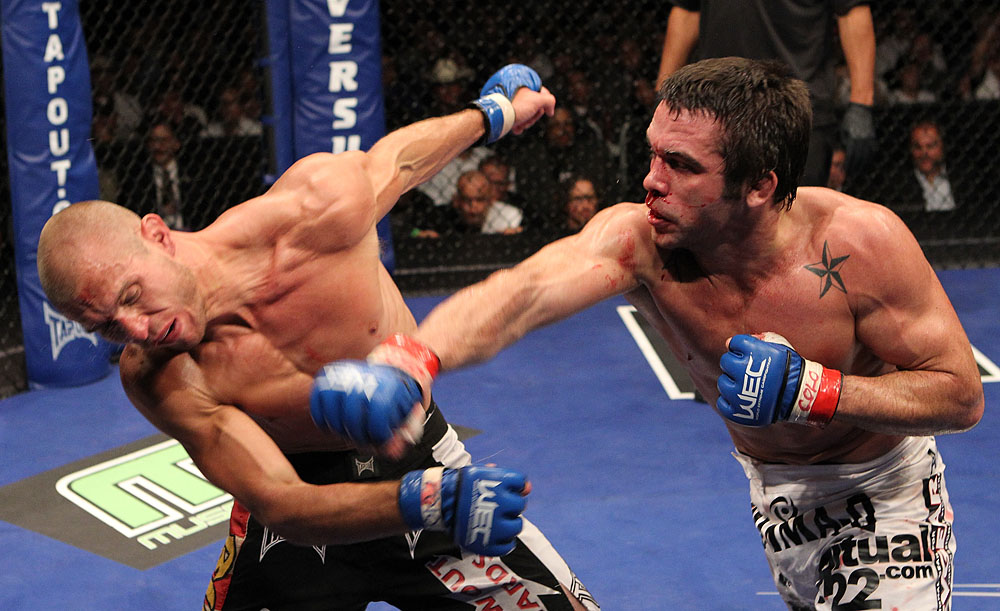 In 2009, Jamie Varner was the defending WEC lightweight champion. In 2010, Varner lost the title to Benson Henderson via third round guillotine choke, had battled to an inexplicable draw with Kamal Shalorus, lost a “Fight of the Night” rematch by decision to rival Donald Cerrone, and suffered a first round submission loss in the final WEC event to Shane Roller. Last year, Varner returned to smaller circuit shows, where he scored two lightning quick wins and a hard-fought decision loss. Finally this year, he defeated Drew Fickett in 40 seconds, got the call from the UFC, and is in the best mindset he’s been in for a while to answer this big opportunity.

“When you're on top for so long and when you hit bottom, you forget what it was like to be hungry, you forget what it is like to be down there,” tells Varner. “Since I've been gone, I've been able to get in touch more with reality and become a lot more grateful for the things I had, the things I lost. I think the biggest difference in me is my appreciation for all the people that have supported me, that have been around me, all the opportunities that I have been given, and the ability to fight for Zuffa. During that time off, I found out that I wanted to be a fighter. I wanted to be a competitor. Before, I was so sick of fighting, so sick of training. Realistically, 2010 was the worst year in my professional career and I guess it's because I didn't want to fight anymore. I took it for granted and I just didn't enjoy it and I lost the love for it. I think taking some time off and losing everything really made me appreciate what I had. It helped me find myself, I re-centered myself, I put myself around the right people, and now I'm back. I'm ready and I feel good. I think the biggest change is my overall happiness. I don't need to fight to be happy, but I like to fight and it makes me happy.”

At 27 years old, Varner has faced this career roller coaster and has come out the other side smiling and ready to face his next challenge. He credits most of this transformation to those who believed in him when he didn’t believe in himself: family, friends, fans, and, especially, Varner’s management Oren Hodak and Mike Constantino. It was these people who stood strong by Varner and helped change his mind when he felt, “I didn’t want to fight, I didn't deserve to fight, and I thought I forgot how to win.” The last piece of this puzzle came in the unlikely form of a past opponent and a new gym.

“I feel a lot better technically, physically, emotionally - I'm in a good spot,” explains Varner. “My home base is still Arizona Combat Sports with Trevor Lally and I have great workout partners there. I also outsourced my training to The Lab with Ben Henderson, Efrain Escudero, and coach John Crouch. I had to really grow up. Eat a little crow, swallow a little pride. I had to go into a gym that I knew would make me better and to be around guys that I knew would make me better. Their outlook on everything and fighting has really changed me, inspired me, and motivated me to want to be a fighter and want to be a fighter in the biggest and best organization. I was ok fighting in small shows, just doing it because I liked competing. But now these guys helped me believe in myself and I hope to one day figure out what the hell we're going to do as far as coaching when it's me versus Ben for the belt.”

Before Varner can duel “Smooth” for the UFC lightweight belt, he needs to reclaim his spot in the division’s top 10 by beating Edson Barboza at UFC 146. On Memorial Day weekend, Varner will mark his first fight in the Octagon since 2007 and a return to the Zuffa umbrella in a clash with the undefeated Brazilian. Originally, Barboza was scheduled to take on Evan Dunham, who was forced out due to injury and, now, replaced by Varner. The product of The Armory in Jupiter, Florida has been continuously impressing fight fans with each of his four wins in the UFC, which have almost exclusively been contested on the feet.

“Edson Barboza is a freak,” affirms Varner. “He's fast, athletic, strong. What I know about Edson are his four fights in the UFC and he's tough and a scary fighter. Evan Dunham is an absolute stud and I wish him a speedy recovery, but I am really grateful for the opportunity I have been given and to try to fill his shoes. Those are some big shoes to fill. Edson is extremely tough and it's a short notice situation, but I feel like I have everything to gain and nothing to lose. I go out there and fight Edson and lose to him, what's it to lose to Edson Barboza? But if I go out and beat him, that catapults me right back to the top. That would put me in as a top five or top 10 lightweight in the UFC. Only good things can come from this fight. My goal is to make it as hard on him as possible. If he puts his hands down for a second, I can hurt him. I have that one punch that can end the fight and we've seen that before. I always have a puncher's chance, but I think my overall preparation and mindset will be what carries me through this fight, whether it is Fight of the Night, a quick knockout or submission. I want to put on a show to show everyone why I was the WEC lightweight champion and to show why people can believe in me again.”

The fight itself should be a guaranteed, no brainer, bet the house on it, entertaining scrap at 155 pounds. Barboza is a bonus machine with his last three bouts winning Fight of the Night and in his most recent outing he also scored a Knockout of the Night over Terry Etim at UFC 142. Meanwhile, Varner has had many memorable tussles including a couple with kickboxer types like “Cowboy” Cerrone and the title winning slugfest with “Razor” Rob McCullough. Varner has had success against top fighters before, and is fully estimating Barboza could be his toughest test to date.

“I don't think I've ever fought anyone as fast as him before,” states Varner. “The speed thing on his end is probably one of his greatest assets. I haven't fought anyone as fast as him. Usually, I'm the faster guy. That is one thing that I'm not used to. As far as kickboxers, I have fought kickboxers before. Not too many that are crazy with the spin kicks, which is something I have to watch out for. He's just another kickboxer with good wrestling defense. A lot like Rob and a lot like Donald. I know I can make it 15 minutes with those guys. If it is just a kickboxing match in there, I know I can hang. Will I win a kickboxing match? Probably not, but I know I won't get beat bad. I'm confident in my kickboxing. He brings a lot more to the table than kickboxing - he hits fast, he has good movement, he is long, and he's got good wrestling defense. The key here will be to punch when he punches and hopefully walk him into something that he doesn't see.”

As mentioned, Varner is training both at his usual Arizona Combat Sports in Tempe as well as the new addition of The Lab in Glendale. It may have been a while for some fans, so as a refresher, Varner’s a heavy-handed boxer with strong wrestling and the majority of his wins have come by submission (11 of 19). The first two traits can be traced back to Varner’s NCAA division I wrestling background from Lock Haven University, where he was a National Collegiate Boxing Association champion too. The problem wasn’t about how sharp the weapons were, what prevented Varner from crossing over like his contemporaries Cerrone and Henderson was his diminishing internal fire for the sport, which has been rekindled.

“The thing that set me apart from them and their success was mentally they wanted to fight and I didn't,” divulges Varner. “They wanted to be fighters and I just lost my love for the sport. It's never been a question about ability. As far as ability is concerned, I have all the tools. I hit hard, I'm strong, I'm athletic, I have good wrestling, I have pretty good jiu-jitsu, and my striking is on point. It was always my mental game that held me back. I belong in the UFC, I belong in the top 10. Edson Barboza and UFC 146 is my chance to prove that I belong in the top 10. Not just to the fans, but I get to prove it to myself. It's going to be a tough fight, it's going to be a grueling fight. It could be over with one kick or one punch, but I don't see that happening. I see this being long, painful, and torturous, but in the end my hand should get raised.”

On May 26th in Las Vegas, the former WEC champion looks to make his triumphant return in a showdown with top contender Barboza. “I'm nervous, I'm scared, I'm excited,” admits Varner, who is ready, win or lose, to give it his all for the fans and for himself. “I have all these emotions, but I'm going to go in there and fight without fear and whatever happens happens. I'm either going to come back with my shield or on it.”

A win over Barboza would be a huge step for Varner in forgetting years past and focusing on a more positive future.