THE RETURN OF THE ULTIMATE FIGHTER | EPISODE 12 RECAP

It's The Last Of The Semifinals On The Return Of The Ultimate Fighter. See Which Middleweight Will Advance To The Finals
By E. SPENCER KYTE, ON TWITTER @SPENCERKYTE • Aug. 17, 2021

In the third preliminary fight, Team Ortega’s Tresean Gore took out Team Volkanovski’s Ryder Newman, winning by unanimous decision, while Gilbert Urbina made quick work of alternate Michael Gilmore, submitting him in the first round.

Now Gore and Urbina face off in the Octagon, with the winner moving on to face Team Volkanovski’s Bryan Battle in the middleweight finals.

This is Episode 12 of The Return of The Ultimate Fighter.

At the house, Ortega stops by with his two sons, his brother Chris, and his father, introducing all of them to the team.

“I never shared my family, except my brother and Dad,” Ortega says in a solo interview. “I’m sure no one knew I had kids, until now. It’s something that’s ‘private life, happy life,’ but as I got to know these guys, see them suffering, missing their families, talking about kids, this and that — I was like, ‘F*** this, dude. These are my pride and joys’”

Ortega and his father head into the backyard and get to work on the grills, cooking up a feast for the fellas.

In a confessional interview, Tresean admits that he’s really homesick, and talks to Ortega about feeling sad, with his coach intuiting that it’s from feeling the family vibes throughout the day.

“You’ll fight, you’ll win, and then you’ll go home and see them,” Ortega tells Tresean, who deeply misses his wife and newborn son.

You can see the impact having Ortega and his family around the house had on the guys, who all enjoyed that time, as did the featherweight contender.

Inside the UFC Performance Institute three days ahead of the fight, Gilbert goes through his fight prep, voicing the various scenes of him training by recounting that “everyone has always questioned my standup since the beginning of my career.”

He talks about work he’s put in on his striking, how he believes he’s come a long way in that regard, but has been happy to take the opportunities presented to him to grapple.

Volkanovski knows Tresean is going to want to keep it standing, and he’s confident that Gilbert can mix it up with him there, believing his movement and combinations will play well in this matchup and that having the grappling in his back pocket will help Gilbert. 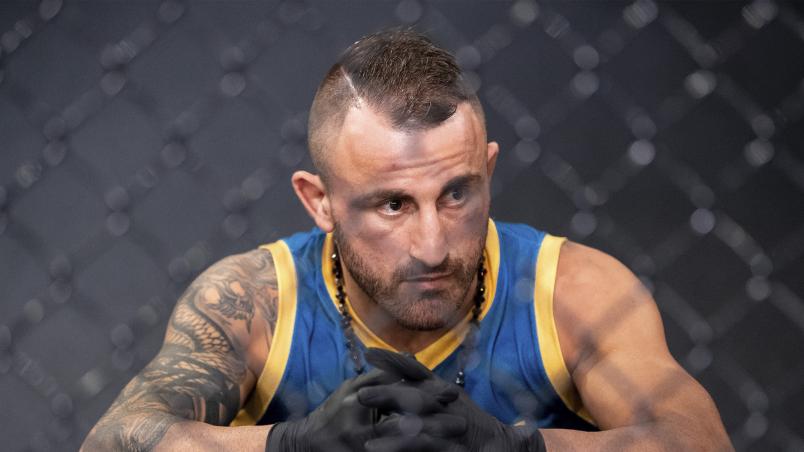 Back at the house, four members of Team Volkanovski and Tresean hang out by the pool, where Ryder spits some lyrics before passing the mic to Tresean, who breaks out a little a capella song.

Cut to the PI, where Tresean is getting his fight prep in ahead of his clash with Gilbert.

“What I see is me being in his face, making him uncomfortable,” he says of the final middleweight matchup of the season. “He’s gonna throw all his weapons to try to keep me at bay, but it’s not gonna work.

“I’m just ready to go in there and make this great fighter look average.”

Ortega and Tresean have a sharp sparring session, going hard with one another, with Ortega explaining to his charge that it’s the mental side of things where he needs to continue building.

“We can all be tough. We can all fight. We have to be disciplined — all the way to the fight, we have to stay disciplined. Down to your fight, your strategies, your intuition when you’re in there — whoever does this s*** the right way, has the most advantages, and in a game of inches, you want every f****** advantage you can get.

“It’s going to be a crazy war or a nice fight,” Ortega adds.

“It’s not going to be a war,” Tresean counters.

“Make it a beautiful fight then,” his coach responds.

SEE WHAT THE COACHES OF TUF 29 HAD TO SAY: Volkanovski | Ortega

Back at the house, Tresean shadowboxes in the backyard while Gilbert cleans the grill for him, speaking about the connection he feels with Tresean, while the two share a moment as respectful competitors outside.

Gilbert is first on the scale, coming in at 185.5. Tresean steps up and hits the same number, making the fight official.

Various team members weigh in on the matchup, with only Ryder suggesting that he’s unsure who will win, calling the impending clash a “dogfight.”

At the house, Tresean makes a FaceTime call to his wife and his son, talking about the anxieties he’s been battling, speaking glowingly about his wife and the changes he made when she entered his life in a confessional interview. Gilbert gets his chance to call home next, connecting with his family, tearing up as they share with him how proud they are of him and his success thus far.

Tresean reads from his Bible in the backyard before departing for the UFC APEX, while Gilbert gets on the bus and heads to the facility, touching the team jerseys from the seasons his brothers competed on ahead of him as he makes his way to his dressing room.

“They don’t want it like I want it man,” Tresean says in a confessional interview ahead of the fight, as both men warm up in the back before making the walk to the cage.

Mark Smith joins the middleweights in the Octagon and it’s time to find out who will face Bryan Battle in the finale. 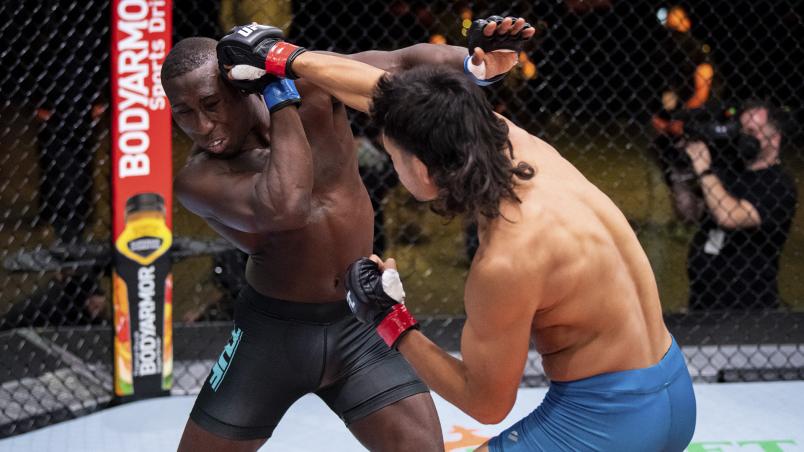 Round 1: Tresean sprints across the cage to close the distance to start, trying to hem Gilbert in along the fence. Gilbert is the first to throw, but Tresean is the first to land, connecting with a long jab. Gilbert lands a right and Tresean lands a body kick behind it.

Gilbert presses forward behind a combination, which Tresean handles easily, and then he drops Gilbert with a short left hook. Gilbert pops right back to his feet and backs up towards the fence, with Tresean coming forward at him. Gilbert looks to have recovered as neither man throws anything in the 30 seconds after the knockdown, with Tresean applying pressure, but unable to cut off Gilbert’s movement.

Gilbert lands a kick to the thigh and one to the body, but Tresean is unbothered. He pushes forward again, digging a long left hook to the body, with another front kick to the midsection behind it. Tresean sticks a long jab in Gilbert’s face but doesn’t follow up. He lands another, but again it’s just a single shot.

Gilbert lands another kick to the thigh and is starting to apply pressure. As he comes forward and throws out a jab, Tresean counters at the same time and drops him again. Gilbert scrambles to his feet quickly again and Tresean looks to capitalize, with Gilbert firing back aggressively off the fence with a little over two minutes remaining in the round.

Gilbert lands a good jab from southpaw and another kick to the thigh, walking Tresean down. He attacks the thigh again, but once more, he staggers backwards after Tresean pops him with a jab. They trade strikes ­— Gilbert attacking the thigh with a kick, Tresean countering with a right hand — and it’s clear the power difference is vast between the two. The sequence is repeated and again Tresean’s blow lands heavier.

Tresean presses forward and again backs Gilbert up with a sharp, clean jab. Gilbert crowds his way in and lands a right hook to the jaw, but it has little impact. With 30 seconds remaining, Gilbert looks to step in and Tresean intercepts him, wobbling him once more with a right hand.

Gilbert finishes the round coming forward and landing, but it was a dominant frame for the Team Ortega middleweight.

Round 2: Tresean comes forward to start, but Gilbert backs him up with long punches, only to stop advancing and let Tresean come forward again. With Gilbert circling along the cage, Tresean hits him with an overhand right followed by a left uppercut that lands flush, adding a long jab on at the end.

Gilbert circles out, but Tresean is in pursuit, landing the same overhand right, uppercut combo again. Gilbert tries to back him off with a teep kick to the midsection, but as he walks forward to press the action, Tresean once again intercepts him on the way in, putting a left hook on his jaw that sends Gilbert to the canvas and prompts Mark Smith to instantly stop the fight.

Tresean gets on his knees and gives thanks to God while the Team Ortega coaches celebrate. 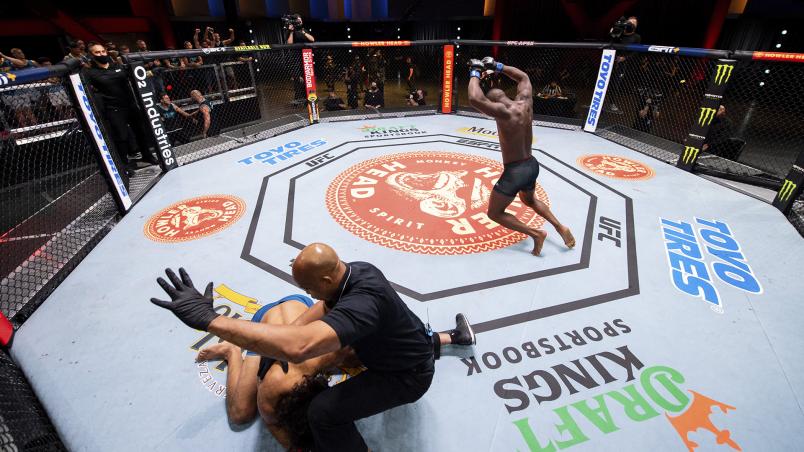 The highlights of the fight roll and the coaches recap the action, with Ortega thrilled with Tresean’s performance.

“What a way to cap off a great season,” begins Dana White, “with an incredible knockout and a very well-deserved win for Tresean Gore. This kid has a ton of heart, and he is determined to become the next Ultimate Fighter.”

Ortega and Tresean share a nice moment in the Octagon, with Ortega quietly congratulating Tresean, reminding him that he’s in the finals and that the coaches will see him there.

“When I come back for the finale, it’s going to be levels above where I’m at right now,” Tresean says.

Gilbert accepts the defeat, giving praise to Tresean as he heads into the medical room following the bout, proud of his efforts, while acknowledging he lost to a better man.

Back in the APEX, Dana White squares off the finalists for the first time, with Team Volkanovski’s Bryan Battle taking on Team Ortega’s Tresean Gore in the middleweight finale, while Team Volkanovski standouts Ricky Turcios and Brady Hiestand are set to battle in the bantamweight finale.

The UFC President is pumped for both matchups, which take place on the main card of UFC Fight Night on Saturday, August 28 on ESPN.

Then the coaches go face-to-face in the center of the cage, as featherweight champ Alexander Volkanovski and challenger Brian Ortega square up in a fight that is set to headline UFC 266 on September 25.