The Return Of The Ultimate Fighter | Episode 11 Recap

It's The Third Round Of The Semifinals On The Return Of The Ultimate Fighter. See Which Of The Bantamweights Will Advance To The Finals
By E. SPENCER KYTE, ON TWITTER @SPENCERKYTE • Aug. 10, 2021

Now the time has come for Vince and Brady to square off to see who will meet Team Volkanovski’s Ricky Turcios in the bantamweight finals.

This is Episode 11 of The Return of The Ultimate Fighter!

The episode opens with Team Ortega getting some kind of delivery at UFC Headquarters. Brian Ortega explains that a few years ago, he bought a punch of exotic pets, developed a relationship with the owner, and kept purchasing pets from the same guy, so he reached out to get the owner involved in a retaliatory prank against Team Volkanovski.

When they open the giant crate they’ve wheeled in, there are several giant snakes in the crate that get unloaded into the Team Volkanovski dressing room. Ortega is hoping it freaks out Volkanovski, but Brady is the first through the door and he and several other fighters lose it.

But Volkanovski isn’t particularly bothered. He’s surprised they’re real, but he’s also from Australia, where there are all kinds of giant, terrifying animals. He welcomes one of the snakes being wrapped around him and talking about its squeeze, giving Ortega and his team props for another solid prank.

At the UFC Performance Institute for a training session, Team Volkanovski are joined by veteran gunslinger Donald “Cowboy” Cerrone. The competitor with the most wins in UFC history imparts some knowledge on the hopefuls, talking to them about consistency, staying positive, and enjoying the journey of being a fighter, both in terms of practice and the people around you.

He sticks around to go through jiu jitsu practice with the team, with both Brady and Gilbert Urbina, the second Team Volkanovski middleweight left in the competition, getting some time with him on the mats.

Back at the house, a couple of the Team Volkanovski guys sit around in the living room, talking about how they’ve had very little interaction with Vince and don’t know much about him; not saying anything negative, just acknowledging that he’s one of the more quiet, self-contained competitors in the house. 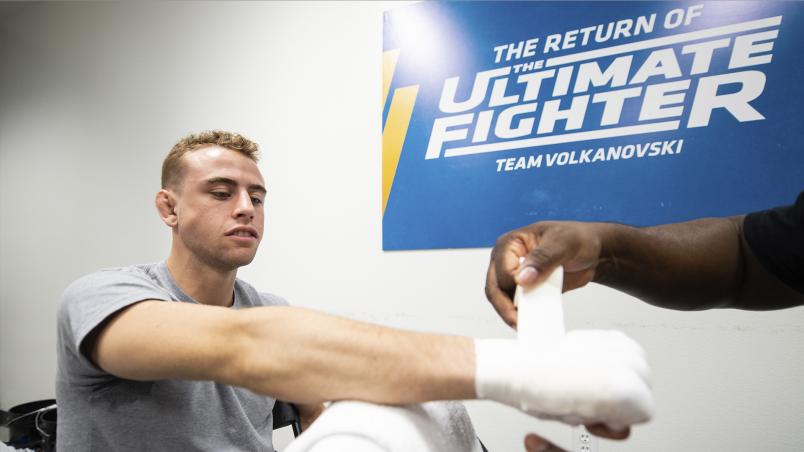 Mitch Raposo and Brady explain his medical situation to Bryan, who was unaware of Vince’s previously being signed to the UFC and undergoing brain surgery.

Brady acknowledges that Vince has one of the best records in the house, adding that he’s fighting the two 30-year-old bantamweight hopefuls, having already shared the cage with and defeated Josh Rettinghouse.

Four days before the fight, Team Ortega is at the UFC PI and Vince speaks with the coaches about his career and his journey, admitting he feels “under-accomplished” having not reached the UFC already.

SEE WHAT THE COACHES OF TUF 29 HAD TO SAY: Volkanovski | Ortega

“Having the ability to compete again means the most to me,” Vince says, speaking with Ortega, who praises his sense of calm and appreciation.

While he’s shown doing some shadowboxing and drilling, Vince explains he’s focusing on his conditioning in order to maintain a high pace, noting that Brady struggled to maintain his energy and output in his fight with Josh earlier in the season.

“My resolve is much bigger than anyone’s here,” he says. “I’m fighting for so much more than here. I’ve been in this sport when this kid was 12 years old.”

He goes through some grappling scenario training with Rener Gracie, working get-ups and triangle escapes, and hitting mitts with Dr. Jason Park, doing so with a giant brace on his left leg. In a confessional interview, Vince acknowledges that he has a small tear in his MCL, but that he’s going to do his best to adjust and work around it.

“This kid’s looking to test me and I’m going to test his chin,” he adds.

Inside the UFC APEX, a game of cornhole is set up as the two teams roll in, where UFC President Dana White and Octagon Girl Brookliyn Wren are awaiting their arrival. Dana explains how the game will go — it’s a game to 21 and you have to outscore your opponent each round to accrue points — and that the winning coach gets $10,000, with every member of the team coming away with $1,500.

Ortega speaks confidently about his chances against Volkanovski in a solo interview, reflecting on his younger days playing different games at the Boys & Girls Club, and the competition gets underway.

Neither side amassed any points through the first few rounds, constantly cancelling each other out. Ortega finally got on the board in Round 6 with a single point, eventually building a 6-0 lead, but then just like with the fights, Volkanovski started rallying back, drawing level in Round 16.

Then Ortega grabbed eight more points, only to have Volkanovski force his way back in again. Back-and-forth they went, with Ortega reaching 20 in Round 24, and sealing the deal with a single point in Round 25, winning the competition 21-11.

Ortega then asked Dana, “Can I get 2Gs more?” and Dana agrees, with Ortega announcing, “My 10Gs go to all you fighters,” pointing to Team Volkanovski, who erupt with happiness and thank their rival coach. It’s a class move by the featherweight title hopeful.

“I’m the kind of guy where if I have a dime, you have a nickel,” he says in a solo interview, as the members of Team Volkanovski one-by-one thank him for his generosity.

Two days before the bantamweight semifinal fight, Brady goes through his prep at the PI while Volkanovski speaks glowingly about his young charge.

Volkanovski works with Brady on strategy, breaking down how Vince will likely approach the fight and applying what Brady does well to that, working on different entries and how to strike coming forward against someone that likes to counter.

It’s time for the weigh-ins, and Brady is up first, weighing in at 134.5. Vince follows him to the scale and comes in at 136 even, making the fight official. They face off, shake hands, and soon enough, they’ll step into the Octagon to determine who is moving on to face Ricky Turcios at the finale.

Back at the house, Vince shares a FaceTime call with his pregnant wife, who has been dealing with a lot of things, including moving, while he’s been away. He speaks about wanting to be a role model for his child and explains that he and his wife got married a week before his brain surgery, flying completely blind on what the future would hold.

Brady does the same with his family, calling his mom and his brother, who is pumped to hear that Brady rolls with Team Volkanovski jiu jitsu coach Craig Jones every day. The call brings Brady some peace and comfort, getting him focused in ahead of his fight.

Fight Day is here and the bantamweight semifinalists make their way to the UFC APEX.

Each guy gets loose in their dressing room, receiving final instructions, direction, and encouragement from their coaches before heading to the Octagon, where Mike Beltran joins them as the third man in the cage. 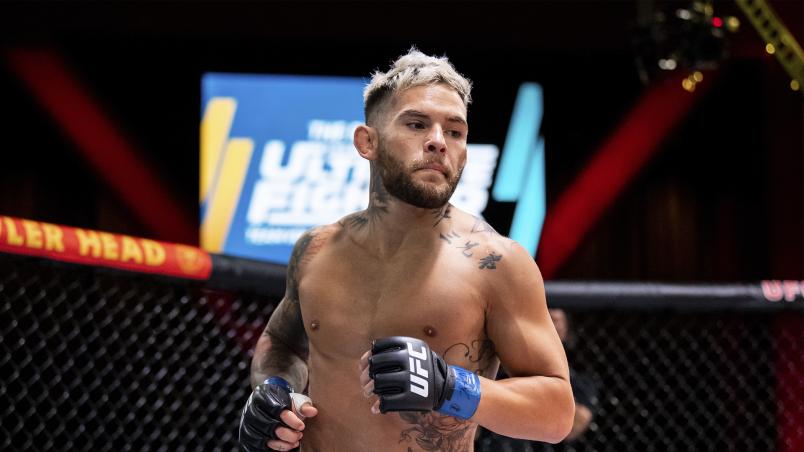 Round 1: Brady comes forward out of the gate, as expected, pressing forward, forcing Vince to circle. Vince pushes back with punches that fall short, and Brady counters by changing levels, getting him to the ground. Vince is super-active off his back, attacking with punches, not allowing Brady to get in close and settle in top position.

Brady finally works his way into Vince’s guard and his coaches shout at him to settle down, reminding him of how much time he has to work. Vince keeps trying to create space with his legs and Brady moves to side control, landing elbows and punches, looking to transition further. Vince does a good job of getting his legs active, forcing Brady back into his guard momentarily, only for the Team Volkanovski fighter to pass once more as he stacks and clears the legs.

Brady settles into side control with three minutes left in the round, mushing elbows into Vince’s face. He looks to climb to knee-on-belly or mount, but can’t get there, returning to side control and connecting with several left hands. Vince bucks and looks to get up, but Brady stays with him and puts his shoulders back on the canvas, remaining in side control with more than two minutes still on the clock. 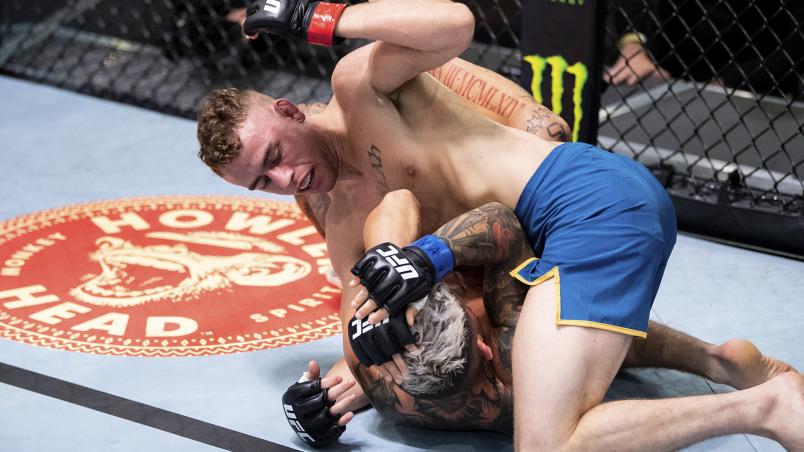 Vince keeps trying to create space and Brady continues to stay with him, moving to the back and hammering away with heavy shots. Brady gets his hooks in and starts pouring it on. Beltran comes in for a close look, instructing Vince to defend himself, and when he doesn’t respond, the fight is stopped.

What an absolutely dominant effort from Brady Hiestand, who erupts in excitement and makes it an All-Volkanovski bantamweight final.

As the physicians come in to check on Vince, he tells them he blew out his knee right out of the gate.

Official Result: Brady Hiestand def. Vince Murdock by TKO (punches) at 3:20 of Round 1 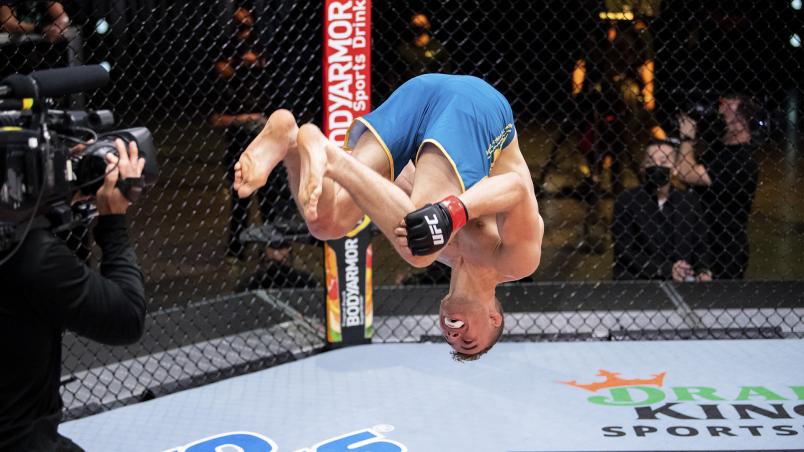 The coaches recap the action, with Volkanovski singing Brady’s praises, suggesting that Team Ortega’s bantamweights probably thought they would walk through the 22-year-old from Spokane, only for Brady to take out the two most seasoned competitors in the competition.

Vince gets help back to the medical room, explaining that he’s been dealing with knee injuries since he was 17 and that his left knee locked out during one of the early moments on the ground.

“Losing this way sucks,” he says, emotions starting to wash over him. “If I’m gonna lose, I’d rather have it handed to me. My whole life has been a learning experience… I’m f****** tired of losing.”

Wiping away tears, Vince adds, “I used to tell people that most of my adversities and losses are handed to me because I can handle them, but it’s just getting harder, and I really don’t know. This one is just hard… this one just hurts because I feel like I did everything that I could to prepare myself.

“I don’t know. I really wanted this one,” he says, leaving the facility on crutches.

On the next episode of The Return of The Ultimate Fighter…

The fighters enjoy the final days in Las Vegas with their teams, eating and spending time with their coaches and teammates.

Then, middleweights Gilbert Urbina and Tresean Gore square off to determine who will face Team Volkanovski’s Bryan Battle in the middleweight finals.

Tags
The Return Of The Ultimate Fighter