The Return Of The Ultimate Fighter | Episode 1 Recap

The Ultimate Fighter is back!

After years of taking place in the iconic gym tucked down a cul-de-sac in Las Vegas that played host to countless memorable finishes and fights, this new season comes with a shift to the UFC APEX, with the athletes benefitting from the opportunity to train at the UFC Performance Institute. With state-of-the-art facilities and top-of-the-line training options, the expectations for this season’s bantamweight and middleweight hopefuls are high.

MORE TUF 29: How To Watch The Return Of The Ultimate Fighter | All Things TUF

There is also a great deal of excitement surrounding the coaches this season as well, as featherweight champion Alexander Volkanovski and No. 1 contender Brian Ortega will lead their respective squads into competition while readying to face one another later this year. Already established as elite competitors inside the Octagon, this season is also an opportunity to get to know the champion and challenger a little more and for the excitement surrounding their delayed championship pairing to rise to a new level.

Opening the episode, UFC President Dana White greeted the coaches and hopefuls inside the APEX, explaining that five Hall of Famers and 11 champions have emerged from The Ultimate Fighter and that they’re about to enter into the most challenging adventure of their lives.

The competitors and the two coaching staffs venture to the Performance Institute to go through evaluations, cycling through a series of activities, including shadowboxing, jiu-jitsu, and striking. Ortega and his team immediate identify that Ricky Turcios operates in a world of his own, while Volkanovski and his coaching staff try to make their reads on the collection of upstarts that will compete this season.

In addition to getting the scoop on what each contestant thought was their greatest strengths, Ortega and his coaches gave each the chance to state which team they would like to be on if given the opportunity to pick for themselves, putting a triangle next to those that wanted to join Team Ortega and a square beside anyone answering Team Volkanovski.

SEE WHAT THE COACHES OF TUF 29 HAD TO SAY : Volkanovski | Ortega

“And a lot of people didn’t want to be on his team,” notes Ortega, who earned his second opportunity to challenge for the featherweight title with a dominant decision win over “The Korean Zombie,” Chan Sung Jung, last October on UFC Fight Island.

After a brief pause to talk things over amongst their teams, the coaching staffs return and it’s onto the selection stage, with the same stipulation as always attached to the coin flip: you can pick the first fight or the first fighter. 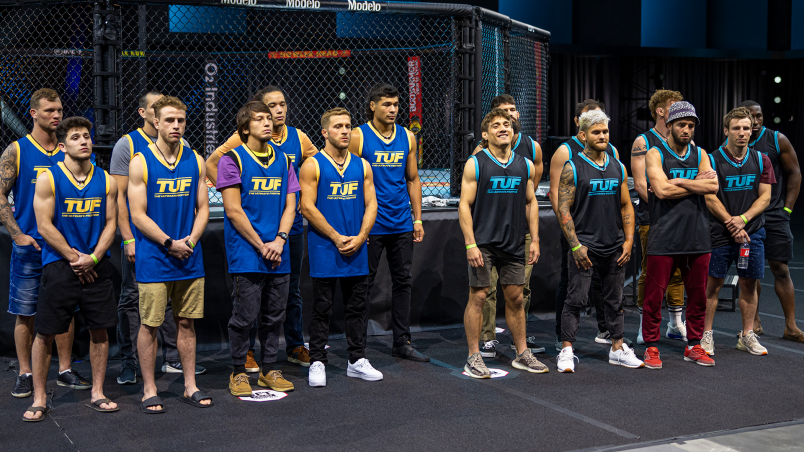 Team Ortega follows by selecting Dan Argueta, who finds being the team’s first pick funny because he’s “never been picked first for anything, ever.”

From there, the picks come hot and heavy until only middleweight Kemran Lachinov remains. Dana tells him that Kelvin Gastelum “was picked dead last,” Ortega announces his selection, and the teams are set as follows:

“They picked the first fighter, so we pick the first fight,” says Ortega, who announces that Andre Petroski will take on Aaron Phillips in a middleweight matchup.

Phillips says that he was expecting to get matched up against the top guy from the other team, so he’s not surprised by the selection, while Petroski notes his opponent is mainly a wrestler, giving him an advantage inside the Octagon.

And with that, Season 29 of The Ultimate Fighter is officially underway. 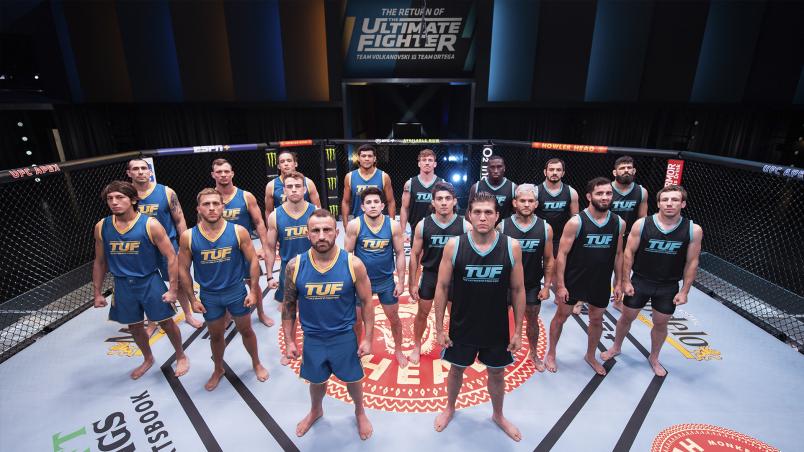 Dana offers a reminder that in addition to training together, the cast members will be living together as well, and we get our first look at the new digs these competitors will be calling home throughout the season as the team vans pull up and the fighters start exploring their surroundings, pick their rooms and start to settle in.

Brady Hiestand explains that he and Josh Rettinghouse both hail from Spokane, Washington and are good friends, which is why they opted to be roommates despite being in the same division and on opposite teams, noting that they could cross paths in the competition, while Ryder Newman and Miles Hunsinger have trained together at Xtreme Couture for years.

“But when it comes to that cage, you gotta have that switch,” says Newman. “When it comes to Miles, he’s my teammate, he’s literally my brother, but we’re both here for business.”

Night turns to day and we’re off to the first training session for Team Volkanovski, with the featherweight champion getting in there and mixing it up with his athletes as they try to get a read on the team members.

Aaron Phillips explains that most of what he’s learned about MMA has come from YouTube, noting that finally training in a professional setting like this is “a dream come true.”

Team Ortega gets their time in the space and Ortega explains his approach to coaching, noting that he’s a great coach because he was taught by great coaches like Rener Gracie. He shows the team some different attacks and movements on the ground, and then we get a look at a couple other members of the coaching staff, Tiki Ghosn and Paul Herrera, working with the team, who are happy to finally be getting down to work.

Ortega spends some quality time helping to prepare Andre Petroski for the first fight of the season, which Petroski appreciates.

Vince Murdock explains how quickly Team Ortega has bonded as they sit around sharing photos of their families and talking about the challenges of having kids.

A home video takes us to Glendora, New Jersey, where Petroski lives with his girlfriend and their daughter, Riley, and we learn a little more about the 29-year-old Team Ortega middleweight, who is clearly a proud #GirlDad and enjoys summers on the water.

Petroski trains at Renzo Gracie in Philadelphia and was a Division I wrestler in college, racking up 97 wins. He’s 5-1 in his pro career and held the Art of War middleweight title, and entered the competition coming off a main event appearance under the LFA banner.

“Everything is coming together,” he says. “A tournament style is tailor-made for me. It is my time to shine.”

Back at the APEX, we get a little more background on Phillips, who is already feeling the benefits of working with Team Volkanovski as he prepares for his fight with Petroski. The team believes they’ve identified holes in Petroski’s approach that Phillips will be able to exploit, with the expectation being a wrestling-heavy game plan where Phillips can land a big right hand and secure the finish.

A couple members of Team Volkanovski talk with Phillips about the game plan, pumping up their teammate ahead of the fight, but Mitch Raposo doesn’t seem as confident in the plan or Philips’ chances as he lounges on the couch in the living room.

Team Ortega gathers at the APEX to go over what they know about Phillips, with Petrovski explaining he’s a 5-2 fighter from Alaska that wrestled in junior college and that “he told somebody he taught himself jiu-jitsu.”

Ortega lays out the game plan and it’s exactly what you would expect: get inside, get him to the ground, and go to work, finishing either with ground-and-pound or a submission.

Petroski goes through his fight prep with the coaches, getting a ton of work in with Ortega, noting it was basically “a two-hour private,” sending him into the fight brimming with confidence.

Phillips’ home video begins with coffee brewing in his home in Kotzebue, Alaska, which he tells Newman and Bryan Battle beforehand was -50 degrees with the wind chill before he left and has a population of roughly 4,000 people.

The 30-year-old middleweight lives with his girlfriend, a special education teacher, and grew up in the Inupiat community. He explains again that his initial education in MMA came from YouTube and that entered right into the professional ranks.

Weigh-In Day arrives and the fighters hit the scale, Petroski clocking in at a chiseled 186 pounds, while Phillips hits the same mark, with members of each team expressing their excitement for the fight and supporting their guy. 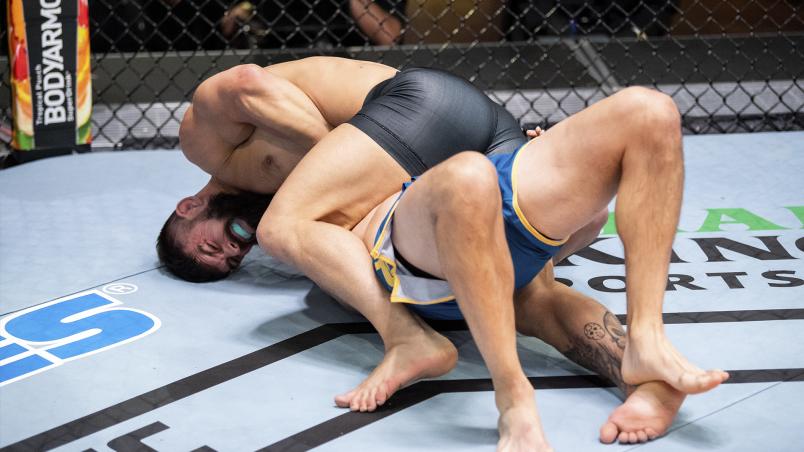 Round 1: They touch gloves and we’re off.

Hesitancy and feints to start on both sides, as they circle the cage in small steps, getting reads on one another, neither particularly eager to rush in. Phillips lands an inside low kick and Petroski looks to close the distance with a right hand but misses. They’re getting a little more comfortable and loose, with Petroski getting a high kick blocked just before the midway point of the round.

Phillips lands a pair of kicks, drawing cheers from his teammates, but Petroski drives in for a single leg, pushing through and sticking with it until he ends up in side control. Phillips uses a knee shield to prevent Petroski from moving to mount, with the Team Ortega fighter trying to work his arm around Phillips’ neck.

Phillips drops the knee shield and Petroski quickly climbs into mount, clamping down on a guillotine and drawing out the tap.

It’s a big, impressive, first-round finish for Petroski and Team Ortega in the opening fight of the season.

Petroski is pumped with his performance and Phillips is bummed out but is eager to be a good teammate for the rest of Team Volkanovski while being determined to stay healthy in case an opportunity to return opens up later in the season.

Dana explains that since Team Volkanovski had first pick in both weight classes, Team Ortega gets to make the first bantamweight fight as well and the matchup is made: Liudvik Sholinian vs. Mitch Raposo.

And just like that, we’re off and running with The Return of The Ultimate Fighter.