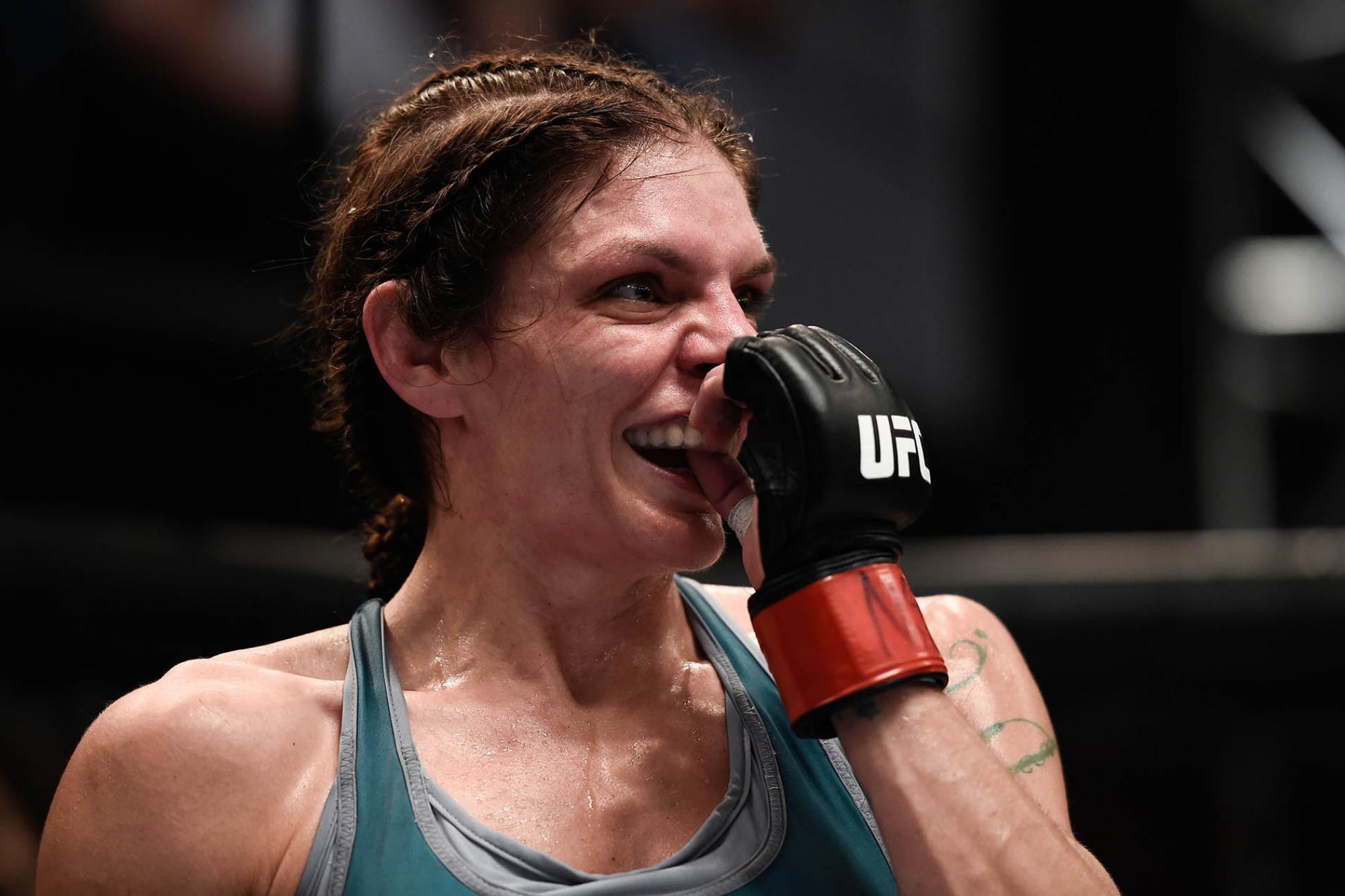 As the return of The Ultimate Fighter approaches on June 1 (airing exclusively on ESPN+), we’re taking a look back at some of the show’s notable graduates
May. 26, 2021

It’s funny how the universe works sometimes. Lauren Murphy, a former Invicta FC bantamweight champion with four UFC fights to her name, didn’t feel like an MMA veteran earlier this year. Then she joined the cast of The Ultimate Fighter and everything changed.

“I felt like I was still a little bit in over my head and like I was still the new kid on the block,” she said. “I had only trained for four years when I got into the UFC. It wasn’t like I had been around the game for ten years-plus or had a wrestling background, boxing fights or judo tournaments. I didn’t have any of that. I trained MMA for four years when I walked in and fought an Olympian (Sara McMann). So a big part of me felt like I didn’t belong there quite yet. And it was hard to shake. It took my brain a while to catch up where I was at.”

But being a favorite to win the flyweight tournament on the show and as a seasoned competitor with a target on her back, Murphy got a dose of reality quick. She’s no newbie. She belongs here. And now she knows it.

Murphy’s humility is admirable in a world where fighters with half her resume do twice the boasting, but the 34-year-old’s mindset may have been a hurdle during her UFC run thus far, which has resulted in a 1-3 record. Sure, she earned her call to the big show with an 8-0 MMA run that included the Invicta title and three wins in the promotion, but feeling that she was fighting an uphill battle experience wise kept her from reaching her potential earlier.

Not that her performances showed it. Despite her record, Murphy could have conceivably won each of the three close decisions she dropped to Sara McMann, Liz Carmouche and Katlyn Chookagian. In fact, the MMADecisions.com site, which polls media members for their verdicts, had Murphy taking the Carmouche fight by a 10-3 nod and only losing to McMann by a margin of 7-4. This isn’t lost on Murphy. 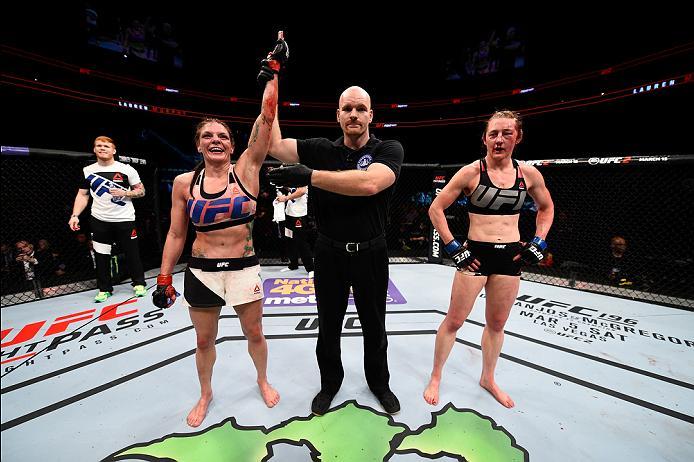 That didn’t help her after the Chookagian loss in July 2016. Murphy remained on the roster, but there were no fights on the horizon. It was a classic case of the cold, hard numbers not telling the whole story.

“For a long time, I would be talking to my husband or my teammates or anybody about my time in the UFC, and I would say, ‘I went 1-3, but…’ ‘We had some really close fights, but…’ And I would tell myself over and over again that I won those fights, and that yeah, Chookagian beat me but I took that fight on short notice. So there were all these reasons why I felt like it wasn’t quite fair.”

Enter Murphy’s head coach at the MMA Lab in Arizona, John Crouch, who told her to put those fights in the past and move on. Eventually, Murphy agreed.

“I just realized that it’s pointless,” she said. “There’s no point in being sad and giving all these explanations about what kind of fighter I am. I just have to stay positive and then look forward. So my next fight, I’m going to show that I’m even better than the Lauren Murphy that took Sara McMann to a split decision. I’m the Lauren Murphy now that could have won those fights decisively.”

And while it still remains to be seen what that fight will be, as Murphy first navigates her way through the TUF 26 tournament, it will be at 125 pounds a weight class she has had her eye on for a while. And when it was announced that the UFC was adopting the division and crowning a new champion through TUF, Murphy was a little excited. 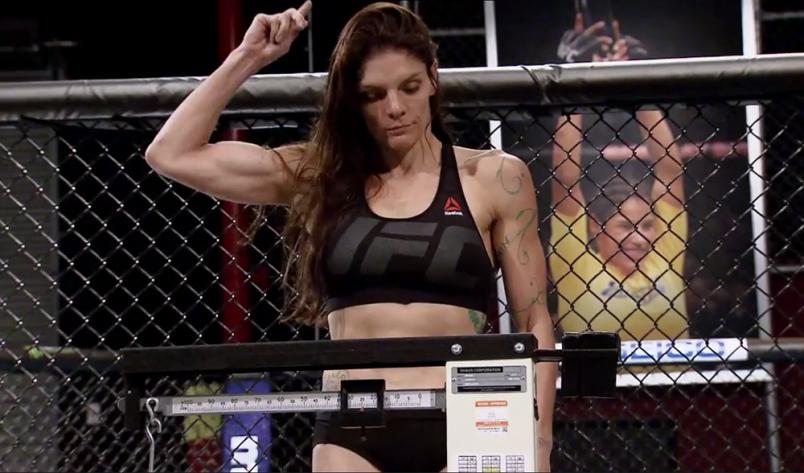 “We’ve actually known for a while that I should probably be at flyweight,” she said. “So when they announced that they were opening up the division and I found out that it was going to be on The Ultimate Fighter – which I always wanted to do – and it was going to be for the belt, I was skipping around the gym and singing and talking to people because I was so excited.”

Singing and skipping certainly constitutes excited, but there were some hurdles to deal with as she was forced to be away from her husband and son for six weeks in Las Vegas.

“Leaving the family was hard, it was harder than I thought it would be,” she said. “I’m really close to my husband, we say we’re like an old pair of shoes – we just go together – and I thought I’m gonna basically go do a fight camp, no big deal. It was a big deal. I really struggled with not having my family with me. My son and my husband are the most important things in my life and I missed them even more than I thought I would – by a lot.”

Murphy has come back from rougher circumstances, though, and while her past battles with addiction have been well documented, she has no problem telling her story again for viewers of TUF.

“Being sober now, part of my purpose is to let people know that there’s hope, and it comes in all different forms,” Murphy said. “If somebody’s watching and they’re struggling with drugs and alcohol or maybe they have a loved one who is or maybe they’re just having a bad day in their sobriety, if it brings them a little bit of hope, that’s my purpose now. So I really don’t mind sharing my story. It was difficult to get sober, it really was, and I had a lot of help.”

But that’s the past. So is her 1-3 UFC record. It’s all about the next fight now, and Lauren Murphy can’t wait for it.

“Those days are behind me, those fights are behind me and I’m gonna win my next one, either with a finish or it’s going to be so decisive that the judges won’t have a question in their mind,” she said. “That’s how much better I’ve gotten.”