The Return of Brian Bowles

"I feel like I’m proven, but I’ve been out for a while and I’ve fallen to the back of people’s minds, so I gotta come out and shine and do well." 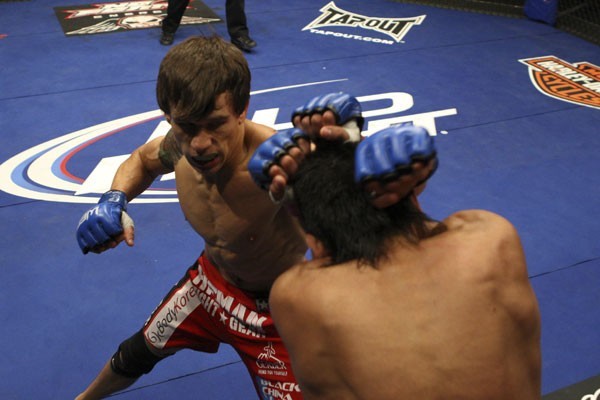 The words may change, but to Brian Bowles they all mean the same. So when he’s talking about the year he’s been out of competition due to injury, there is no silver lining.

“It’s been terrible,” said Bowles of his time on the disabled list. “I broke my hand, then I broke my foot and it’s been awful just sitting around. I was a fighter who can’t fight. I would sit around and not do anything but wishing I was back in there. It’s been miserable.”

Terrible. Awful. Miserable. You get the picture. What made it even worse was that it’s been nearly 12 months to the day of waiting to get the taste of his last fight, a second round stoppage defeat against Dominick Cruz, out of his mouth. Not only did he enter that fight with a rib injury, but he left it with a broken right hand, forcing him to remain in his corner at the bell for the third round, relinquishing his WEC bantamweight title in the process.

“I think if I would have just gone out there and broke my hand, I probably could have kept going, but all the injuries that I had added up to me pretty much being worthless out there,” said Bowles, who was making the first defense of his crown against Cruz in March of 2010.

The soft-spoken bantamweight from Athens, Georgia admits that “a lot of people have judged me and said different things,” about the ending to the Cruz bout, but as he explains, he was really in a no-win situation against a dangerous foe who was going to have target practice on him if he would have continued.

“My gameplan was to go out there and keep the fight standing and try to knock him out,” he said. “That was my mindset and as soon as I broke my hand, it was like a meltdown. I was standing out there getting beat on and I couldn’t grab him, wrestle or punch. It was going to be like letting someone punch you in the face for 10-15 minutes.”

The loss was Bowles’ first in nine fights, and followed a string of excellence that saw him run through the bantamweight division like Jose Aldo did through the WEC’s featherweight class. Charlie Valencia, Marcos Galvao, Damacio Page, Will Ribeiro, and Miguel Angel Torres all fell to Bowles, and all were finished by knockout or submission. His first round KO of Torres in August of 2009 stunned the MMA world, but as easy as he made it look, Bowles’ journey to the top was anything but easy.

“It really takes over your whole life,” said Bowles, who trains with the Singer brothers, Adam and Rory at the Hardcore Gym in Athens. “I’ll do interviews and people will ask ‘well, what do you do for fun?’ And I don’t really do much for fun. The days I’m off when I could do fun things are the days that I just rest and lay around. When you train all day every day, if you’re not training, you’re lying around, resting or eating and recuperating so you can train more. It takes over your whole life and it’s gotta be your whole life if you want to achieve the goals that you set.”

Bowles, 30, made it to the top once. Now the goal is to do it again. A November 2010 bout against Wagnney Fabiano in the WEC was scrapped when Bowles broke his foot in training, but this Thursday he will make his long-awaited return to competition against a familiar face in Page, who he previously submitted in August of 2008.

“I watch a lot of the 35ers fight and I didn’t know if I would ever fight him again or not, but I kept my eye on him,” said Bowles of Page. “He’s had some pretty good fights and he knocks people out, he’s dangerous, so you’ve just got to be careful with that.”

And he’s not about to look past his opponent just because he’s beaten him before.

“I never take anybody lightly,” he said. “Just because I beat him one time doesn’t mean I can beat him again. The way I look at it is that he’s coming for revenge, so I’ve gotta train hard and make sure that he doesn’t get what he’s looking for. I’ll have to prove that I’m the better fighter and come out with the win again.”

Just putting on the gloves and getting back to work is probably enough reason for Bowles to get excited about this week’s bout, but when you throw in that he will be making his UFC debut as well, those terrible, awful, and miserable days seem far, far away.

“I’ve been kinda expecting it,” said Bowles of last year’s WEC / UFC merge. “The rumors went around for a little bit, and usually when those rumors go around, it ends up being true. I was waiting for it and waiting for it, and hoping it would come along and it finally did. I’m excited and I can’t wait to get out there. The crowds are bigger and even though I know and most of the real fans knew that Cruz is the real champ, when I was the champ, I would get questions like ‘when are you gonna fight for the UFC?’ So now I don’t have to put up with that anymore.”

What he will have to deal with is reintroducing himself to fight fans again. This is a very ‘what have you done for me lately’ culture, and Bowles quickly found that out in the aftermath of the Cruz bout. Some thought that his low profile in the media was self-imposed, but as he explains, that wasn’t necessarily the case.

“Not a lot of people were asking,” he said. “I usually like to wait a little bit after my fight to give my mind a rest and quit thinking about fighting for a minute, but then after that, people kinda moved on.  I had a few (interviews) set up and then they would fall through, and it was just something that happened – nothing that I had planned.”

The phone should be ringing off the hook soon enough though, especially if Bowles can recapture the buzz that he had around him when he was tearing through the WEC. And while he’s already paid his dues, he’s got no problem giving folks a little reminder as to why they should be paying attention.

“I’ve already proven myself,” said Bowles. “I’ve already been the champ and it wasn’t an easy road for me. Every fight I had was tough. Miguel was a dominant champ and I beat him, and everybody I had leading up to him was tough. It’s not like I fought a bunch of chumps to get where I’m at. So I feel like I’m proven, but I’ve been out for a while and I’ve fallen to the back of people’s minds, so I gotta come out and shine and do well and remind people that I’m here.”