"I’ve been competing my whole life and it’s all you know and all you
think about. I can’t see myself doing anything else unless it’s
competitive." - CB Dollaway

He hasn’t won a world title yet, headlined a UFC event, or cracked the top 15 in the middleweight division, but it’s hard to find a better comeback story than that of CB Dollaway.

With all due respect to LL Cool J, you may not even want to call it a comeback, because Dollaway has been here for years, but after blasting out of the gates with wins in five of his first seven UFC fights after making it to the finals of The Ultimate Fighter’s seventh season, “The Doberman” would get knocked out in back-to-back bouts by Mark Munoz and Jared Hamman in 2011, putting him in that unenviable No Man’s Land called “the middle of the pack.”

Not many people talk about it, especially not fighters, but you know it’s there. You’re not on the verge of getting cut, but you’re not on the right path to a title shot either. You’re just stuck in the middle. To make matters worse, Dollaway tore the labrum in his hip in the Hamman fight, forcing surgery and putting him on the sidelines.

Nine months later, the comeback began with a win over Jason “Mayhem” Miller, and he was even more impressive in a Fight of the Night victory in Brazil over Daniel Sarafian. Disaster would strike again when he had to get a full ankle reconstruction, and Dollaway admits that there were some dark moments.

“I wondered, ‘Do I have this in me,’” said Dollaway, who was stuck in a hard cast for nearly three months. “You’re sitting on the couch and obviously getting a little depressed. Sitting around, putting weight on, and it’s not a good place to be. I had my wife Jenny supporting me throughout it and helping out, doing anything and everything to make life easier. My teammates were also there supporting me, and I got through it.”

And as soon as he was given the green light to resume training, he raced back to the Power MMA gym in Arizona, and on four weeks’ notice he took a fight with Tim Boetsch at UFC 166 last October. Dollaway lost a split decision, but enough people thought he won to make it seem like a victory everywhere but in his paycheck, and in March, he returned to Brazil and left the judges out of it, knocking out Cezar Ferreira in 39 seconds.

The middle of the pack days were over. CB Dollaway was movin’ on up.

“It’s pretty great,” said Dollaway, who faces Francis Carmont in the co-main event of UFC Fight Night in Berlin this Saturday. “I’m finally getting to show my full potential and I’m healthy again, staying consistent, and getting a lot of fights in. The last couple years I struggled with injuries and those were huge setbacks. It was hard to stay consistent and keep getting better, and obviously this is a sport where if you’re not progressing, you’re gonna fall behind.” 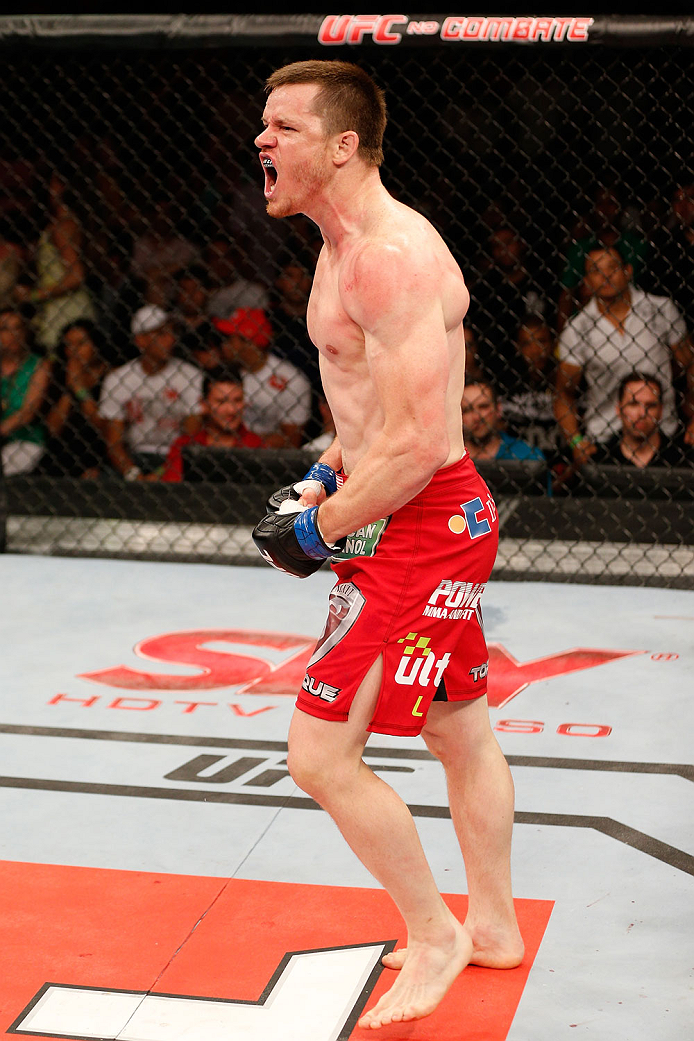 That’s a scary prospect in this sport, because if you fall behind, you lose fights you never would have lost earlier in your career, and if a few of those pile up, you’re out of a job. And to make matters worse, Dollaway began to see that some folks he thought were in his corner were only there when it was smooth sailing.

“It shows you who’s really there for the long haul,” he said. “Who are the people that stuck around and were still supporting you and staying by your side when you’re going through your tough times? It opens your eyes up and it actually helped me cut some ties with people and get really focused on my career. I’ve grown up a lot in the past couple years and maybe it was a blessing in disguise.”

Maybe, but it’s not something he would like to go through again anytime soon, no matter how many disguised blessings there are. But at this point, you get the impression that the worst is over for the 30-year-old husband and father, and that now he can concentrate on taking his career to the next level, a task he’ll have a bit of help with.

“I owe a lot to my teammates and my gym, Power MMA,” said Dollaway. “We have a lot of great people there. One guy in particular, Jason Kamens, our strength coach, he’s been helping me with my diet and showing me how to eat right. I thought I was eating the right things, and I didn’t really know how to diet or how to do things right. Now he’s helped me dial that in, and he’s showed me how to strength train for performance as opposed to lifting like a bodybuilder. He came from a Kinesiology background, so he brings that kind of science to make you perform well. Jose Benavidez, my boxing coach, we’ve been working together for almost two years and we’re starting to see the progression there. And Aaron Simpson, our head coach, he’s making the right things happen, and we’ve got a really solid program going on at Power MMA and a solid structure of teammates. We’ve got Ryan Bader, Ryan Jimmo is down here now, and things are growing and progressing and you’re seeing it help out in our MMA careers.”

That’s something Dollaway has again – a career. When he was sidelined and questioning whether his body was going to go along with what his head and heart wanted to do, it wasn’t always a given that he would still be able to compete. And when asked why go through all that, his response was instant.

“It’s the only thing you know. Since I was five years old as a wrestler, I wrestled all the way through college at Arizona State, I’ve been competing my whole life and it’s all you know and all you think about. I can’t see myself doing anything else unless it’s competitive. This is something I love.”

And now he’s back and has no intention of going back to the middle of the pack. It’s onward and upward from here on out. So how does this comeback story end?

“Hopefully with a championship belt,” said Dollaway. “You read a lot of quotes, and one in particular is ‘the biggest disappointment in life is to set your goals too low and achieve them.’ So you shoot for the moon and land amongst the stars. You just have to believe you can do it. I’ve been around other champions, and it’s a matter of believing you can do it even if no one believes. If everyone listened to what other people said, no one would do anything.”